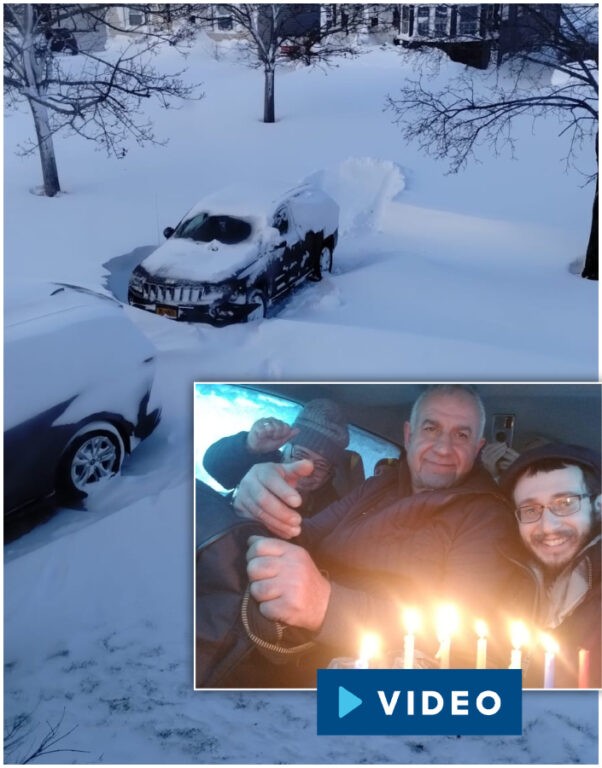 As a blizzard of historic proportions batters Buffalo, New York, leaving many dead, shliach Rabbi Mendel Gurary is thankful for the Chanukah miracle that kept him safe and secure.

As a blizzard of historic proportions batters Buffalo, New York, leaving many dead, shliach Rabbi Mendel Gurary is thankful for the miracle that kept him safe and secure.

“This past Friday, Buffalo was under many inches of snow, with heavy winds blowing the snow in all directions Having brought my family earlier, I began to head from my house to the Chabad House at the University of Buffalo, a 15-minute drive from my house, where I planned to stay for Shabbos.”

Gurary says that as he left his house, the roads were almost impossible to drive on, with near-zero visibility caused by snow and high winds.

“A short while into my drive, I noticed that my gas was on low so I pulled into a gas station to fuel up quickly. Once there, the thick snow caused my car to get stuck and there was nothing I could do to get it out,” he recalled

With Shabbos rapidly approaching, he called a good friend and community member who owns a snow plow truck, Mr. Fischel Goldstein, who offered at great mesiras nefesh to come and help. Then, as he was waiting he saw other cars drive up to the gas station. They had been in the middle of traveling and were unable to continue due to the storm.

“One of the other people who stopped at the gas station came to me and said, ‘I see you have a menorah on your car. I am also Jewish!’ We started talking and I learned that he was driving from Toronto to New York when he got stuck in Buffalo. I told this man that someone is on the way to help me get out. I’m sure he can help you also and then why don’t you come to the Chabad house for Shabbos?”

While the two were waiting, Gurary asked the second man if he would like to put on tefillin, so they could do a mitzvah while they wait, and the man happily agreed.

“After some time Mr. Goldstein arrived to pick us up. He was thoughtful enough to pick up everyone who got stuck at the gas station and told them to abandon their cars until the storm was over,” Gurary says.

But by then, the roads were even worse. Visibility had hit zero, and you couldn’t even see right in front of you. Their troubles were far from over, as after driving for a bit, the truck went off the road and ended up grounded in a ditch.

I was getting worried as it was getting close to Shabbos and I still needed to light the menorah. Baruch Hashem, I had a mivtzoim menorah with me and was able to light the menorah in the car! We were stuck on the side of the road for a while until an Amherst auxiliary police spotted them and brought the occupants safely to the Chabad house, just in time for Shabbos.

While the Chabad house usually hosts college students, none were there this Shabbos, as they were on Winter vacation. Together with the rescued snowbound guests, Rabbi Gurary’s in-laws who were visiting from Monsey, the Chabad house managed to have a minyan for Shabbos. The guests enjoyed the Shabbos seudos at Chabad, as well.

“One of the men said that this was a very special Shabbos for him and he had never experienced a Shabbos like this before,” Rabbi Gurary says.

After a few days when the storm calmed down a bit, with a lot of effort and with Hashem’s help everyone was able to take their cars out of the gas station and make it safely home.

“Looking back, one thing that amazes me is that thanks to the menorah on my car, we were able to help another stranded Yid. So the pirsumei nissa didn’t only help other Yidden b’ruchniyus, it also saved another Yid from physical danger.”

“In addition, a lesson I took from here is to always make sure to have a menorah with you on Chanukah. You might end up needing it for yourself…” Rabbi Gurary said.

“Chanukah is a time of miracles, to be grateful… I want to thank, first of all, Hashem, for making this neis,” Rabbi Gurary said. “and I’m grateful to the people who helped. Mr. Fishel Goldstein, who with mesiras nefesh came in the blizzard to take us out, and the police who took us out, as well as my in-laws for hosting and preparing food for the guests.”