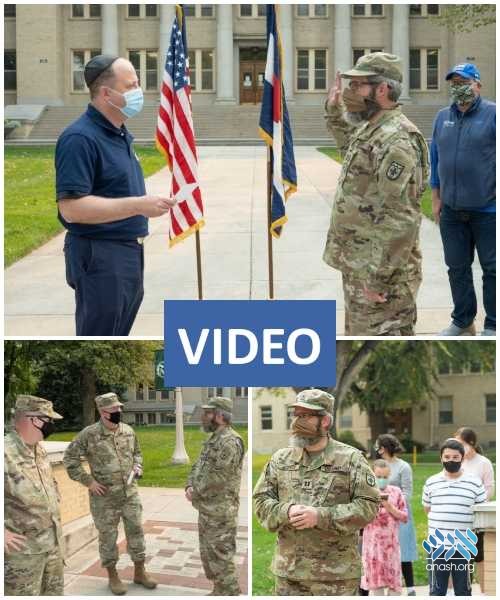 Dressed in tan military fatigues, Shliach Rabbi Yerachmiel Gorelik was sworn in as a Captain in the Colorado National Guard by Gov. Jared Polis, becoming the first rabbi in living memory to hold that position.

Dressed in tan military fatigues, Rabbi Yerachmiel Gorelik was sworn in as a Captain in the Colorado National Guard by Gov. Jared Polis Friday, on Oct. 2, at Colorado State University.

In addition to his work as rabbi and director of the Chabad Jewish Center of Northern Colorado, Gorelik will now serve as a Chaplain for the National Guard, offering spiritual guidance to service members.

“As your Commander-in-Chief, thank you, Rabbi Gorelik, for your willingness to serve,” Gov. Polis told him. “I thank you for being there for the challenge of meeting the spiritual needs of our guardsmen.”

Col. Dave Nagel said Rabbi Gorelik will be the only rabbi in anyone’s memory to serve as a chaplain in the Colorado National Guard. Gorelik had contacted Nagel and after speaking to him, Nagel said: “We just had to have him.”

McConnell noted Gorelik’s years of service to the University and the Northern Colorado region and his deep commitment to supporting Jewish students at CSU.

“It’s an honor to serve and I hope that it inspires others of ways to give and live higher than self,” Rabbi Gorelik said.