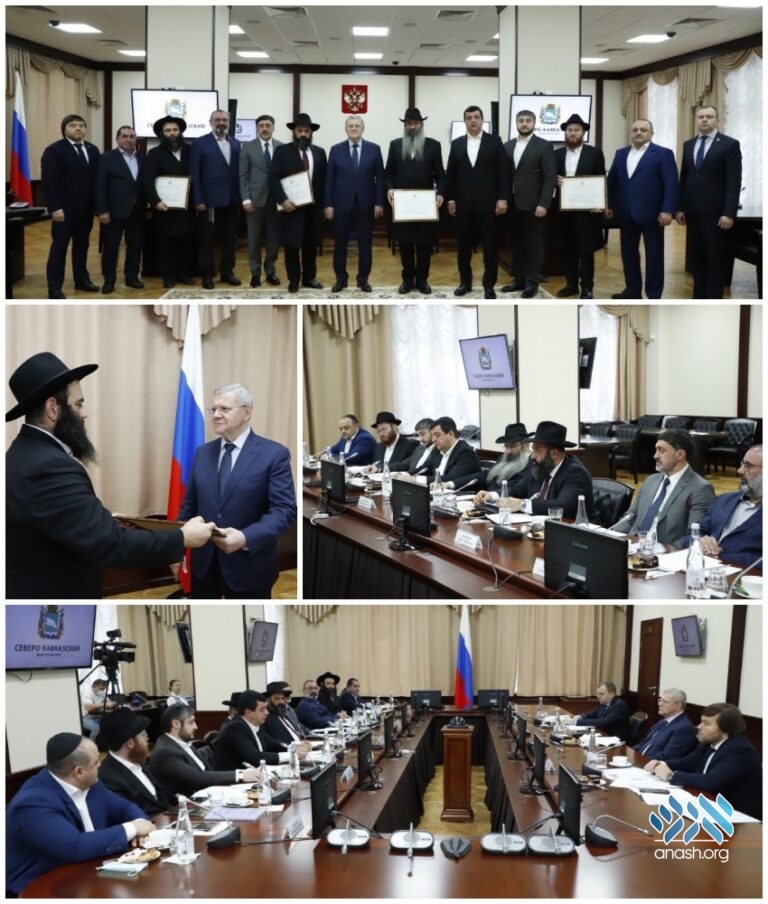 Rabbi Ovadya Isakov who survived an assassination attempt near his home in Dagestan shared the details of his miraculous recovery with Kremlin representatives during a recent meeting.

A special meeting was held in the spacious offices of a government building in the center of Pytigorsk city. Yuri Chaika, the Kremlin’s representative in the Caucasus met with the Rabbis and community leaders of the North Caucasus Federal District of Russia.

The Caucasus borders Europe and Asia and reaches as far as Turkey and Iran. In its Russian part stands Europe’s tallest mountain. The Caucasus has the most languages in the world and a very rich Jewish history. The entire area is of great ecological importance.

Since the rebirth of Russian Jewry about twenty years ago, the Chief Rabbi of Russia Berel Lazar sent shluchim to serve in its big cities. Most of them were born and raised in the Caucasus and know and appreciate its unique local mentality. They studied at yeshivas in Moscow where they were certified to teach. At the same time he established Jewish communities under the “Federation of Jewish Communities in Russia”, to which he sent yeshiva students to assist with Jewish holidays, prayers, Torah classes and Jewish traditions.

Since Yuri Chaika was appointed by the President of Russia as the Kremlin’s representative for all matters of the Caucasus, after many years in which he served as Russia’s Chief Attorney, he requested to meet the Rabbis and Community Leaders in order to hear from them about their needs.

At the meeting that was held in his office together with his team of deputies and personal assistants, all the Jewish community leaders in the Caucasus were present, including Rabbis and shluchim Rabbi Levi Shubayev from Nalchik, Rabbi Ovadya Isakov from Derbent, Rabbi Levi Yitzchak Friedman from Stavropol and Rabbi Akiva Chudainatov from Kislovodsk.

The conversation with the rabbis continued far beyond the predetermined time, with a request to Rabbi Ovadya Isakov to share the details of his miraculous survival after a terrorist from nearby Chechnya ambushed him near his home in Dagestan.

Mr. Chaika was clearly moved by the story and praised the Jewish activities carried out in the entire Caucasian region. Their peaceful manners with all religions are an example for other communities in helping others.

In conclusion, he presented the Rabbis with certificates of appreciation in the name of the region’s general population for their dedication.