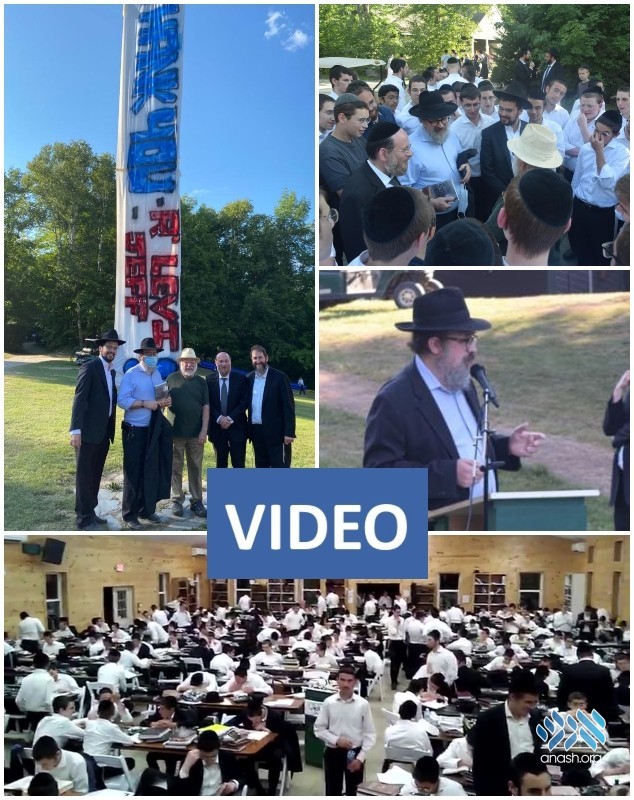 A Litvishe Summer learning program was all ready and set to go when the New Hampshire Department of Health told them that they wouldn’t be issuing permits. Shliach Rabbi Levi Krinsky got that decision overturned.

New Hampshire Shliach Rabbi Levi Krinsky is used to dealing with new situations every summer. But what happened earlier this month, was still a surprise for him.

Every year, hundreds of Frum vacationers travel to white mountains in New Hampshire to spend their summer. When they look for a shul, a minyan or kosher food, they know they can turn to Chabad. Indeed, Rabbi Krinsky and the shluchim in the area provide all Jewish needs for the annual visitors.

This year, with many families desperate to leave the city due to COVID-19, the amount of vacationers was almost double that of a regular year. Rabbi Krinsky and staff spent many hours over the summer fielding calls from the many visitors.

“One day, a few weeks ago, I received a call from a New Jersey area code,” Rabbi Krinsky told Anash.org. “I almost didn’t pick up the phone, because I was overwhelmed with calls from those areas throughout the entire summer.”

For some inexplicable reason, he picked up the phone, and he was happy he did.

“On the other end of the line was a man who identified himself as Rabbi Mintz. He said he was the head of a Litvishe Masmidim summer program that had been planning to bring 400 bochurim to New Hampshire after Tisha B’av to spend the next few weeks immersed in learning,” Rabbi Krinsky said.

Rabbi Mintz told the shliach that the camp was fully arranged, and the parents had already paid the tuition, and all the paperwork was signed, sealed and delivered for the rental. But then, suddenly, the top inspector from New Hampshire Department of Health had told him that it was too late to have the camp inspected and issued a health permit for the summer. If they did not come up with the permits within a few days, they would be forced to cancel the program and refund all the parents, he said.

“I know this is a uphill battle, but perhaps, as Rov of New Hampshire, you could help us overcome this challenge,” Rabbi Mintz said.

Hearing the predicament, Rabbi Krinsky said he would do whatever he could to help, although he had no idea how he could be of assistance. He began wracking his brain for anyone he knew who could put pressure on the DOH and get the camp their permits in time to open.

“I called an acquaintance who had connections with the local government, and after he inquired into the possibility of receiving permits, he was told it was a fait accompli and it won’t happen this year,” Rabbi Krinsky said.

It was then that Rabbi Krinsky remembered Professor Jeff Salloway, a well-connected individual who had attended his Chabad house in the past. He decided to give him a call.

“Professor Salloway told me that he ‘just happened’ to be on the Governor’s reopening council, and he would speak to a few others and see if he could get those permits,” Rabbi Krinsky said.

Before long, Professor Salloway called him back with the news that he had reached out and had been told that the DOH will do everything in their power to have the issue resolved in time. Indeed, within 48 hours, the permits were issued, allowing the camp to open.

Rabbi Mintz and the rest of the staff profusely thanked Chabad and Rabbi Krinsky for not leaving any stone unturned to get them the permission they needed. They sent them many messages of thanks, including a video of hundreds of bochurim learning one night during the program, with the message “This is all your zchus and the zchus of your baalie batim. May the zchus hatorah protect you and all that intervened on our behalf.”

The camp administrators also invited them both to come and speak for them, giving them an opportunity to express their gratitude in person.

“When we pulled up to the camp, we were greeted by a huge home-made banner proclaiming “Thank You Jeff and R’ Levi,” Rabbi Krinsky related. “The bochurim and staff gave us a hero’s welcome, and they all gathered around us to hear our version of the events.”

The heads of the summer program then invited them to speak to the campers. Hundreds of boys sat in rapt attention as Rabbi Krinsky and Professor Salloway spoke.

“Professor Salloway had assumed that it was a Lubavitch group, and actually ended up talking about the greatness of the Rebbe more than I did,” Rabbi Krinsky recalled with a chuckle. “All in all, it was a beautiful sight, and the bochurim and married staff were thrilled to be able to express their appreciation.”

“It was a roller-coaster ride of an experience, pulling off those permits. But helping Yidden is what we are all here for. It’s all in a day’s work for a shliach,” he said.

VIDEO: The video of learning sent to Rabbi Krinsky