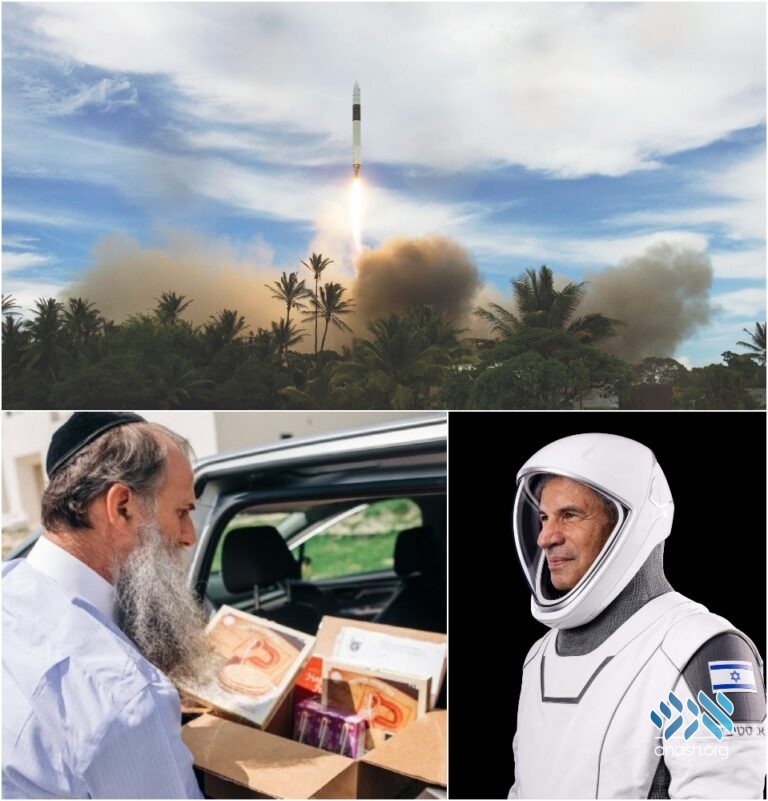 Jewish astronaut Etyan Stibbe, the second ever Israeli astronaut, will be joining a mission to space right before Pesach, so he turned to shliach Rabbi Zvi Konikov to help him with Pesach supplies.

Eating hand-made shmurah matzah in space during Passover may sound like something out of a sci-fi film, but when four astronauts lift off tomorrow on the Axiom Space mission to the International Space Station that is exactly what will happen, given the mission’s timing around the start of Passover, which begins this year on at sundown on Friday, April 15.

Taking the matzah will be Israeli astronaut Etyan Stibbe, 64. The former Israeli Air Force fighter pilot and philanthropist was given a box of hand made shmurah matzah as well as other provisions for Passover by Rabbi Zvi Konikov of Chabad of the Space & Treasure Coasts.

“It’s very exciting,” said Konikov. “As a Chabad-Lubavitch emissary for 31 years, I’ve given out matzah in every single place and every single scenario, now to provide matzah to a Jew who is boarding this space flight and connecting with the International Space Station” is quite different.

Not only is Stibbe taking a symbolic piece of Judaism with him to space, he will have the opportunity to fulfill the commandment of eating the matzah there as well, which, said Konikov, “is to me out of this world.”

That Stibbe wanted to have the matzah with him on the International Space Station, “sends a powerful message,” the rabbi continued. “If it’s important that an astronaut, with so much on his mind, just three days before the start of his mission is getting matzah, that sends a powerful message to every Jew wherever they are that they should also make sure they have everything they need for Passover.”

During a press conference earlier this week, Stibbe was asked about celebrating Passover in space and he said “it’s a new thing,” given the mission was postponed to April 8.

“The seder, Passover, is all about freedom which is a value we celebrate annually and remind ourselves about the importance of freedom, [which is] based on a 3,000-year-old story when Moses said the famous sentence ‘Let my people go,’ ” he said.

Stibbe was friends with the first Israeli ever to go to space, astronaut Ilan Ramon who died tragically during a failed landing after a mission in space. Pages of a journal Ramon kept while in space were discovered after the crash and Stibbe will be carrying several of them with him into space.

He noted that one of the mitzvot of the Passover seder is to have four cups of wine, and so he is taking a wine glass with him. “But,” he joked, “I don’t think I’ll find any wine in the Space Station.”

Thanks to Konikov, though, he will have four small cartons of grape juice, though the glass will still be superfluous, as liquids need to be sipped, not poured at zero gravity. What will happen to the matzah crumbs, well that remains to be seen.