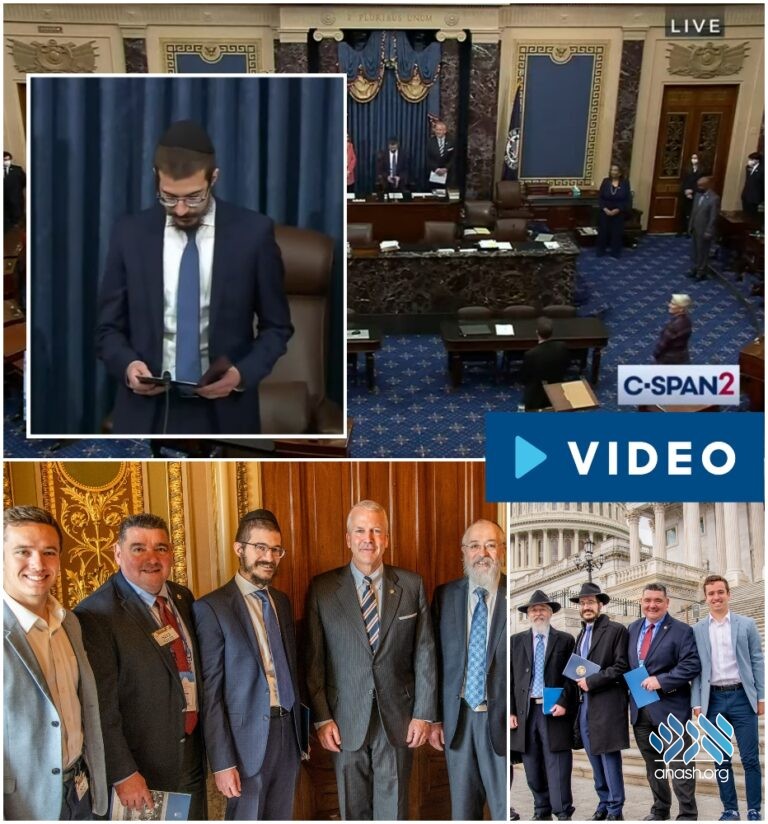 Rabbi Mendy Greenberg, shliach to Palmer, Alaska opened the United States Senate in Washington, DC on Thursday with a prayer in honor of Yud Alef Nissan.

Just days ahead of the Rebbe’s 120th birthday on Yud Alef Nissan, U.S. Senator from Alaska Dan Sullivan honored a Chabad shliach from his home state to open the Senate with a prayer.

Rabbi Mendy Greenberg, shliach to Palmer, Alaska opened the United States Senate in Washington, DC on Thursday with a prayer in honor of Yud Alef Nissan.

“Almighty G-d, Master of the Universe, we stand before you, in prayer,” Rabbi Greenberg began. “In these troubling times when innocent men, women, and children, have lost their lives, and millions fled their homeland due to the catastrophic war in Ukraine.”

Rabbi Greenberg invoked the Rebbe’s new Kapitel in Tehillim Chapter 121 “I lift my eyes to the mountains- from where will my help come? My help will come from the Lord, Maker of heaven and earth.”

“In 1978, this honorable body established the Rebbe’s birthday as Education and Sharing Day USA and is proclaimed annually by the President of the United States, in recognition of the Rebbe’s global campaign to bring awareness and educate our youth about these ethical values of the Seven Noahide Laws as the basis for a just and compassionate society.

Following the invocation, Senator Sullivan highlighted the incredible work of all the Chabad shluchim in Alaska led by Rabbi Yosef and Esty Greenberg. “What they do for our communities throughout Alaska is so meaningful and touches so many lives.”

“They are incredible in terms of bringing all Alaskans together. I offer my deepest thanks for the example they set for the entire state of Alaska,” he concluded.

Click here to watch the remarks from the Alaska Senator in praise of Chabad and Rabbi Greenberg.