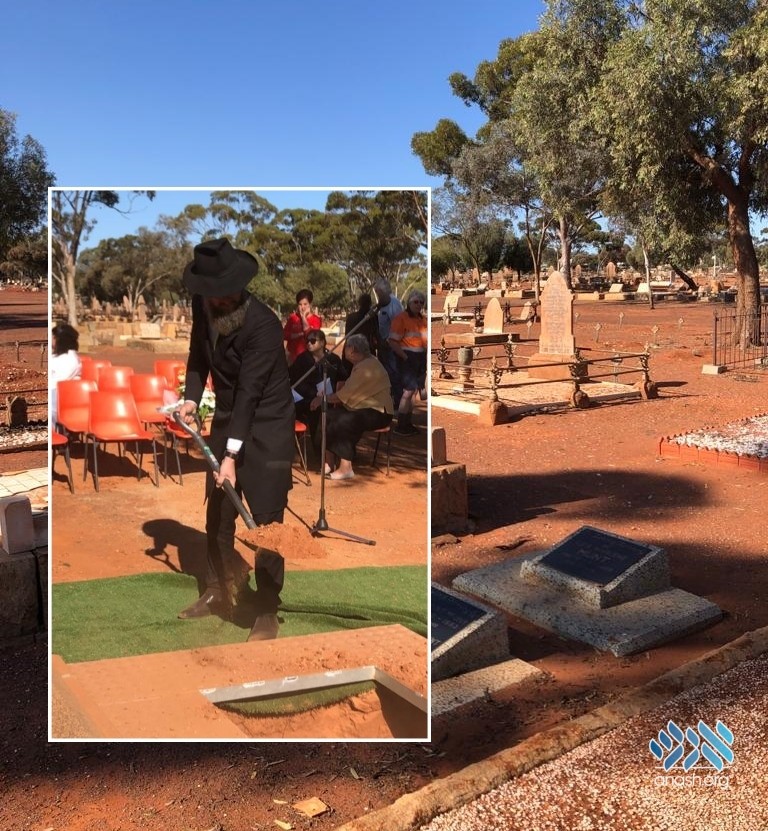 When Dr. Avon Moffson passed away on Sukkos, the local funeral home knew that he needed a Jewish burial. But the closest Chevra Kadisha was 600 kilometers away.

When Dr. Avon Moffson recently passed away on Sukkos, the Goldfields Funeral home knew that he needed a Jewish burial. Located in Kalgoorlie, Western Australia, Dr Moffson had practiced medicine there for many years since immigrating from South Africa.

Although once home to a thriving Jewish hub in the days of the Gold Rush, the Jewish population in Kalgoorlie has since dwindled, with just 6 people identifying as Jewish in the entire Kalgoorlie-Boulder area in the most recent census.

Nowadays, the nearest Jewish community to Kalgoorlie is in Perth, some 600 kilometers away.

Providing any Jewish services to the region is challenging, and certainly organizing a funeral.

The Perth Chevra Kadisha (Jewish Burial Society) was contacted, and immediately got to work, liaising with the local funeral home in Kalgoorlie and informing them of the various traditions and practices in bringing a Jew to their final resting place.

One of the traditions of a Jewish burial is having a Minyan present – 10 Jewish men who can answer Amen to the Kaddish prayer that is recited after the deceased is laid to rest. In Perth this is not a challenge, but in a place like Kalgoorlie – not so easy!

A call was put out on various social media channels for any Jewish people in the area to attend the funeral, and within a short time the posts had been viewed and shared by thousands of people.

On Thursday, 13 October, a handful of people led by Rabbi Shalom White of Chabad of Western Australia, together with Mike Gomer, President of the Perth Chevra Kadisha, jumped into a car and made the almost-7-hour trip up the Great Eastern Highway to Kalgoorlie.

Interestingly, they took along a very special item with them. Being that the funeral was taking place on the Jewish Holiday of Sukkot, they brought along a small “pop-up” Sukkah that can be set up anywhere, as throughout the 7 day Holiday, we are careful to only eat and drink in a Sukkah.

On arrival in Kalgoorlie, a service was held for the late Dr Moffson, and he was laid to rest in the red earth of the Jewish section in the Kalgoorlie cemetery.

It was a special moment, as a Jew was able to be interred according to Jewish law, all the way out in outback Australia.

The small team thanked the Goldfields Funerals for their exceptional assistance and cooperation throughout the proceedings, and then headed right back to Perth, arriving back home very late. They were sure exhausted from the trip, but were feeling very fulfilled after taking part in such an important Mitzvah.

The trip was an incredible testament to the care and support available to any Jew, anywhere, through life and through death. They might be living in Outback Australia, but the Jewish people have each other to rely on in a time of need.

A special thanks goes to Rabbi Shalom White and Mike Gomer and the team of volunteers that came from Perth, as well as Avi Kassman, formerly of Kalgoorlie, for ensuring that no matter where a Jew may be, they will be supported and cared for.