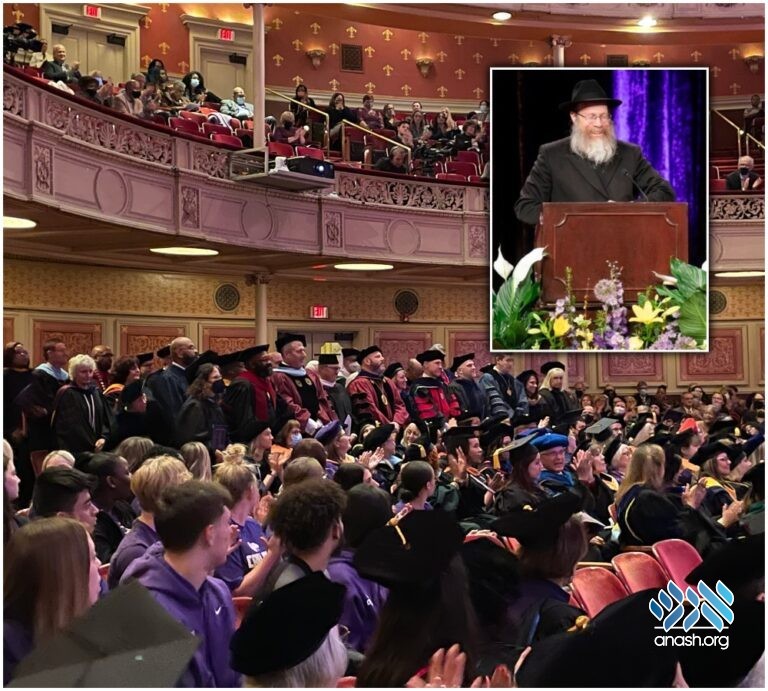 Rabbi Shmuel Weinstein, shliach to Chabad House on Campus in Pittsburgh, gave the benediction to longtime friend of Chabad, Dr. Kathy Humphrey, at the ceremony inaugurating her as 11th president of Carlow University.

“…On this 8th day [of Parshas Shemini], the Jewish people celebrated with a grand inauguration. What amazing timing- Divine Providence- that your inauguration is occurring at this same time!”

In her previous role as Senior Vice Chancellor to the University of Pittsburgh, Dr. Humphrey has been a longtime friend of Chabad House and has done much to promote Jewish life on Campus. Working alongside Rabbi Weinstein and his wife Sara, as well as Rabbi Shmuli and Chasi Rothstein, co-directors, and Rabbi Shua and Shoshana Hoexter, JGrad directors, Dr. Humphrey has been a key player in purchasing a large sukkah in the center of campus, as well as numerous public menorahs throughout the university, and many other programs strengthening Jewish pride for students on campus.

In the summer of 2018, Dr. Humphrey joined the Weinsteins on an Administrators Trip to Israel – the first of its kind – seeing the Jewish Homeland firsthand. She was deeply moved by the experience.

On Friday, 22nd Adar – March 25th, Dr. Humphrey became the 11th President of Carlow University in Pittsburgh. Rabbi Weinstein was asked to give the benediction for this historic inauguration ceremony. Speakers included local Pittsburgh leaders from the County Executive and the Mayor to the Chancellor of the University of Pittsburgh, just to name a few. Each one spoke about Dr. Humphrey’s love for others and her sincere devotion to their success.

Rabbi Weinstein was last to speak, culminating the entire event with a message of Chassidus: explaining the meaning of the number 8, a state deeper than the natural order, and that of 11, which represents the energy of fusion, revealing the innate goodness, holiness, and potential in every aspect of G-d’s world. Rabbi Weinstein blessed Dr. Humphrey that she harnesses this G-dly energy in all that she sets out to do in her new role as President of Carlow University.

Chabad House is fortunate to have Dr. Humphrey as a partner now at Carlow University, to continue working closely in their mutual efforts to ignite further Jewish pride on all Pittsburgh campuses.

To be a part of this effort TODAY, join the Chabad House Pesach Charidy campaign: www.charidy.com/Passover2022