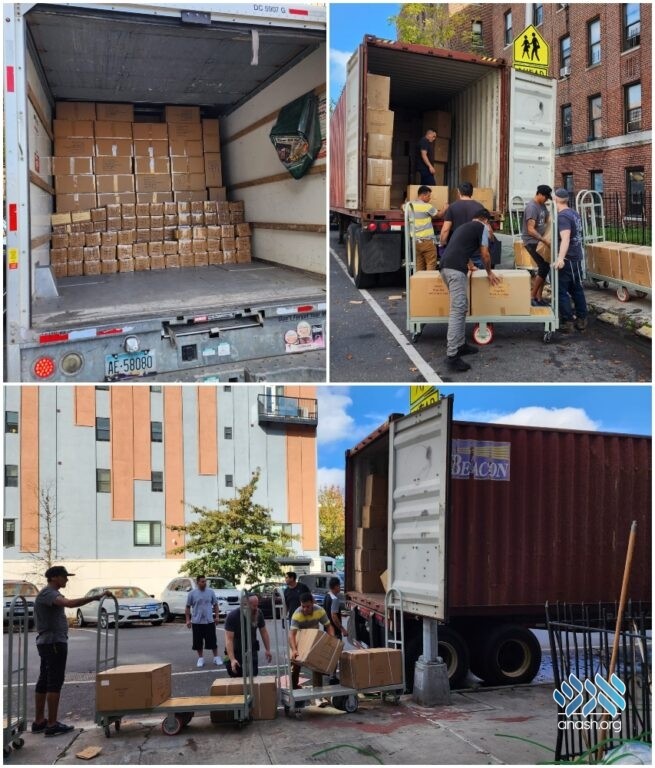 The second container of Tzivos Hashem materials, containing hundreds of thousands of supplies, prizes and rewards, arrived in Crown Heights on Wednesday.

Among the items on the container are 20,000 Rank Books, 100,000 Tzivos Hashem Medals and 28,000 Chidon Limmud  Test prizes including: The Chidon Kop card game, Chidon Bag, Chidon Leather Bookmarks, Chidon Shape Shifting Cube, and much much more.

After the container is unloaded the prizes will be packed and shipped to the schools around the world for them to distribute to their chayolim.

Peretz Lazerov and Dovie Brikman immediately got to work together with extra staff brought on board for this job, and are working hard to ensure that everything will be unloaded and shipped over the next few days.

“Its amazing to see the progress at Tzivos Hashem HQ” says Rabbi Mendel Wolowik, Chidon Director of Operations. “Boruch Hashem, the Chidon has now grown to 7048 chayolim and things are running smoother than ever.  We are looking forward to our first test in less than two weeks and hope to see great results.”

“I can only imagine the nachas Mrs. Sara Rhor has from this program,” says Rabbi Moshe Kotlarksy, Vice Chairman of Merkos L’inyonei Chinuch. “With the average child learning for 100 hours a year that’s over 700,000 of learning this year. What a huge zechus!”

“We are very grateful to Mr. George Rohr for all he does. This program is only possible because of his generous support,” he said.

“We are so proud of all these chayolim,” says Executive Director of Tzivos Hashem Rabbi Yerachmiel Benjaminson. “May the the learning of the 613 Mitzvos by all these children around the world bring about the coming of Moshiach when we will all be able to keep all 613 Mitzvos.”