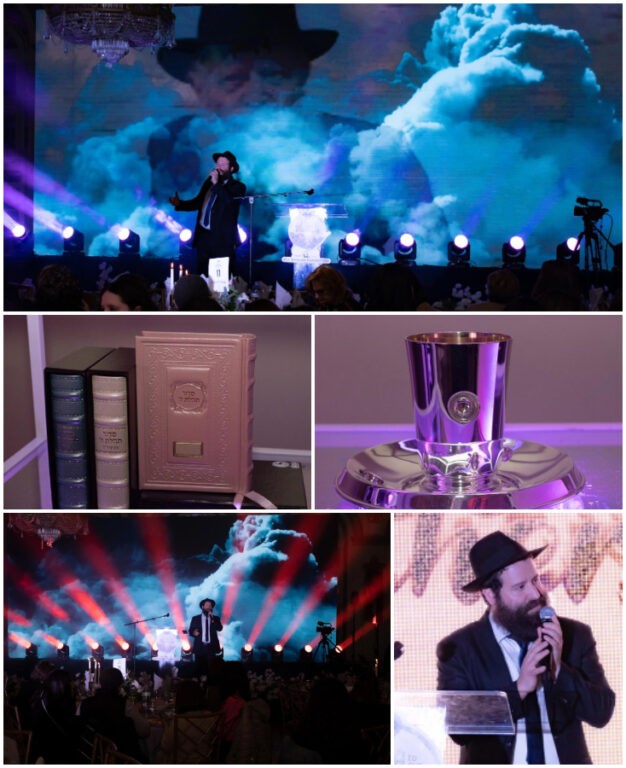 Over 650 women participated in the annual Shifra and Puah dinner in Crown Heights. During the evening, hundreds of women pledged to support the organization amounting to nearly half a million dollars.

Soft music greeted the hundreds of women who came to the halls of Oholei Torah on Sunday evening. The event was attended by American women alongside Hebrew, French, Russian and Spanish speakers. The excitement for the unique Shifra and Puah dinner could be felt in the air.

The Chasidic singer Rabbi Berel Tzucker, gave a beautiful musical performance which culminated in the singing of ‘א שיינעם חלום’ in a special Hakel style. At the end of his performance, Mrs. Bracha Sternberg, one of the directors of the Shifra and Puah organization, approached the podium and welcomed the hundreds of participants. She noted the connection between Shifra and Puah’s activities in Crown Heights to this week’s Parsha which speaks about the original Shifra and Puah, who, thanks to their work with birthing mothers, received Hashem’s blessing “ויעש להן בתים”.

Mrs. Leah Hendel, one of the organization’s directors, recited the Rebbe’s Rebbetzin’s chapters of Tehillim, and immediately afterward, the women watched video clips of the Rebbe’s Sichos regarding Torah, prayer, and charity. The videos showed the Rebbe inspiring women in the matters of Hakel and having children.

The moderator, Mrs. Maggie Rogetsky, invited Mrs. Esther Sternberg, who had the honor of being close to the Rebbe and Rebbetzin, to speak about the Rebbetzin’s involvement in providing assistance to her after birth.

“Rebbetzin Chaya Mushka was like Shifra and Puah to me. She worried for me after birth and worked on my behalf,” Mrs. Sterneberg explained. “Today, in the Shchuna, we have the Shifra and Puah organization which follows in the footsteps of Yocheved and Miriam the Tzadikot and helps all the mothers in the neighborhood during the critical period after birth.”

In a beautiful and moving video production, professional women talk about the importance of the help provided by the Shifra and Puah organization after childbirth. Mothers who received aid from Shifra and Puah shared emotional stories about the difficulties they experienced and how Shifra and Puah was their lifeline during those challenging moments.

Mrs. Bracha Sternberg then shared the enormous scope of the organization’s activities. Some people think that Shifra and Puah only distribute breakfasts to mothers. This in itself is an amazing and large-scale activity. However, the reality is that the Shifra and Puah organization provides postpartum mothers with so many services that support them after having a baby, that it is difficult to understand how one can manage without them.

The numbers summarizing the activities of Shifra and Puah over the past year then appeared on a large screen. The attendees were amazed to hear that in addition to the 8,400 breakfasts that were distributed to postpartum women, the Shifra and Puah organization organized 5,000 hours of childcare and 4,200 hours of cleaning help. On top of the household help provided, Shifra and Puah distributed 1,500 Shabbat meal portions and provided 300 nights in a home for postpartum mothers in the last year!

Chasidic singer Rabbi Berel Zucker took the stage for a moving performance of the song ‘Acheinu Kol Beit Yisrael.’ At the end of the song, the hall darkened, and a moving video appeared on the screens with the singer’s new song. The song, which is entirely in poetic and moving English, tells the story of Shifra and Puah. It describes the moving story of the Alter Rebbe who went to help a woman in labor in the midst of Yom Kippur and how the Rebbe, who was also in the midst of Yom Kippur in תשל”ז, instructed the establishment of the organization of Shifra and Puah “that will help every woman giving birth, without distinction between rich and poor.” The song paints the beautiful story of the establishment of Shifra and Puah in Crown Heights by the organization ‘Chabad Women for Hebrew Speakers.’

Mrs. Bracha Sternberg then invited Rabbi Zalman Goldstein, who spoke on behalf of the fundraising organization, to explain the unique concept of the evening; how a luxurious but free dinner can be an instrument for raising resources for the Shifra and Puah organization.

The women, who feel like partners in the organization and saw that the organization has doubled its activity tenfold in recent years and needs financial resources, happily joined in and took on a goal. The commitments ranged from $770 – to finance one birth, to $7,700 to finance ten births, and so on.

During Rabbi Goldstein’s speech, hundreds of women received beautiful folders with a series of presentations designed to help each one become a true ‘partner’ and succeed in the task of raising donations for Shifra and Puah.

The commitments of women in the audience were visible on the screen. One by one, the commitment increased – from one birth to three births, and even five births. Some women, who feel a deep partnership with the organization, took on a commitment to obtain an amount of $7,700 dollars, to cover the services for ten mothers in the coming year.

The two presenters, Mrs. Sternberg and Mrs. Rogetsky took the stage together and encouraged the women to get involved in the great women’s organization, which reaches every woman in Crown Heights, regardless of background, language, etc.

The increasing numbers appeared on the screen when suddenly Mrs. Chani Farkash, from the leadership of the organization, went to the stage to thank the dozens of volunteers. She expressed her gratitude by pledging to obtain funding for one hundred postpartum mothers in the amount of $77,000!

Women who experienced incredible amounts of help, thanks to the wonderful activities of Shifra and Puah, went on stage and shared their personal stories with the audience. At the end of their stories, they announced their contributions of large sums to the organization’s activities.

At the end of the evening, the organizers thanked everyone who was involved in the production of this wonderful evening – starting with the managers of the organization, the volunteers, the production team who put together an amazing event, the delicious catering, and the dozens of women and girls who took care of all the little details.

The hundreds of women who entered the hall as ‘guests’ of Shifra and Puah – left at the end of the extraordinary event as partners and active ambassadors of the wonderful charity organization, imbued with a goal: to achieve and fulfill the goal they took upon themselves during the campaign, which began on Sunday night, and will end on Thursday at midnight.

You can also join the campaign on the website: https://raisethon.com/spch