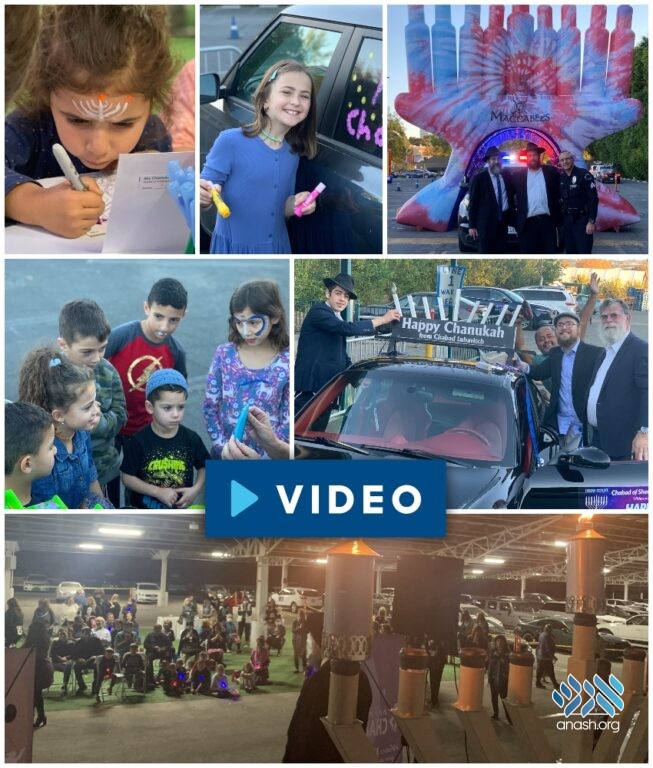 For the second year in a row, the community of Sherman Oaks got together for a Menorah parade and Public lighting. A huge inflatable Menorah tunnel was constructed, which all the cars passed through on their way out.

“Last year, Covid-19 forced the experience to be much less interactive”, said Rabbi Mendel Lipskier, who directed the parade. “So this year, we decided to take everything to a new level.”

As people lined up at Emek Hebrew Academy (which once again graciously allowed us the use of their property) each family received a welcome bag, including goodies, toys and special Chanukah scarves.

While the cars were outfitted with Menorahs and Chanukah magnets, the children played in the lot and enjoyed face painting and a moon bounce.

A huge inflatable Menorah tunnel was constructed, which all the cars passed through on their way out.

Thanks to the combined efforts of Rabbi Yosef Teitelbaum and the local LAPD, headed by Sergeant Krinsky, the parade went seamlessly as traffic was redirected, with many passersby applauding the publicity of the Chanukah miracle on the streets.

The parade concluded at the Westfield Fashion Square Mall, where a family event was set up on the rooftop parking lot, with delicious doughnuts and many types of arts ‘n crafts.

Rabbi Lipskier greeted the assembled crowd and thanked those who made the event possible. Sergeant Krinsky was honored with lighting the Shamash, while Mr. Itzick Weinstein made the Brachos and lit the first candle.

Maoz Tzur was followed by other popular Chanukah songs, and then the children enjoyed a light show. The Yeshiva Bochurim who had come for Mivtzoim, broke out into lively dancing, sweeping the crowd with them.

“People were so happy to be a part of the event”, said Rabbi Yossi Lipskier, director of the local Cteen and CYP chapter. “Parents and grandparents kept telling me how great it was to once again bring their children to a public Chanukah celebration.

“This year, we’re scheduled to serve a different demographic of the community each night. We hope our success tonight is followed by many more.”