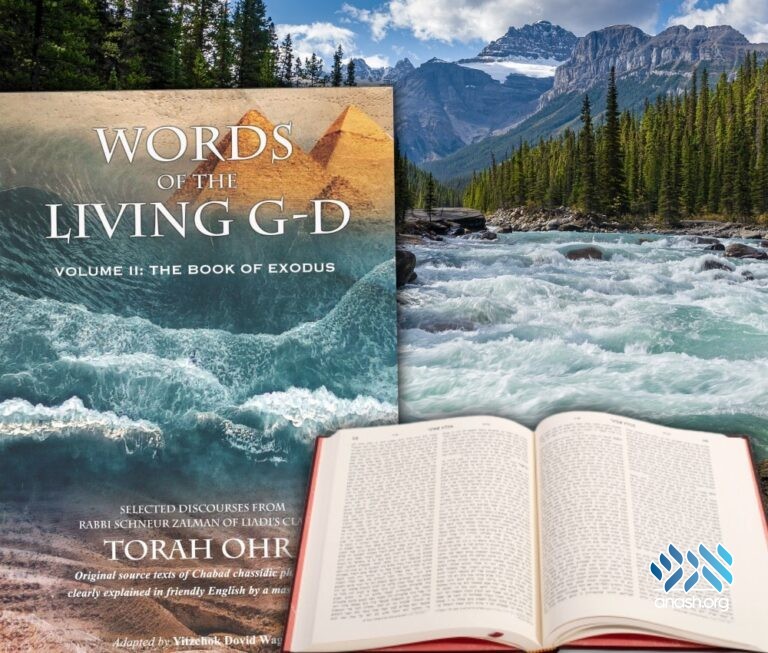 The long-awaited Shemos volume of the acclaimed Words of the Living G-d series—clearly explained adaptations into friendly English of the maamarim from the Alter Rebbe’s masterworks Torah Or and Likkutei Torah, is now available.

The long-awaited Shemos volume of the enthusiastically acclaimed Words of the Living G-d series—clearly explained adaptations into friendly English of the maamarim from the Alter Rebbe’s masterworks Torah Or and Likkutei Torah, is now available by subscription.

The style of this groundbreaking work is absolutely unique and has received acclaim from people all over the world. Rather than translating the discourses word for word, necessitating extensive footnotes and technical material—and resulting in a work still inaccessible to many—they have been conveyed in straightforward English as though one were reviewing them at a Shabbos table for guests without extensive background in Chassidus.

Explanations and background material have been seamlessly woven into the appropriate places within the text, making the profound and inspiring content unusually easy for even beginners to understand. At the same time, of course, the material itself remains true to the original discourses, and provides a faithful rendition even for those with more background who are studying them in English.

In honor of the occasion, the publishers have made available a free download of the chapter on this week’s parshah – Mishpatim.

Rabbi Yitzchok Wagshul, who adapted the discourses, smiles as he remembers a reader’s comment:

“I know a Jewish woman,” he says, “who grew up in the Soviet Union when religion was harshly suppressed. She told me when communism fell, she wanted to see what they’d been keeping from her—so (rachmana litzlan) she took up Christianity! Later she became disillusioned and turned into a hostile atheist.

“But eventually she read one of the previous volumes in the series. She approached me with a question. Here’s a woman who knows next to nothing about Judaism, certainly speaks no Hebrew, and has that background, yet she says to me, ‘Yitzchok, these concepts are so complicated: Sheviras HaKeilim, Beirur Nitzotzos….’

“Hearing terminology like that coming out of this person’s mouth, I just wanted to cry!”

Words of the Living G-d traces its roots back over 42 years, to when the author first began adapting the discourses for the benefit of college students. At the time, the Rebbe expressed his enthusiastic blessings, which are printed in the first volume. When the first 12 maamarim, on Sefer Bereishis, were published in book form in 2007, the series was endorsed as a major, groundbreaking contribution by giants of chassidic translation such as Rabbi Jacob Immanuel Schochet, Rabbi Zalman Posner and Rabbi Y. H. Greenberg. When the Vayikra volume appeared in 2014, another translation great, Rabbi Nissen Mangel, farbrenged in its honor. The project has been called the most important development in chassidic publishing since the translation of the Tanya in the 1960s.

“The…Tzemach Tzedek…remarked that the predictions of the coming of the Mashiach in the year 5608 (1848) alluded to the publication of Likkutei Torah,” wrote Rabbi Greenberg in his introduction to volume one. “However,” he continued, “the task of ‘drawing Chassidus down to earth’ can hardly be said to have been completed so long as its important texts remain inaccessible to those unable to study them in the original Hebrew. The adaptation of Torah Or and Likkutei Torah into clear and friendly English is therefore a monumental step, a major leap forward in the ‘dispersal of the wellsprings abroad.’”

In short, the Words of the Living G-d series authentically presents the original teachings of the Alter Rebbe in a manner accessible to the broadest range of modern English readers. It is suitable for readers with yeshivah backgrounds (it has even been used by bachurim to help them understand the Hebrew maamarim), as well as for newcomers to Chassidus—indeed, newcomers to Judaism itself. For this reason, Words of the Living G-d is ideal for Chassidus classes or weekly parshah study groups, as well as for baalei batim who wish to broaden their knowledge of maamarim or prepare some authentic Chassidus for the Shabbos table. As the dust jacket succinctly remarks, “If Rabbi Schneur Zalman were teaching today, this book is what he might well say.”

Because the printed book is still being typeset, the Shemos volume will be available by prepaying $36. plus shipping on www.PurityPress.org. The price includes weekly PDFs of the current parshah’s chapter until the physical book is ready. At that time, subscribers to the weekly PDFs will receive a copy shipped to them at no additional cost.

Also available in the Words of the Living G-d series are volumes one (on Bereishis), three (on Vayikra), and a Purim volume. And, as always, drafts of all six planned volumes are available free on the popular website LikkuteiTorah.com.

Purity Press will release volumes for Bamidbar, Devarim, and Holidays next. To do this, significant funding is needed, and opportunities are available for meaningful dedications. To discuss meriting to fund publication of the Alter Rebbe’s Torah Or and Likkutei Torah adapted into English, please email [email protected].