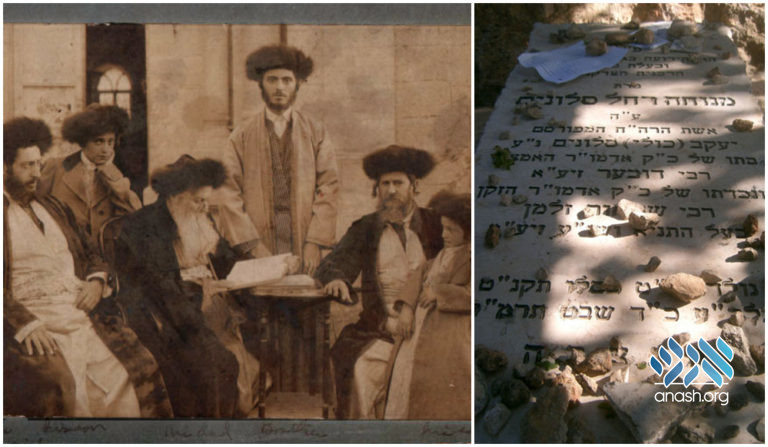 24 Shvat is the yahrtzeit of Rebbetzin Menucha Rochel Slonim, daughter of the Mitteler Rebbe and matriarch of the Slonim family.

Rebbetzin Menucha Rochel, the daughter of the Mitteler Rebbe, was born on Yud-Tes Kislev 5559/1798, on the actual day that the Alter Rebbe was freed from prison.

She married R. Yaakov Kuli Slonim and later moved to Chevron in Eretz Yisroel. She was a saintly woman to whom many mofsim are attributed, and many people came to her home to seek her blessing and advice. She passed away on the 24th of Shvat 5648/1888 and is buried in Chevron.

Rebbetzin Menucha Rochel was particular not to throw out any Shabbos food, and instead would offer it to her family members and guests. She attributed this practice to a tradition from the Alter Rebbe:

One Friday night a guest joined the Alter Rebbe’s seuda. When the soup was served, the guest took a spoonful but immediately stopped eating because of its saltiness. The Alter Rebbe was deep in dveikus, and when he came to, he asked the guest why he wasn’t eating. Before the guest had a chance to respond, the Alter Rebbe helped him by adding some salt to his bowl, and again fell into dveikus. This repeated itself several times.

Finally, the guest managed to tell the Alter Rebbe that the soup was too salty and inedible. The Alter Rebbe immediately took the soup, ate it up, and told the guest, “No Shabbos food is not good, or harmful to one’s health. One should not throw out Shabbos food!”

Rebbetzin Menucha Rochel attributed great importance to cleanliness and purity; the word “purity” was the word most often carried on her lips. There was never a stain seen on her clothing. Even in her later years, when she was quite old and bedridden, she maintained a pristine presence.

This was also the way she educated her children and descendants; whenever she met them she would bring this important virtue to the forefront of their minds.

She would say in the name of her father the Mitteler Rebbe and her grandfather the Alter Rebbe that “where there is cleanliness and purity, there is kashrus and Yiddishkeit.”

While preparing to travel to Eretz Yisroel, Rebbetzin Menucha Rochel went to the Tzemach Tzedek and expressed her fear of travel, since it was winter and she could fall sick from the rain. The Rebbe replied, “Worry not! You will travel between the raindrops!”

For the rest of her life, not a drop of rain fell on her.

There was a group of bandits in Chevron called “The Black Hand” who would break into Jewish homes, robbing and plundering, cursing and threatening all the while. They wreaked havoc until one day the group leader’s wife was having difficulty giving birth and both she and the baby where in grave danger.

Having no other choice, the chief bandit sent a message to the home of Rebbetzin Menucha Rochel pleading for a blessing. She returned with a message that if he would cease his wicked activities against the Yidden, everything would be alright. The goy swore that he would stop and hurried home, where he thankfully found out that his wife had given birth. The Yidden of Chevron were thus able to live without fear.