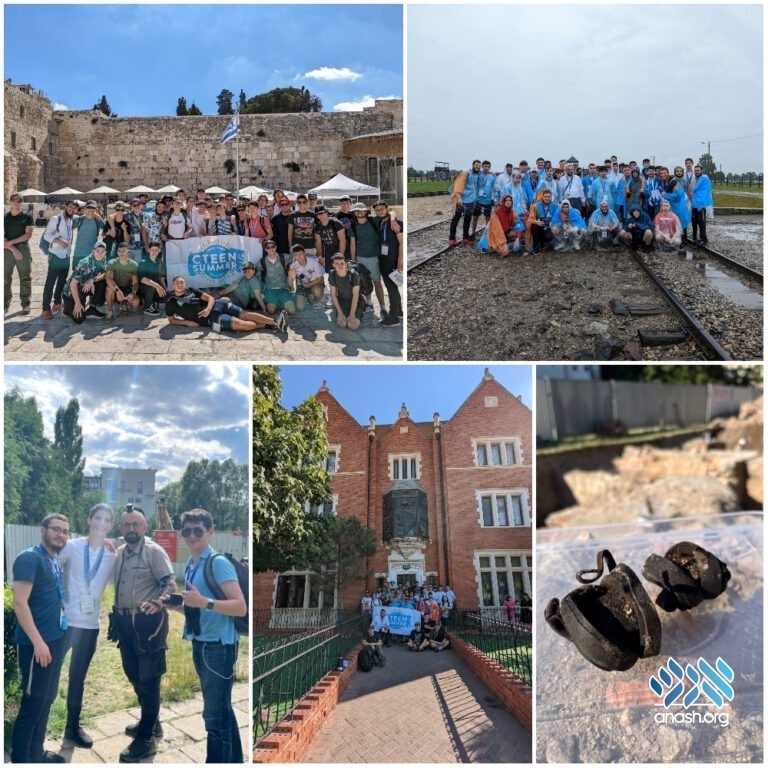 On a recent trip to Poland as part of the CTeen Heritage Quest programs, one of the teens puts on tefillin with another Jew for the first time where the Warsaw Ghetto once stood.

The aging home in front of them, nestled in the crowded Warsaw Ghetto, was brimming with tales, history, and lessons waiting to be told. The residence belonged to Mordechai Anilevich, a commander in the Warsaw Ghetto Uprising, and it was from the basement of this home that the sparks of the uprising were born. Over the years, the property has become a focal point of archaeological efforts in the area. Yakov Vinnik, 16, and his friends took in the surrounding scene.

The group of 30 teens was in Poland as part of one of the CTeen Heritage Quest programs, a 22-day adventure through Poland and Israel. A tour guide animatedly described to the teens the horrors and hardships the Jewish residents of the Ghetto endured throughout the war. The conversation progressed into the resilience and bravery displayed by those who fought the Nazis in the courageous uprising.

Born and raised in Chicago, Illinois, Vinik now lives with his family in Atlanta, Georgia, and is attending North Atlanta High School. He is a competitive ballroom dancer as well as an instructor in the same field. An active member of the local CTeen chapter, he was excited when offered the opportunity to join the trip and experience the history of his people firsthand.

While silently absorbing and reflecting on the somber history before him, Yakov overheard a tourist speaking nearby with a familiar accent. Being that his parents originate from the Former Soviet Union, Yakov grew up speaking Russian in his home. Noticing the stranger’s Russian accent, Yakov engaged him and struck up a conversation in their native tongue. In the midst of their discussion, Yakov learned that his new friend was, in fact, a fellow Jew!

Growing up, Yakov had become accustomed to observing young Rabbis on the streets of Chicago asking Jewish passersby to put on Tefillin. Later, on a class trip to Washington, DC, Yakov himself was approached by a young Rabbi and put on Tefillin just 200 feet from the White House. While he now lays Tefillin regularly, he had kept his Judaism private and personal. Yaakov had never before considered sharing his Judaism, let alone offering another Jew which he had never met, the opportunity to perform a mitzvah.

“I am not sure what took me over at that moment, but for the first time in my life, I asked a complete stranger if he would join me in putting on Teffilin,” described Vinik. “I felt a strong desire to connect and maintain my heritage. I felt a need to respect those who lived, studied, and were killed on this very site. What better way than to carry on the traditions that so many gave their lives to preserve in this very place?  The scenes and experiences filled me with pride and respect and I wanted to share the feeling with others.”

Pulling his Tefillin from his backpack, Vinik was assisted by Rabbis Levi Harlig and Mendel Backman, two of the staff accompanying the teens on the trip. Together, they gently wrapped the Tefillin on the visibly emotional man.

As they finished wrapping the Tefillin and saying the Shema prayer, a sign in the distance caught Vinik’s eye, which he brought to the group’s attention. “Displayed in front of an excavation tractor was a sign on the wall pronouncing  “We Build We Remember.” The bold message reverberated through me –  That was exactly what we were doing by putting on Tefillin. We are remembering our history by building back up what the Nazis tried to destroy!”

“This special moment truly encapsulated the energy of this trip,” explains Rabbi Levi Harlig, a CTeen Heritage Quest staff member. “We watched as the Jewish identity simmering in each of the teens heightened throughout the three-week journey. Experiencing our rich and storied history in an authentic and energetic Jewish environment really brought their Jewish pride to the forefront, even bringing them to share it with others.”

Under the vision of Rabbi Mendy Kotlarsky, Executive Director of Merkos 302, CTeen greatly expanded its summer programming for the 2022 season, growing from four programs in previous years,  to hosting 11 programs this year. The generosity of Rabbi Bentzi Lipsker with a special fund established under the Keren Meromim Foundation allowed many more teens to join the CTeen Summer experience. Many additional CTeens were enabled to join the trips by the RootOne initiative, which generously provides financial support for North American teens to travel to Israel during the summer. The variety of programs includes two trips on America’s west coast, a powerful Poland and Israel experience, and a three-week extended stay in Israel.

An unexpected discovery brought the story full circle. Just one week later, amid their journey through Israel, Vinik and his group received chilling news from their tour guide. The archaeological excavators had just uncovered an antique pair of Tellin amongst the ruins. The eerie timing of the historical discovery fueled the powerful feelings the teens had towards what had transpired even further.