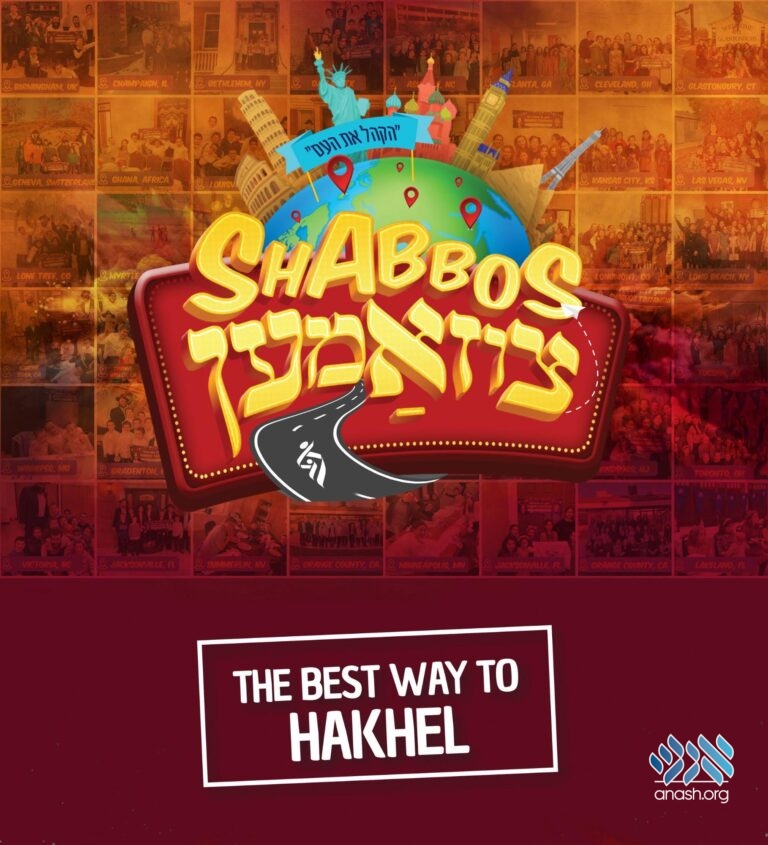 It wasn’t a given that Shabbos Tzuzamen would be happening again. But what started out as a one-time event to give all the Yaldei Hashluchim the Shabbos of a lifetime is here to stay.

It wasn’t a given that Shabbos Tzuzamen would be happening again. But what started out as a one-time event to give all the Yaldei Hashluchim the Shabbos of a lifetime is here to stay.

“Up until recently, we only had five or six Shabbaton locations worldwide, which excluded a lot of the Yaldei Hashluchim. Then last year, we wanted to empower each area to have their own,” shares Rabbi Mendy Shanowitz, director of MyShliach at Merkos 302. “But after seeing how much they appreciated being together for a Shabbos, it was a no-brainer to do it again this year… and to make it even bigger!”

It’s a Shabbos like no other. Geared for the Yaldei Hashluchim in 3rd to 7th grade, the Shabbatons are hosted by local Shluchim in tens of regions worldwide, giving them the priceless opportunity to spend an entire Shabbos with other Yaldei Hashluchim. “The fact that all these kids who are usually without friends on Shabbos now had tons of time with each other was incredible to see,” remarked Shlucha Nechamie Fajnland from Virginia.

The girls and boys joining the Shabbatons are treated to a first-class program with an awesome Shabbaton-in-a-box, epic merch, a packed schedule, exciting activities and a grand global Motzei Shabbos Hakhel event. And for the Shabbatons with over ten kids, two MyShliach staff members are provided to help.

“The Shabbaton was incredible from beginning to end!” enthused Mrs. Dvori Steiger, Shlucha to Park City, Utah, who was joined by a few families of Shluchim, some driving over six hours to spend the Shabbos together. “From the box we got in the mail full of things that were perfect for every age, to the bochurim that were sent, to the Motzei Shabbos Zoom event… It was so organized. There was such attention to every detail, and such quick answers to our questions. The boys had such a wonderful experience!”

But it’s not just fun and games. After a Shabbos of inspiration, the kids come away with an intense pride for being on Shlichus. “Our children had the most incredible experience and finished on a high, with a real appreciation for being a Shliach or Shlucha of the Rebbe!” said Mrs. Brocha Lent, Shlucha to Nottingham, UK.

For the host families, however, being able to watch the magic happen in their own homes took it up a level. As Mrs. Chaya Susman from Louisville, Kentucky, commented, “The experience for us as hosts was unbelievable. To see the boys, above all, just being together with other frum kids was amazing.”

What was unexpected, though, was how easy it was to host. “It was so simple to implement, and your staff was so receptive and accommodating!” shared Mrs. Beila Goodman, a Shlucha from Long Beach NY. It’s no wonder, then, that so many Shluchos want to do it again. “We and our children are very much looking forward to hosting another Shabbos Tzuzamen!” Mrs. Rochel Gordon from Tasmania, Australia, declared.

And in a Shnas Hakhel, with Shluchim all over having to suffice with joining grand Hakhel events virtually, how could there not be a Shabbos Tzuzamen? “This year, we have the goal to have 120 Shabbatons across the globe,” announced Rabbi Yossi Elberg, MyShliach Program Director. “It’s literally the best way to Hakhel!”

So what are you waiting for? Join the movement and sign up now at shabbostzuzamen.com!

For more information or sponsorship opportunities, click here to message Merkos 302 on Whatsapp.