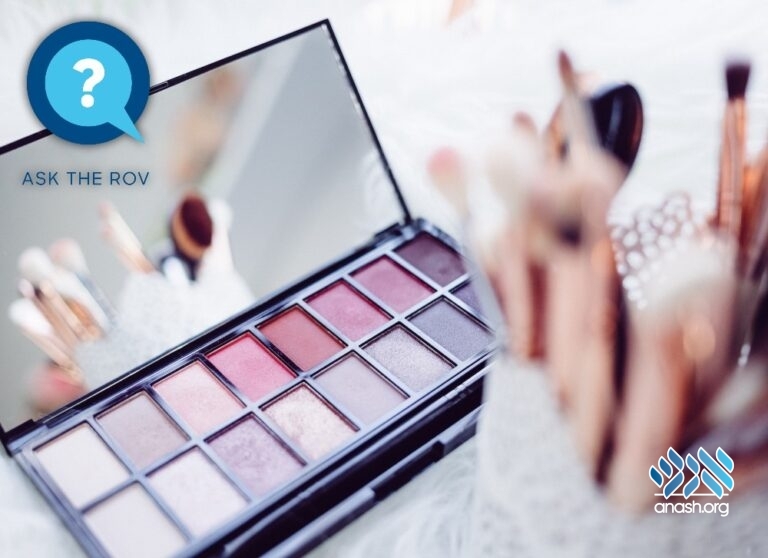 Ask the Rov: Is there a kind of makeup that may be applied on Shabbos?

The Mishna teaches us that kocheles (coloring one’s skin) is prohibited on Shabbos. According to the tanna R. Eliezer, one transgresses the melacha d’oraisa of tzoveia, coloring, while the Chachomim hold it is prohibited midrabanan. They hold that min haTorah the melacha of tzoveia doesn’t apply to coloring on the human body, either since it isn’t the normal manner of painting, or because it isn’t “lasting.”1 The majority of Rishonim rule like the Chachomim.2

Spreading cream or paste may also transgress the Torah prohibition of memarei’ach (smoothing).3 Because of these two issues, poskim rule that applying makeup on Shabbos is prohibited.4 Since they may not be applied, the makeup is classified as muktza on Shabbos.

Some contemporary authorities find leeway for applying pure powder without any oil- based additives, arguing that the powder does not color the skin, and it merely sits on the surface of the skin. It would be permissible only when applied to completely clean dry skin, but not if the skin is wet or has residue of previous makeup on it.5 One would need to use a designated brush that doesn’t have any cream or makeup on it (which can cause stickiness) and keep it separate from the brushes used during the week so that it isn’t a weekday activity. 6One must also avoid mixing colors which would be creating a new color.

Others, however, contend that any powder that sticks even somewhat to the skin is prohibited on Shabbos since the intent is to color the skin and that it should remain there for some time.7 A practical concern is that many of the so-called “Shabbos makeups” were tested and found to be lacking the halachic requirements.

The practice of frum women has traditionally been to abstain from applying makeup on Shabbos due to the shailos involved. In a particularly sensitive situation, there is room for leniency on a tested powder with a reliable hechsher following the above precautions.