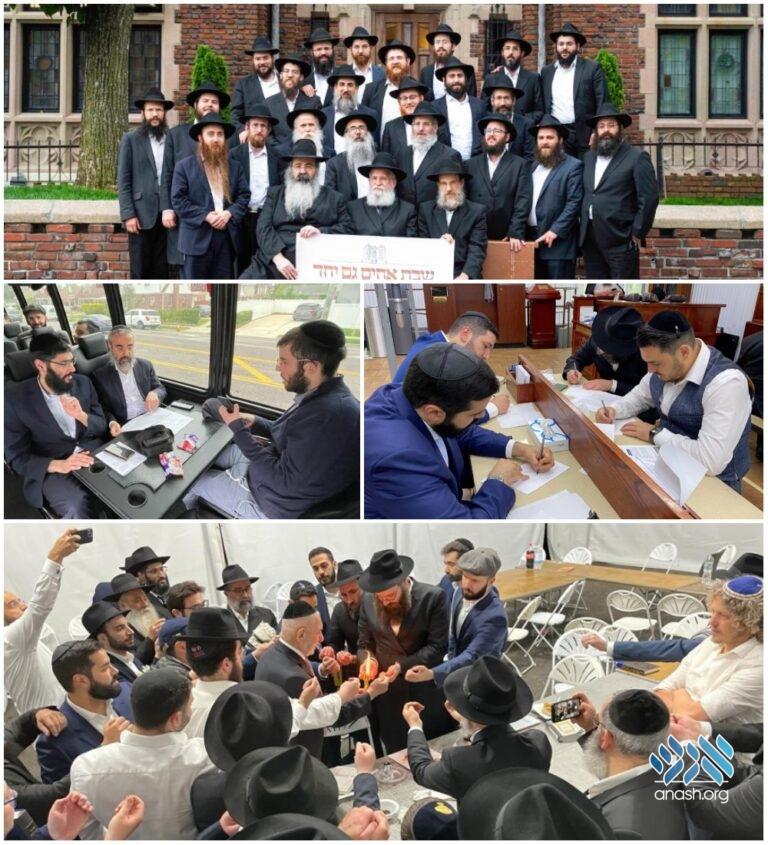 In preparation for Matan Torah, several large groups spent Shabbos at the Ohel, including the shluchim of Cholon, a large group of anash and mekurovim from Vienna and a group from France.

Shabbos Parshas Bechukosai was buzzing with activity at the Rebbe’s Ohel. In preparation for mattan Torah, the Ohel saw several large groups, including a Kinus Hashluchim of the shluchim of Cholon, a large group of anash and mekurovim from Vienna and a group from France.

Groups from Vienna have been doing this annually for six years, and two years ago, a women’s group formed as well. “When we started bringing groups, several people who hadn’t yet been blessed with children joined. Baruch Hashem, they had children soon after—one just nine months later,” says Rabbi David Neimark, a shliach in Vienna. “Since then, people have been clamoring to join these groups.”

The Vienna trip was formed with the guidance of Rabbi Jacob Biderman, the Head Shliach of Austria, and with the great help of Pinchas Gadilov who has been the driving force behind this group each year. The logistics of the entire Shabbos were arranged by Bentzi Sasson of Go Kosher Travel.

Ariel Faiziev, who joined the Viennese group, says it had a tremendous impact on him. “It was my first time at the Ohel. We learned so many new things about the Rebbe,” he says. “We were all together, we heard many stories about the Rebbe over Shabbos—who he was, what he did—we farbrenged, sang niggunim. It was very moving.”

Like Faiziev, Dani Tal of Cholon, a community member who accompanied the shluchim, was also deeply impacted. “This weekend turned me into a new man,” Tal said.

The Cholon group of 27 shluchim chose the Ohel as the place to gather for the Shabbos of their regional Kinus Hashluchim. The entire Shabbos was spent farbrenging, davening, saying Tehillim and learning Chassidus.

“This allowed us to fully focus on the ruchniyus,” said Sharon Chachamov, from the Viennese group. “Everything was coordinated well in advance; we lacked nothing.”

Arrange for your community to spend Shabbos at the Rebbe’s Ohel by visiting GroupsToOhel.com or click here for WhatsApp.

GroupsToOhel.com is a project of Or Vechom Hahiskashrus geared to aid groups in arranging visits to the Ohel.