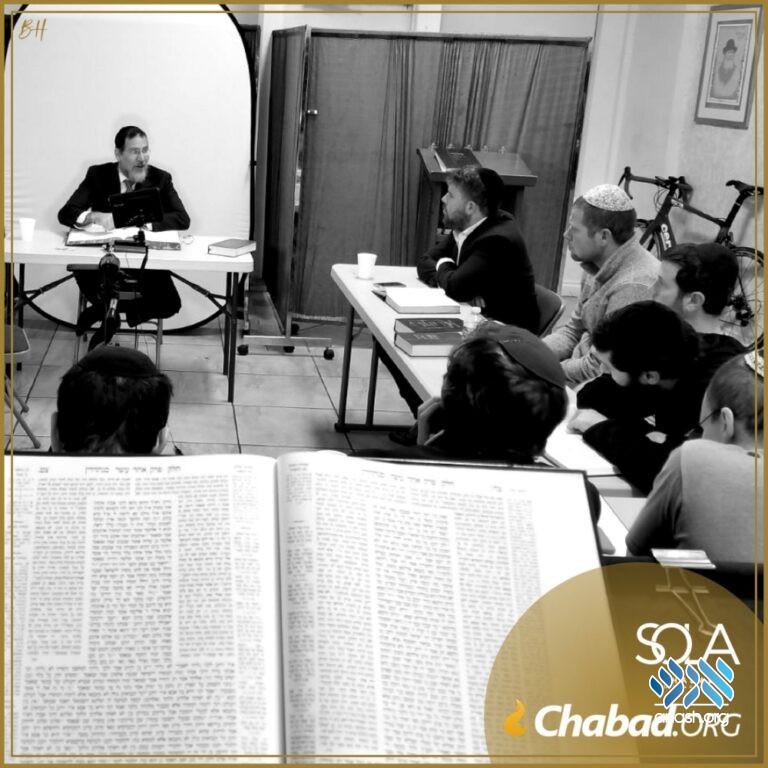 After nearly a decade of daily Gemara study, Chabad of SOLA and the broader Jewish community will soon be celebrating the online completion of the entire Talmud on Chabad.org.

Chabad of SOLA and the broader Jewish community are soon celebrating the online completion of the entire Talmud on Chabad.org.

Chabad of SOLA has stood as a lighthouse of Yiddishkeit ever since opening its doors fourteen years ago. From daily Minyanim and a wide range of adult weekly classes to Montessori preschool and youth events, Chabad of SOLA has become a home for many individuals searching for a warm and genuine community. Additionally, the SOLA community is in the process of developing the Eiden Project, a 21000 square foot center that will house men’s and women’s mikvahs, Chabad and Sefardic synagogues, a social hall and activity center to serve the greater Los Angeles Jewish community.

One of the first Shiurim hosted within its walls was a daily daf shiur, led by the dynamic Rabbi Avraham Zajac. Over time, Rabbi Zajac’s classes gained much local popularity for their clear and articulate style while seamlessly weaving into the daily learning other topics, such as Chassidus and Halacha. Besides for his clarity, Rabbi Zajac is known for his utmost dedication to his daily classes. Whether it be in an airport right before boarding a flight, doing a double daf early Sunday morning to compensate for Shabbos, or delivering a class in a different time zone in the middle of the night, Rabbi Zajac always ensured that his listeners learned Torah.

Approximately seven and a half years ago, as SOLA’s daf shiur was finishing Miseches Chagiga, Chabad.org reached out, asking if they could host the daily class on their platform, making it available on the world’s largest Jewish content website. For the past seven and a half years, Chabad of SOLA uploaded the daily daf onto the Chabad site, where hundreds of people benefit from it daily.

Participants from across the United States as well as internationally, avidly tune into SOLA’s live Gemara class, carving out time from their busy schedules to attend. On Sundays, people tune in for two hours to make up the Shabbos daf. They find that Rabbi Zajac’s classes are the easiest and most accessible way for them to learn Gemara, so they make it their priority to join.

Rabbi Zajac’s Gemara classes have served as a tool for many Talmud learners worldwide, for individuals looking for a way to enhance their daf yomi learning experience or those who want insight into a particular topic in Gemara. Most of his listeners never met Rabbi Zajac in person, yet he has become a familiar voice as their anchor in the sea of Talmud.

Currently, this seven-and-a-half-year feat is coming to a climax. On Wednesday March 9th, Chabad of SOLA, in conjunction with Chabad.org, will celebrate their online completion of the Talmud. SOLA and Rabbi Zajac will have made available for posterity the entire Talmud in a clear and straightforward fashion, for all to benefit from.

Chabad of SOLA invites all to join them in Los Angeles for a grand siyum, scheduled for March 9th at the lighthouse, 1026 S Robertson Blvd, Los Angeles, CA, 90035. Whether you have participated in the classes since inception, used them as a tool for a particular misechta, or benefited from their ideas and lessons in any other way, SOLA invites you to join them in person to celebrate this monumental milestone.

If you intend to join Chabad of SOLA on March 9th, RSVP at the following link:
https://www.paperlesspost.com/go/m7zoRAnCQyawq2S573bpD