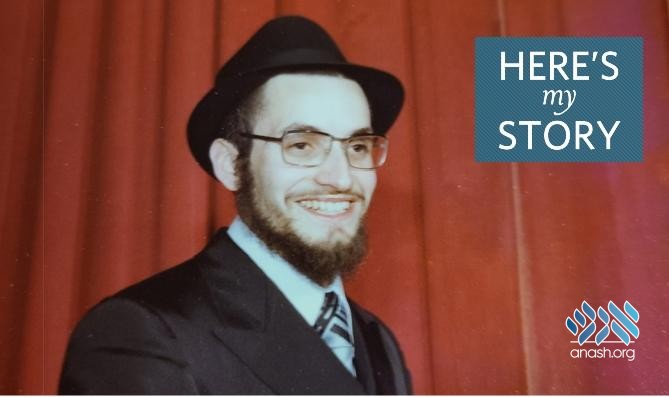 At the end of a private yechidus, Rabbi Tuvia Teldon asked the Rebbe what was the correct method of Teshuva. The Rebbe’s surprising answer is a lesson for all of us.

Since 1977, Rabbi Tuvia and Mrs. Chaya Teldon have served as the regional directors of Chabad Lubavitch of Long Island, which now includes thirty-eight Chabad Houses. Rabbi Teldon is also a member of the Central Board of Lubavitch Youth Organization, and the author of “Eight Paths of Purpose.” He was interviewed in the My Encounter studio in November of 2020.

As a child growing up on Staten Island, I had a Bar Mitzvah, but I couldn’t wait to leave Judaism behind. And I did. After attending college for two years, I decided to travel the world; I had the opportunity to visit many countries, including Israel, and I came to appreciate the richness of many different cultures. This exposure ignited in me the desire to explore what being a Jew really means, as I realized from my short time in Israel that I had no idea.

I started out by attending a couple of different Orthodox synagogues, because it seemed to me that I should begin by checking out the “original brand,” so to speak. But it was not until I came across classes run by Chabad in Kansas that I encountered something that seemed to offer a way of life where a meaningful relationship with G-d served as a motivation to make the world a better place. Curiosity led me to enroll in Chabad’s newly-opened yeshivah for beginners in Morristown, New Jersey. Within a month I decided to stay and, over the course of the next five years, I studied at the Chabad yeshivah in Miami, Florida, and at the central Chabad yeshivah in New York, where I eventually received my rabbinic ordination.

While studying in Morristown, I had the privilege of having my first personal audience with the Rebbe, on the occasion of my 21st birthday. This was in the spring of 1973. In advance of that audience, I did all the things an aspiring chasid is supposed to do before he meets his Rebbe — I prayed, I studied Torah, and I gave charity.

I vividly recall walking into the Rebbe’s office and putting on his desk the letter of requests that I had prepared in advance. Then I stood and waited nervously. The Rebbe seemed to read the letter intensely and then looked up at me and, in that instant, my nervousness disappeared. I instantly felt so calm and “at home” that I could direct my full attention to what the Rebbe was saying.

In my letter I had told the Rebbe that I had never been given a Hebrew name, but that my English name was a variation of my late grandmother’s name, Tova. “In that case,” the Rebbe said, “your Hebrew name should be Tuvia, which means ‘God is good.’” And then the Rebbe blessed me that I succeed in my studies. My learning progressed well and, with time, I was ready to date for marriage.

While I was dating Chaya, who would later become my wife, I hit a snag. She told me that she was unsure if she should continue seeing me. She was a mover-and-shaker type while I was a quiet student who was happy to sit and learn. Also, she would have preferred someone with a Lubavitch background, but I was clearly a newcomer. I dressed a little differently than the other students and I hardly spoke Yiddish.

When she wrote to the Rebbe about her dilemma, he answered, “Tishma ma shebefiv — Listen to what he has to say.” She understood this to mean that she should pay less attention to the externalities and really listen to me. She had to hear me out, and then decide if I was the person with whom she could spend the rest of her life.

When she told me what the Rebbe answered her, I realized that I had to be brutally honest with all of her questions. As a result, dating her proved to be a very powerful experience because I felt a tremendous responsibility to be totally transparent. I wanted to marry her very much, but I knew it was in G-d’s hands whether or not this was going to happen. Fortunately, it worked out well. We have been happily married for forty-four years.

Shortly before our wedding, we had an audience with the Rebbe as a couple, accompanied by our parents. After the Rebbe blessed us all, as well as our future children, I requested a few minutes with him alone, because I wanted to ask his guidance regarding a private issue.

I was a young baal teshuvah, one who had repented and returned to Judaism, but I wanted the Rebbe’s input to make sure I was doing it the right way. I thought the Rebbe may give me a specific assignment — such as “Memorize this chasidic discourse…” or “Recite this Psalm every day …” but I was open to whatever he would say.

His advice surprised me. The Rebbe said: “Help other people not to falter and transgress in the ways that you did.”

I heard it, I absorbed it and I remembered it. But, honestly speaking, it took me years to figure it out. I’ve thought about it a lot, and the reason I am sharing it here is because I think it is important advice. This was the Rebbe’s instruction to a baal teshuvah, but it could apply to many people in a variety of situations. The Rebbe wasn’t telling me to work on myself — which of course is important, but it was not what I needed to focus on at that time. He was telling me to help others improve and, by doing so, I would end up improving myself as well. If I could inspire another person to avoid going against the Torah by showing them how to come closer to G-d and how to bring more holiness into their home, I would be fulfilling my own mission in life. Rather than sitting and focusing on my mistakes, I should focus on helping others.

That was to be my task if I wanted to continue my teshuvah process. That was the call of the hour and, indeed, as I later understood, it was reflective of the Rebbe’s approach to so many issues in our generation.

We were married in 1977, the day after the Rebbe asked for volunteers who would be dispatched to Israel, so we applied to go. The Rebbe didn’t select us for that assignment, but one of those who was selected, whom I had never met before, asked me and my new wife to take over a monthly class he gave on Long Island.

We immediately agreed, and we also became involved in organizing a summer camp for the local kids and then in anti-missionary activity on the campus of Stony Brook University. All of that led to an official assignment for us, with the Rebbe’s blessings, to serve as the first Chabad emissaries to Long Island, where we have now been for forty-three years. Our hope and prayer is that by continuing to help our fellow Jews come closer to Torah we are doing our part to bring Mashiach closer.