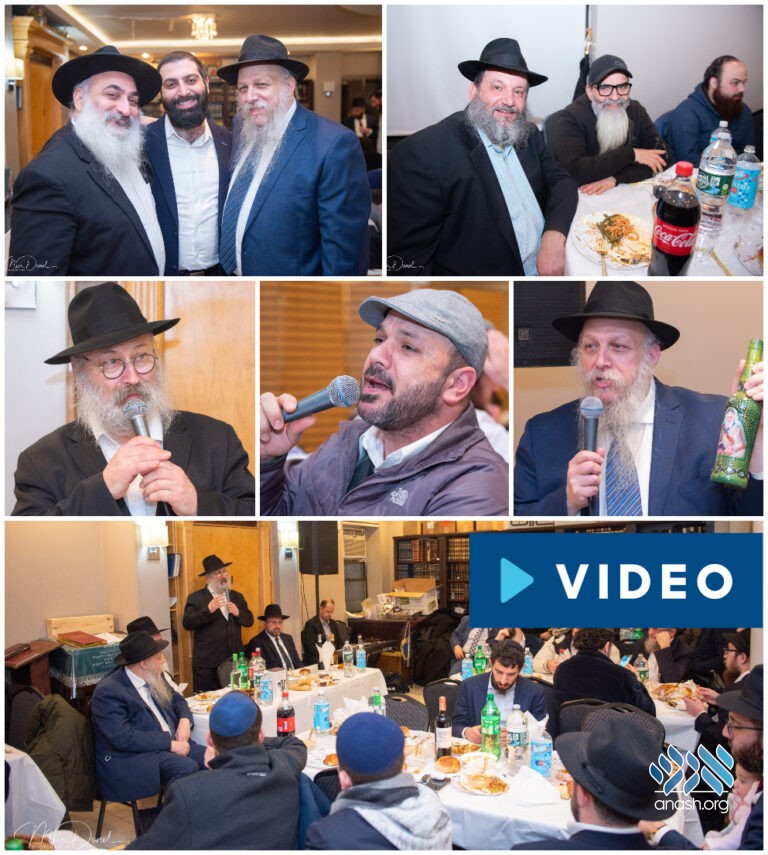 A grand Hiloula for the Sephardic community of Crown Heights marked the yahrzeit of the Rambam and Rabbi Yaacov Abuhatzeira, hosted by Merkaz Sfard in the shul’s new home.

A grand Hiloula for the Sephardic community of Crown Heights marked the yahrzeit of the Rambam and Rabbi Yaacov Abuhatzeira, the grandfather of Rabbi Yisroel Abuhatzeira also known as the Baba Sali.

In previous years, the Hiloula was hosted by Mrs. Chaya Zaetz , who is one of the two granddaughters of Baba Sali living in Crown Heights. Throughout the years, Mrs. Zaetz hosted a Hiloula for her great – great grandfather, Rabbi Yaacov, while her sister Mrs. Annette Lipsker would host the Hiloula two weeks later on 4 Shevat for their grandfather, the Baba Sali.

Due to the inability to host a private gathering this year, Mrs Zaetz reached out to Rabbi Lazer Avtzon, Rav of the Merkaz Sefard with a request to co-host the Hiloula.

Over 100 men and women came to the Beinoni Shul to celebrate the life of these two great Tzadikim. Incidentally, the Beinoni Shul was previously the residence of Rabbi & Mrs. Shlomo Matusof, from the first Shluchim sent out by the Rebbe, and head Shluchim to Morocco.

Bezras Hashem, it will also be the new home of the Merkaz Sefarad which currently occupies the adjacent apartment.

As such, the first guest speaker was Rabbi Eliyahu Matusof, son of Rabbi & Mrs. Shlomo Matusof, who offered words of greeting and Chizuk.

He was pleasantly surprised to be seated next to Rabbi Gad Bouskila, Chief Rabbi of the Moroccan community in New York and Rav of Cong. Netivot Yisroel in Flatbush.

As a young child growing up in Morocco, Eli would accompany his father every Shabbos afternoon to the Shul of Rabbi Dovid Bouskila where he would speak on the Parsha and Chassidut and Rabbi Bouskila would in turn translate his talk into French.

After davening, Rabbi Bouskila and his sons would accompany Rabbi Shlomo and his children home as they would continue to discuss Torah concepts.

Years later, when Rabbi Dovid Bouskila undertook to translate the Tanya into Arabic at the request of the late Rabbi Leibel Raskin, Rabbi Bouskila would review any difficult concepts with Rabbi Matusof.

Rabbi Eliyahu Matusof also spoke about his memories growing up in Morocco in the surrounding of so many holy Tzadikim. He also connected the Hiloula with Torah insights from Parshat Shemot.

The next speaker was Rabbi Michael Hassan of Monsey whose great grandfather was one of the chosen young men to receive Semicha from Rabbi Yaacov Abuhatzeira, one of the two Baalei Hiloula.

Rabbi Hassan offered insights from one of the 12 printed Seforim of the Baal Hiloula, known as Pituchei Chotam.

“The Hiloula always falls out in between the Parshiot of Vayechi or Shemot. The first Posuk has 11 words. ואלה שמות בני ישראל הבאים מצרימה את יעקב איש וביתו באו. The question is asked why the extra word of את and why the extra ה in מצרימה,” he said.

Rabbi Hassan explained how the ה represents the שכינה which went with them into Galus.

In his speech later, Rabbi Gad Bouskila related the story of the Petirah of Raabi Yaacov Abuhatzeira and how he came to be buried in Damanhur, Egypt as he lived in Morocco and was on his way to Eretz Yisroel.

He repeated in the name of the Baba Sali that the Egyptians initially did not want to release the Aron of Yaacov Avinu until they were given an assurance they would one day have another Tzadik with the same name of Yaacov.

In fact, the Baba Sali says that Damanhur is what was once Goshen where the Jewish people lived when in Egypt and this is why he was buried there and not in Cairo or Alexandria where there was a large Jewish community at the time of his Petirah.

Rabbi Bouskila also connected the evening with the upcoming Hiloula of the Alter Rebbe and Baal HaTanya and related how he spent Friday nights in his youth learning the Tanya as his father was then translating the Tanya.

Piyutim were sung until well past midnight accompanied by live music.

The evening was emceed by Rabbi Lazer Avtzon who also spoke about the same 11 words of the first Posuk of Shemos and that eleven is the numerical value of the initials of יעקב אבוחצירא. It is also the initials of the Chida, חיים יוסף אזולאי. The Chida passed away on 11 Adar 5567 (1807) and Rabbi Yaacov Abuhatzeira was born on that same day. ובא השמש וזרח השמש.

The meal was prepared in rich and traditional Moroccan custom by Rebbetzin Dr. Sarah Avtzon and Mrs Chaya Zaetz.

Throughout the night and all day participants shared how uplifting this Hiloula was with educational and inspiring Torah thoughts and being able to connect to all the three holy Tzadikim by learning their actual Torah.

To be included in future events by the Moroccan community in Crown Heights, you can join the WhatsApp group Crown Heights Hiloulot.