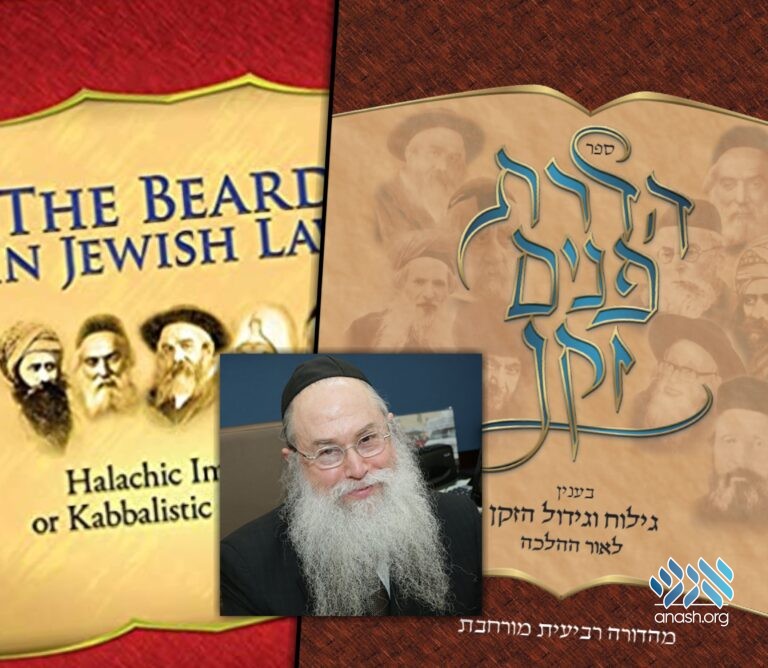 Sefer Hadras Ponim Zokon, an encyclopedic work regarding the cutting and growth of the beard in Halachic perspective, just publishes 500 pages of supplemental material in its own stand alone book.

Sefer Hadras Ponim Zokon, an encyclopedic work regarding the cutting and growth of the beard in Halachic perspective, by Rabbi Moshe Wiener, was already printed in 3 editions, each with new material not included in prior editions. [The Rebbe’s extensive involvement in the sefer’s publication, was recently covered by Anash.org.]

In keeping with a directive from the Rebbe, this volume is being published separately for those who already own the original sefer and wish to acquire the supplemental material without having to re-purchase the sefer.

This new volume of “Miluyim” (supplemental material) will eventually be included in the fourth edition of the sefer (1,222 pages), which is fully prepared to print once adequate funding is available.

Some highlights of the new volume include:

A recently published manuscript (authenticated by the Chidah) by one of the Ba’alei Tosefos which expressly states that cutting the beard with scissors is a Biblical prohibition and severe breach of halacha.

Chapters regarding whether beard growth is helpful or detrimental to Parnasa, Shidduchim and Sholom Bayis (including numerous citations from the Rebbe).

A chapter regarding management of a rolled beard on Shabbos.

Dramatic accounts about mesirus nefesh to maintain one’s beard during the Holocaust, in Communist Russian and in the early years in America.

Documentation of how the most prominent Roshei Yeshiva of various litvish yeshivos in Europe (such as Slabodka, Telz and Radin) reacted when their students began to cut their beards.

Excerpts from sichos and letters from the Frierdiker Rebbe about how to relate to Anash who cut their beard; that removing the beard is equivalent to removing the mezuzah from one’s home; the status of a Rov who cuts his beard; etc.

Guidance from the Rebbe on how to manage shidduchim, shalom bayis and parnasa issues relating to maintaining a full beard; whether it is appropriate to accept camp counselors who shave; whether to use a mohel who shaves; whether there is any validity to the argument that a beard brings one to “ga’avah,” etc.

Statements from the Chazon Ish strongly opposing trimming the beard for the sake of shidduchim or for kibud av v’em considerations or to help with “kiruv” activities.

Guidance from the Baba Sali regarding how to respond to sholom bayis issues relating to maintaining a full beard and concerning whether it is appropriate to roll-up a long beard.

How R’ Itche Der Masmid responded to bochurim from non-Chassidic yeshivos who cut their beards.

Quotations from the family and leading disciples of Rav Aharon Kotler regarding the prohibition of using an electric shaver.

Statements from the Frierdiker Rebbe, from the founder of the “Malachim” and from the Mirrer Rosh Yeshiva regarding the sacrilegious reasons behind why the bochurim in the litvish yeshivos of Europe before WWII began to shave.

An analysis of the position of Chabad concerning the length of Payos HaRosh.

Guidance from the Rebbe to Rav Avrohom Hecht about how to relate to shaving in this Sephardic congregation.

Additional sources regarding whether or not it is appropriate to comb the beard or place beard hairs in sefarim.

Astonishing revelations regarding how Rav Kook and the Chazon Ish responded to the 1929 massacre in Chevron.