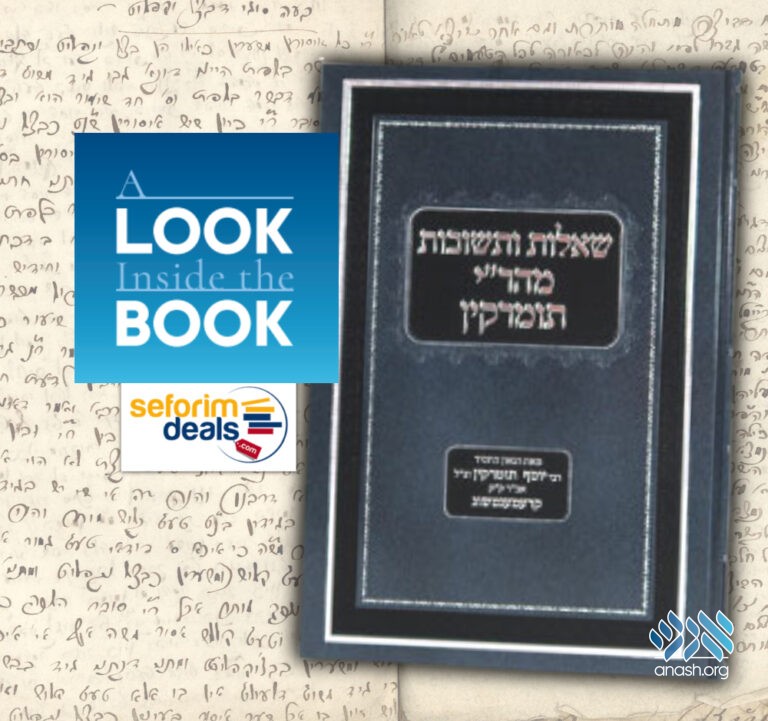 A Look Inside the Book: Harav Yosef Tumarkin, the Rov of Kremenchug, was a prominent Lubavitcher rov and posek who has been largely forgotten because most of his writings didn’t survive and reach print. The new sefer Shu”t Mahari Tumarkin, is an attempt to turn the wheel back.

A Look Inside the Book is an Anash.org feature that takes a look at what’s new on the shelves of Seforim stores, and reviews recently printed seforim and books. The feature is presented in collaboration with SeforimDeals.com

Chazal say “Everything needs mazel, even a sefer Torah in the heichal (aron kodesh)” (Zohar 3:134a, see the linked pages for details). Meaning, there are usually a number of sifrei Torah in an the aron kodesh, and an individual sefer Torah’s chances of getting taken out for use more or less often come down to mazel.

Rabbi Yosef Tumarkin (5579-5634), the Rov of Kremenchug, was one of those sifrei Torah that unfortunately didn’t have much mazel. A prominent Rov and renowned posek in his time, he has been largely forgotten because most of his writings didn’t survive and reach print. The new sefer Shu”t Mahari Tumarkin, published by Kehos, is an attempt to turn the wheel of fortune and grant this great Rov some of the recognition he deserves.

Our sefer is comprised of two main sections: biography and teshuvos. The two editors apparently split the work between them, with R. Levi Holtzman focusing on the biography and R. Menachem Mendel Nachshon on the teshuvos.

In this review, we will survey the contents of the sefer and then comment on some editorial decisions.

Shu”t Mahari Tumarkin opens with a lengthy 71 page biography of the mechaber R. Tumarkin. An earlier version of this introduction was published in Heichal Habaal Shem Tov 37, pp. 161-194, but the final version published here has been greatly expanded to include portraits of the mechaber’s illustrious brothers and children.

Here we read about the roots of the famous Tumarkin family in Dubrovna, White Russia, where R. Yosef was born and studied under the tutelage of the renowned R. Nechemiah of Dubrovna, the author of Divrei Nechemiah.

Already at a young age, R. Yosef was considered one of the most prominent Chabad Rabbonim, and a member of the select circle of Rabbonim whose opinions the Tzemach Tzedek solicited on some of the halachic questions sent to him. The Tzemach Tzedek’s high regard for R. Yosef is reflected in the fact that he sent him manuscripts of his teshuvos to review and comment on.

After the passing of the Tzemach Tzedek, R. Yosef played a key role in the Rebbe Maharash’s assumption of the nesius in Lubavitch.

In around 5617, R. Yosef was appointed as Rov of the Chabad community of Kremenchug, now in Ukraine. Kremenchug was a legendary chasidishe community, and the great ovdim and maskilim of the city are described here based on memoirs written by local residents.

After reading the story of our protagonist R. Yosef, we are then introduced to the other illustrious members of his family.

R. Don Tumarkin was R. Yosef’s brother, and was also a prominent chasid of the Rebbeim. A talmid chacham in nigleh and Chasidus, R. Don was also a successful businessman, and was appointed by the Tzemach Tzedek to serve as the head gabbai of Colel Chabad.

The third Tumarkin brother was R. Tzvi Hirsch, who was also the son-in-law of R. Yosef. After his brother’s passing, R. Tzvi Hirsch filled his position for a few years, before moving back to Dubrovna and passing the position on to the younger son-in-law, R. Yitzchak Yoel Rafalovitch.

A great talmid chacham, virtually nothing survives of R. Tzvi Hirsch’s chidushim. The introduction quotes a michtav brachah from R. Tzvi Hirsch published at the beginning of a small sefer titled Tiferes Bachurim. However, it should be noted that the author of this book was a notorious forger and none of the haskamos or letters of recommendation he presents can be assumed to be authentic (see Sefer Sofer Vesipur, p. 283, fn. 31).

After the founding of Tomchei Temimim in Lubavitch, R. Tzvi Hirsch was one a few Rabbonim that would visit occasionally to test the bochurim’s progress in learning and give semichah to those found worthy.

The introduction concludes with descriptions of R. Yosef’s sons and sons-in-law, the most prominent of whom was R. Yitzchak Yoel Rafalovitch, who filled his position in Kremenchug. A chasid of the Rebbe Maharash and the Rebbe Rashab, he was also a very successful businessman and a major askan in general Jewish affairs, serving as a loyal lieutenant of the Rebbe Rashab.

The editors have done an excellent job with the lengthy biographical introduction. They appear to have successfully located every available piece of information about R. Yosef Tumarkin and his immediate relatives, weaving together stories told by the Rebbeim and Chasidim with material from old, obscure newspapers to paint as complete and accurate a picture as possible of this great family. Regrettably, the editors’ good work is somewhat marred by the occasional typo and spelling mistake.

One element missing from the introduction is an analysis of R. Yosef’s method of learning and psak. While it is objectively difficult to write about this in detail based on the scant material available, some general points about his style and approach could certainly have been deduced.

As related in the biographical section, R. Yosef’s fame as a posek spread widely in his lifetime, and many of the Rabbonim of his time consulted with him on halachic matters. Eulogies published after his passing mention that his children possessed volumes of his teshuvos in manuscript form and were preparing them for print. Unfortunately, these teshuvos were never published and were eventually lost.

Shu”t Mahari Tumarkin contains only eleven surviving teshuvos that were preserved in the seforim of other authors or published from manuscript in the Yagdil Torah journal.

While none of the material here is new, the editors invested a lot of work in editing the teshuvos to make them more accessible. R. Yosef’s style is terse, referencing sources and leaving it to the reader to open them up in order to understand his arguments. Our editors do all of this work for us in the copious footnotes, providing all the necessary background information to understand the teshuvos, referencing other seforim that deal with the same topics, and adding further explanation when necessary.

For example, siman 1 contains a brief teshuvah by R. Yosef concerning mead, a honey-based alcoholic beverage prepared for Pesach that became the subject of significant controversy, due to the use of chametz barrels in its production.

The editors provide us with a general overview laying out the facts, the chronology of the controversy, and the various opinions, and then publish R. Yosef’s teshuvah along with five other teshuvos from other Rabbonim on the topic, all accompanied by detailed footnotes.

Most of the teshuvos concern niche topics, such as the intricacies of the proper spelling of names in gittin and hilchos mikvaos, and will primarily interest Rabbonim that deal with these issues. However, with the help of the footnotes, readers with a solid yeshivah education should be able to learn the teshuvos and understand them.

Unfortunately, the editors missed a teshuvah of the mechaber published in his teacher’s Divrei Nechemiah, Even Ha’ezer 7. Simanim 6-7 in Divrei Nechemiah include a three-way discussion between R. Nechemiah of Dubrovna, his son R. Levi Yitzchak, and his student R. Yosef Tumarkin, on the classic lomdishe sugyos of מקדש במלוה and טלי גיטך מעל גבי קרקע. This omission is particularly unfortunate considering the paucity of teshuvos available from R. Yosef.

Following the teshuvos, the editors present a collection of shemuos quoted in the name of the mechaber in other seforim. Of note here is a lengthy siman devoted to the question of how to spell the name “Yankel” in a get, a topic concerning which R. Yosef Tumarkin’s opinion has been quoted and hotly debated among poskim for generations.

The sefer concludes with the text of the various haskamos given by R. Yosef to other seforim. His haskamah to Divrei Nechemiah is notable for his beautiful poetic description of his teacher’s greatness.

The sefer is followed by mafteichos and photocopies of manuscripts. The mafteichos provided only cover the actual text of the mechaber’s teshuvos etc., unfortunately leaving out the lengthy biographical introduction and editors footnotes to the teshuvos.

As noted, Shu”t Mahari Tumarkin only contains 11 teshuvos from the mechaber, most of them very brief. The teshuvos section is only 127 pages long, and without all the related teshuvos by other Rabbonim and the lengthy footnotes would only comprise a few dozen pages.

The decision to title this sefer as Shu”t Mahari Tumarkin is therefore questionable. A title such as Sefer Zikaron Mahari Tumarkin would have better reflected the content of the sefer and would also have been more respectable for the mechaber.

R. Yochanan Gurary published similar style seforim in the past, combining the biographies and teshuvos of R. Eizel Homiler and R. Baruch Mordechai of Bobroisk, under the titles Toldos Yitzchak Eizik and Toldos Baruch Mordechai respectively, even though both of these books contained significantly more teshuvos than the present Shu”t Mahari Tumarkin.

The publication of this sefer is noteworthy, as it is the first time Kehos has published a sefer of she’eilos uteshuvos by one of the gedolei hachasidim. (Shu”t She’eiris Yehudah by the Alter Rebbe’s brother sits in a category of its own; and while Shu”t Avnei Chein containing teshuvos written by the Rabbonim of the illustrious Chein family appeared under the Kehos imprint in 5773, this sefer was independently edited and published.)

In summary, Shu”t Mahari Tumarkin is a very well-produced book combining biographical material and halachah. Students of Chabad history—and the many descendants of the broader Tumarkin family—will find the biographical introduction of great interest, and those interested in the specialized topics of the teshuvos will find them a pleasure to learn, thanks to the thorough editorial work.

It is hoped that Shu”t Mahari Tumarkin will be an auspicious beginning, to be followed by many more sifrei shu”t and halachah written by the gedolei hachasidim of past generations.

As an addendum, it is relevant to bring to the attention of the public a number of other unlucky sifrei Torah containing teshuvos by great Chabad Rabbonim, in the hope that someone will take the initiative to finally take them out of the vaults in which they languish.