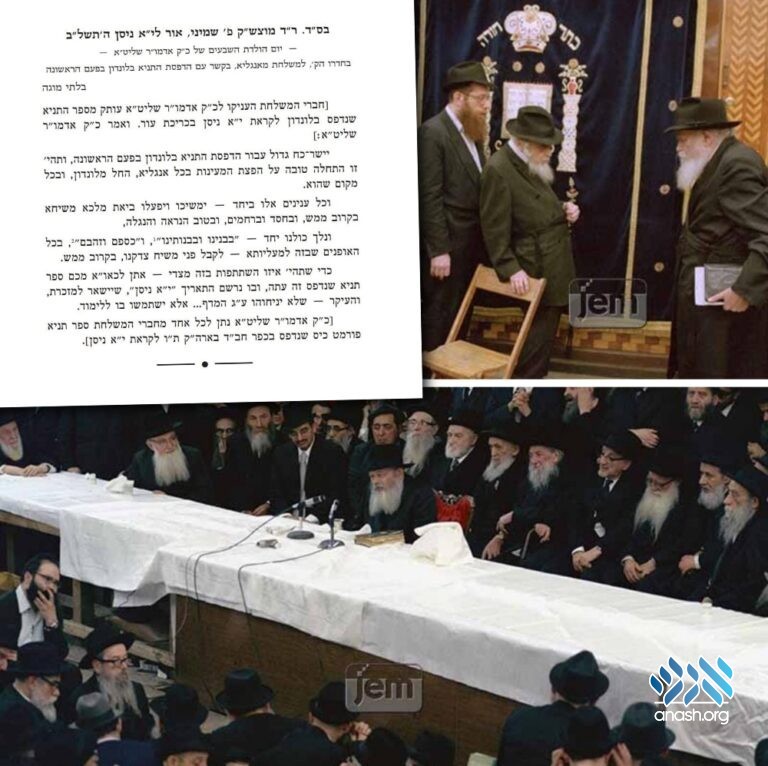 A secret recording of the Rebbe’s sicha on the eve of Yud Alef Nissan 5732 – the Rebbe’s seventieth birthday – was uncovered for the first time 50 years later, just days before the Rebbe’s 120th birthday.

The Rebbe’s 70th birthday was a historic time in 770. Delegations of Chassidim came from all over the world carrying special gifts on behalf of the Chassidim of their countries. Anash, Shluchim, bochurim, N’shei Chabad – all made unique preparations to bring the Rebbe a special nachas ruach in honor of his birthday.

During the historic farbrengen, the Rebbe asked that Chabad activities be brought to a whole new level, challenging Chassidim to open 71 new institutions during the coming year. It was in this same spirit that this year, with the approach of the Rebbe’s 120th birthday, more than 1210 new institutions have been established.

One link in the chain of events of those special days was missing. It was known that the Rebbe had received the delegation from England in his room, and had delivered a Sicha before them – but no transcript or recording was ever found, and the Sicha therefore never came into print.

In recent weeks, as part of the intense efforts of the team at Lahak Hanochos, headed by Rabbi Chaim Shaul Brook, in honor of the approaching Yud Alef Nissan, they managed to locate an old record in the archives of Rabbi Shalom Yisroel Chodakov, son of Rabbi Chaim Mordechai Aizik Chodakov, the head of the Rebbe’s secretariat. This record contained a recording of that missing Sicha.

According to the yomanim from that year, Rabbi Nachman Sudak, the Rebbe’s Shliach to England, waited in Gan Eden Hatachton that Friday (9 Nissan) to gift the Rebbe a copy of the Tanya that was printed especially in England, as a tribute to the Rebbe and in line with his request to print the Tanya in every location.

When the Rebbe entered, he received the elegantly-published, leather-bound volume with open satisfaction, and asked if there was another copy. When Rabbi Sudak answered in the affirmative, the Rebbe instructed him to present it on Yud Alef Nissan itself.

Rabbi Sudak understood that the Rebbe’s intention was that he present it during the farbrengen, as indeed, many gifts were brought to the Rebbe during the occasion. But on Shabbos morning, Rabbi Chodakov approached him and told him that he would be entering the Rebbe’s room on Motzaei Shabbos along with everyone involved in the printing. He replied that the printers did not come to New York, but those who had participated in the printing expenses were present; Rabbi Hadakov said that this was indeed the Rebbe’s intention.

On Motzaei Shabbos, the eve of Yud Alef Nissan, the entire delegation from England entered the Rebbe’s room, and were privileged to hear Sicha – which, as said, is now being revealed for the first time in fifty years (!), just several days before “Yovel 120.”

The reel was handed over to the professional staff at Jewish Education Media, headed by Rabbi Elkana Shmotkin, and they worked to improve the audio so that the Rebbe’s holy voice is more audible. Then, the team of manichim at Lahak, led by Rabbi Dovid Feldman, sat down to write the Hanacha for the first time since its delivery.

To listen to the Sicha on Ashreinu App: ashreinu.page.link/zWKe.

To learn the Sicha: