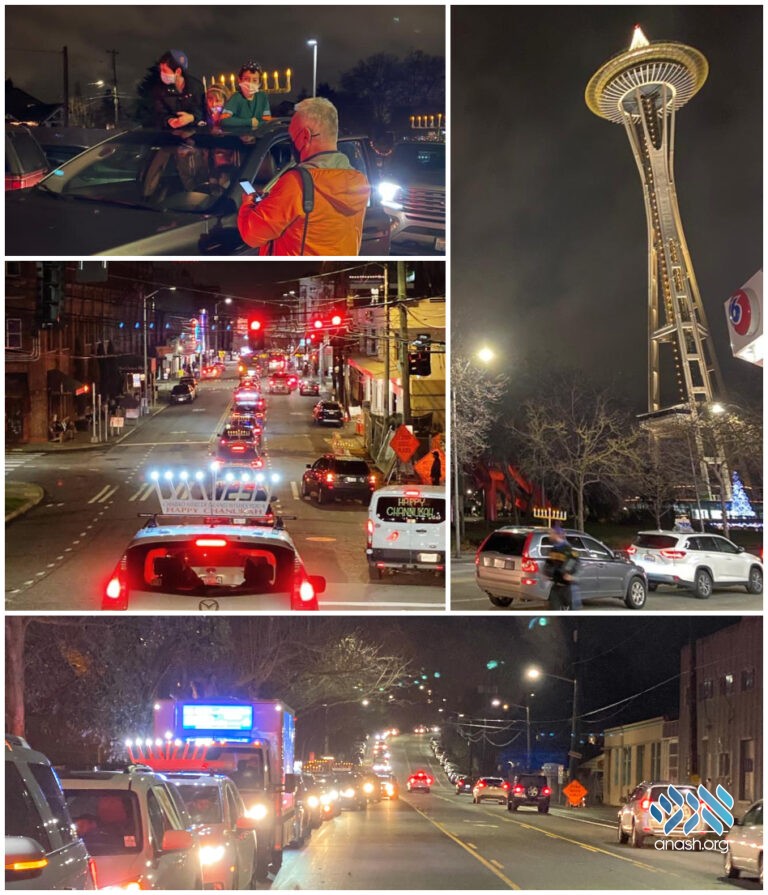 A menorah parade in Seattle, Washington, brought tears to the eyes of passersby who expressed their warm thanks to the organizers for bringing smiles and hope to so many people.

Cars and minivans quickly filled the parking lot of MMSC Day School, beginning to overflow into the nearby street on the soggy night of Tuesday, December 15th. MMSC students had been preparing for this night by personally planning and constructing many of the rooftop menorahs and decorations which crowned this long line of several dozen vehicles.

As gift bags for each family were passed out and the planned route was being texted around, a giant stuffed Rabbi mannequin was belted into the passenger seat of the security vehicle. Mrs. Chaya Elishevitz, the principal of MMSC, was tying up last minute loose ends, and Rabbi Shimon Emlen, who was responsible for leading the parade, sent out a final message signaling the departure from the school campus.

Our procession headed west in the Greenwood neighborhood, and then south towards Queen Anne. More cars joined by the mile, attracting smiles, and shouts of “Happy Chanukah” from pedestrians and other drivers. As we entered Queen Anne we were joined by a giant LED truck, led by Rabbi Shnai Levitin of Chabad of Queen Anne, with Chanukah graphics displayed on all sides.

I couldn’t help but notice several people on the street pulling out their phones to take videos while their jaws dropped another inch with each passing car.

As we entered the downtown area we stopped to make sure the more than 40 vehicles had all caught up. I took the opportunity to get out and take a few pictures of this beautiful sight of so many cars, and so much light and joy that we all shared in that moment. A car drove by and slowed down next to me as the window rolled down and the teary driver told me “thank you so much for being here, I’m so happy to see this!”

In downtown, we were now joined by Rabbi Weingarten, of Chabad of UW, in his truck with a 9-foot menorah propped up in the back. The energy was electrifying with all the stares, smiles and cheers coming from nearly everyone we passed. Of course, we had to stop for an iconic photo opportunity in front of the space needle. Rabbi Levi Levitin stood at the corner to greet, and cheer us on as we entered the Capitol Hill neighborhood, and finally came to a stop in North East Seattle at University Village.

“It was so beautiful to see our whole community come together,” said one of the participants. “Thank you so much for allowing me to be a part of your holiday,” said our security guard. “That was awesome!” said Avi, one of our participating students. I have to agree, it really was! I was so touched by the unity of our Jewish community from around the Seattle area.

The message of Chanukah is one of illuminating the darkness around us. Even in the dark times of oppression and struggle which have faced us throughout the millennia, the Jewish people never gave up hope. They knew that light would always push away the darkness. This too is a time of darkness and uncertainty for so many, and we all need a little light to brighten our lives and our futures. I’m so proud to have had a small part in this parade of joy and light, which brought smiles and hope to so many people! A special thank you to Avremi Gitler for being the inspiration for this year’s event!