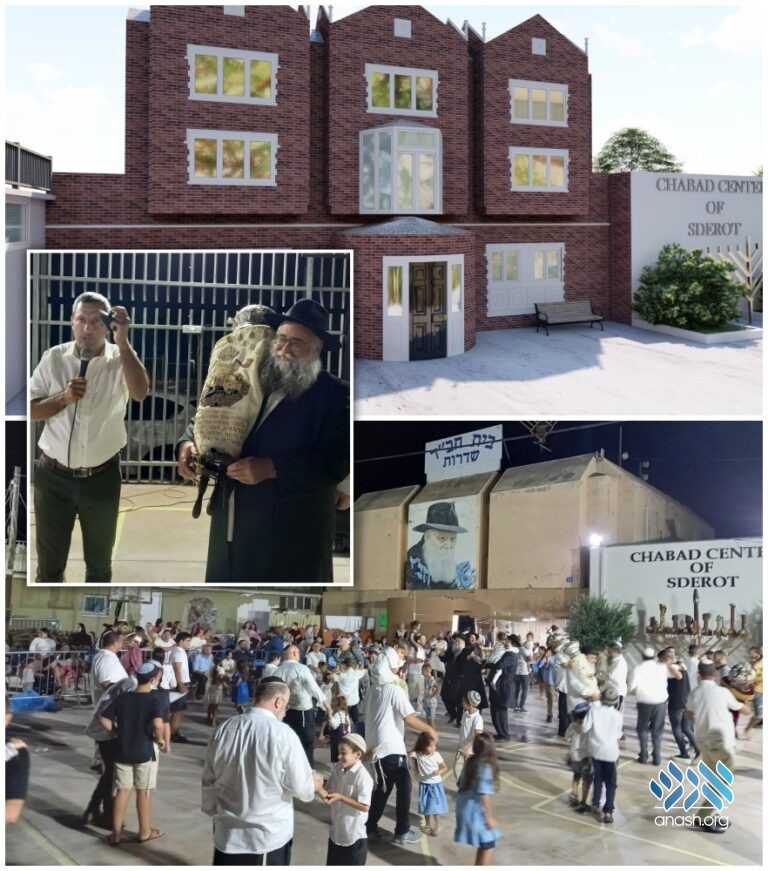 The large crowd gathered by the Chabad House of Sderot, Eretz Yisroel, for hakafos shnios, were pleasantly surprised when the mayor announced a new renovation that would turn the Chabad House into a replica of 770 in Crown Heights.

The large crowd gathered by the Chabad House of Sderot, Eretz Yisroel, for hakafos shnios, were pleasantly surprised by an announcement made by the city’s mayor.

Mayor Alon Davidi is a regular attendee at the Chabad House’s events, and makes a point to come every year to hakafos shnios, the customary “second hakafos” held on Motzei Yom Tov in Eretz Yisroel, where Shemini Atzeres and Simchas Torah are celebrated on one day.

During this years event, organized by Shliach Rabbi Moshe Ze’ev Pizam, the mayor made a surprise announcement, revealing that over the coming months, the Chabad House would undergo an extensive renovation, funded by the city.

But that was only the first part. The mayor then announced that the renovation would transform the Chabad House façade to make it look like 770 Eastern Parkway. After Kfar Chabad, Yerushalayim, Milan, Los Angeles, and over 35 locations worldwide, the “City of Qassams” will finally be getting a 770 of its own.

The new façade will replace the current one, which features a huge graffiti-style painting of the Rebbe. The work will begin as early as Cheshvan, and if the security situation allows it, it is estimated that it will be completed by Tevet.

Mayor Davidi praised the activities of the shluchim, headed by Rabbi Moshe-Ze’ev Pizam, and director of operations Rabbi Asher Pizam, saying that the Chabad House is “an integral part of in the city that is open to anyone.”

“770 will help turn the Chabad House into a tourist attraction in addition to the ‘Qassam Menorah’ at the entrance to the building that attracts a large crowd of tourists,” the mayor said.

Rabbi Pizam then related that when he brought up the 770 plan to the mayor, he thought he would need to put it a lot of effort to convince him.

“I thought I would have to work very hard, but the mayor was very enthusiastic and we thank him from the bottom of our hearts. The newly renovated Chabad House will be a beautiful home both physically and spiritually and I am sure it will help us expand our of our activities for the benefit of the residents and the many tourists,” he said.