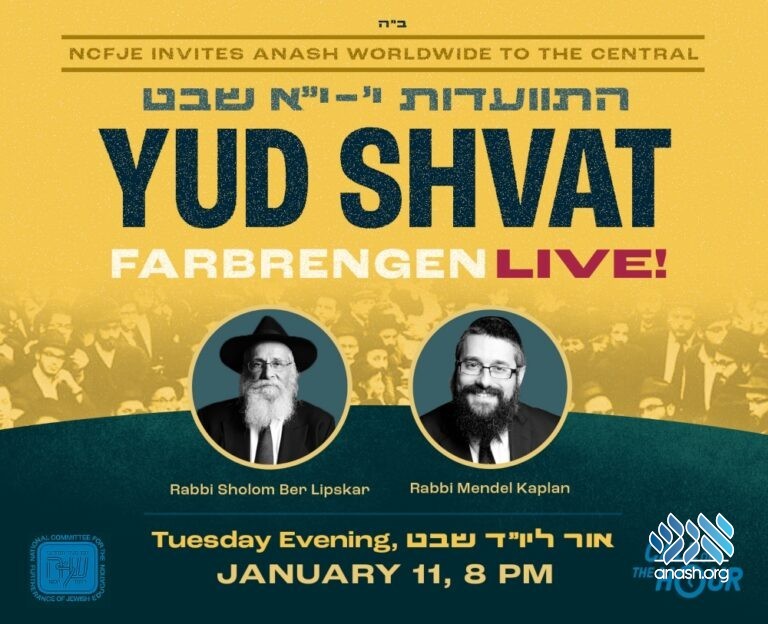 Yud Shvat is coming, and what better way to mark it than attending an international Farbrengen led by Rabbi Sholom Ber Lipskar and Rabbi Mendel Kaplan. A farbrengen that is sure to uplift and inspire – in the comfort of your own home!

On Yud Shvat we Farbreng.

With keynote addresses by Rabbi Sholom Ber Lipskar and Rabbi Mendel Kaplan, the Farbrengen will be filled with inspirational tales of our Rebbeim, the sharing of ideas, and an empowering evening of Hiskashrus and avodah.

On Yud Shvat we sing.

A feature of the Farbrengen will be soulful niggunim played by famed pianist Yaron Gershovsky. Viewers are invited to close their eyes and be swept away by the masterfully played melodies of our Rebbeim.

On Yud Shvat we join together to participate in the work of the Mosdos of the Frierdiker Rebbe and our Rebbe.

The farbrengen is hosted by NCFJE in support of Released Time’s fundraising campaign – The Call of the Hour.

This year for Yud Shvat, tune in to take part in a Farbrengen that will leave you uplifted, inspired and will strengthen your hiskashrus to our Rebbe.