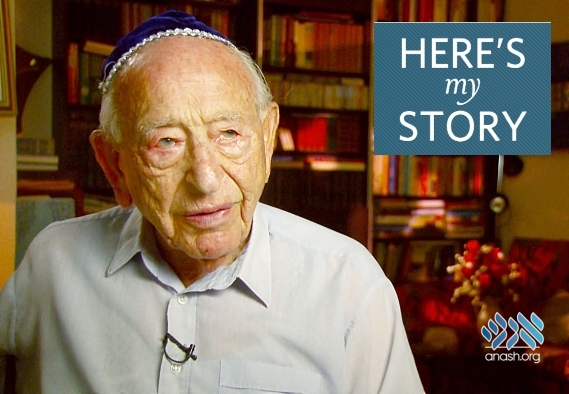 As the Eichmann Trial was underway in Israel, Former Prime Minister Moshe Sharett visited the Rebbe to discuss Holocaust remembrance. The Rebbe extolled the virtues of Holocaust remembrance but stressed the need for at least the same attitude towards strengthening Torah and mitzvot.

Mr. David Rivlin was a longtime Israeli diplomat who held various positions in the Israeli Foreign Ministry’s civil service. He was interviewed in his home in July of 2010.

I am a sixth-generation Jerusalemite: On my father’s side, I’m descended from the famous Lithuanian branch of the Rivlin family that emigrated to the Land of Israel together with a group of disciples of the Vilna Gaon in 1809. On my mother’s side I come from the Chabad branch of the same family; my great-great-grandfather, Rabbi Eliyahu Yosef Rivlin, was a pioneering member of the Chabad settlement in Chevron, which was founded a few years later, in 1821.

In my youth, before the founding of the State of Israel in 1948, I studied in Jerusalem’s Hebrew University, while also being drafted into the Jewish police brigade that operated under the British Mandate. My studies were, however, interrupted by the War of Independence, when I served as an officer in the IDF’s Communications Corps, and afterwards I traveled to England and completed my studies at the University of London.

In 1950, I was one of the founding members of the Galei Tzahal radio station founded on David Ben Gurion’s initiative, and from there I was invited to work for the Foreign Ministry, where I would go on to serve for thirty-four years.

While in the foreign service, I was sent for two postings to New York, the first as vice-consul from 1958-1962, and the second as consul-general from 1971-1975. Because my responsibilities included Soviet Jewish affairs, one of the first people I met in New York was the Rebbe; I knew how close this subject was to his heart.

Already in my first audience with him, the Rebbe surprised me by noting my family’s connection to the Rebbes of Chabad; one of the sons of Rabbi Eliyahu Yosef Rivlin married the daughter of Rabbi Dovber, the second leader of Lubavitch. It seems that he was well acquainted with the history of the Rivlin family, and knew about my mixed lineage of chasidim and their opponents – the mitnagdim.

“Tell me,” the Rebbe once asked, “when you come here today, do you come as a chasid or a mitnaged?

“When I come to you, I am a total chasid,” I answered instantly. I could see that the Rebbe appreciated my response.

The Rebbe knew that, as part of my job, I would frequently visit Jewish communities throughout the country for various appeals and lectures, such as on behalf of Soviet Jewry. This issue, in particular, was one he was deeply involved with and so he was very encouraging. He asked me to advocate and work on behalf of the Jews of Russia, and he continued to remain in touch with me during my next posting, as Consul General in Montreal.

While based in Montreal, I made an extended trip to the Soviet Union, visiting every major Jewish population center, from Moscow to Odessa. Before the trip, I asked the Rebbe whether I could tell the Jews I would meet that I knew him — he said I could, of course. He showered me with blessings, and asked me to bring back a “clear picture” of the Jewish people’s situation there.

Although the pressure on Soviet Jewry had slightly eased during the Khrushchev era, there were still two KGB agents who accompanied me wherever I went, which meant that none of the Jews I met could speak freely. Still, their amazement on hearing that I had brought with me real-life regards from the Lubavitcher Rebbe was hard to describe. They would ask to hold my hand, as tears flowed from their eyes, and I saw how their faces lit up upon hearing his name.

On my return, I was informed that the Rebbe’s secretary had called, inviting me to visit with the Rebbe. I gave the Rebbe a detailed report and I shared the deep impression that the Russian Jews left on me.

Eventually, I was posted to New York once again. Throughout that time, I would meet with the Rebbe frequently, oftentimes on his initiative, as he saw me as a source of information and as a point man. Members of the consulate had a tradition to visit the Rebbe’s court each year on Simchat Torah, but I would also come on other occasions, oftentimes accompanying Israeli political leaders or writers visiting New York. Most of them had heard from colleagues who had met the Rebbe and wanted to do the same. I would be in touch with the Rebbe’s office and set up an appointment for them.

Among the personages I brought to the Rebbe were Binyamin Eliav, the Consul General in New York, who ran some of the Israeli government’s secretive activities for Soviet Jews behind the Iron Curtain, and Eliyahu Eilat (Epstein), a Russian-born Orientalist who served as Israel’s first ambassador to the US. I also came along with President Zalman Shazar on more than one of his meetings with the Rebbe, although there were times he would, with apologies, ask that I leave him alone with the Rebbe.

One of the finest men ever to work for the Israeli civil service was Rabbi Dr. Yaakov Herzog, the younger brother of President Chaim Herzog, and a highly gifted scholar. He served as ambassador to the United States, as well as to Canada, where he became famous for a public debate he had with the British historian Arnold Toynbee on Israel.

On one visit to New York, he told me, “David, we have to go to the Rebbe,” so I joined him for a long audience that went nearly until morning. The conversation between them was profound and fascinating, covering a broad range of subjects, Torah and otherwise, including his recent debate with Toynbee.

It was interesting to see how the Rebbe always knew exactly who he was speaking to and he communicated with them in their own language. When he spoke with Avraham Krinitzi, the charismatic mayor and founder of Ramat Gan, rather than discussing Torah or Jewish history, he inquired about state-building efforts in Israel and the growth of his city in particular. “I heard that many well-to-do Iraqi Jews have settled there,” he said. “They no doubt will contribute to the city’s standing.”

One of the most prominent people I ever had the privilege of accompanying to the Rebbe was Moshe Sharett, the former Prime Minister. It was during the Eichmann Trial, and one of the things they discussed in their long conversation was the subject of Holocaust remembrance. The Rebbe emphasized the imperative of such initiatives, remarking that the memory of the Holocaust served as a “guide for our times, for the continued survival of the Jewish people.” However, referring to the painful disregard of Jewish tradition in parts of Israeli society, he added, “sanctifying the memory of the Holocaust is important, but there needs to be at least the same attitude towards what is holy in Judaism, towards strengthening Torah and mitzvot – the rock of our people.”

After we left, Sharett was immersed in his thoughts. “He is undoubtedly a very impressive person,” he remarked to me. “I need to think a lot about what he has told me.”

It was my great fortune to have been in such close contact with the Rebbe, a central figure in American Jewry with global influence, who had a deep concern for the Land of Israel and the people who live in it. It was no surprise that everyone wanted to meet the Rebbe. They were curious as to the secret of his influence, and wished to see for themselves what everyone was talking about: His blue eyes and radiant smile, his refined ways, the respect he showed all people, and the wise words he had to say.