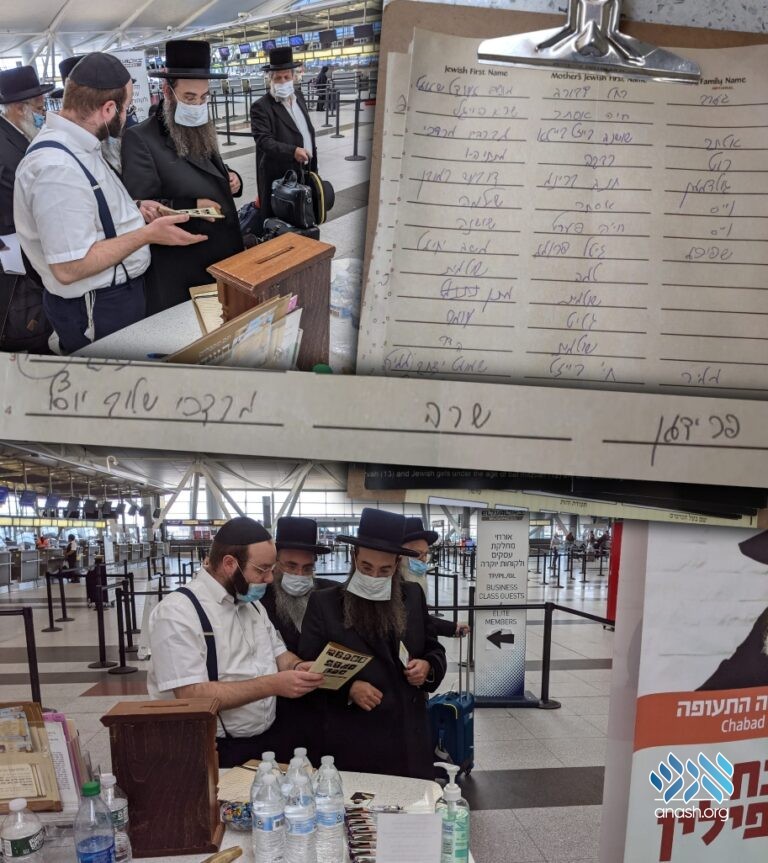 While passing through JFK on their way back to Eretz Yisroel, two distinguished guests stopped by the ChabadAir counter, where they praised their work and signed up for the Unity Sefer Torah being written by request of the Rebbe.

While passing through JFK airport on his way back to Eretz Yisroel, two distinguished guests made a short stop at the ChabadAir counter, headed by Rabbi Yossi Rap.

The counter gives travelers the chance to put on tefillin before boarding their flights, as well as offers light refreshments and drinks for them to say a bracha and refresh themselves.

On Tuesday, two distinguished guests stopped by the counter, and noted their admiration for the work of the bochurim and anash who man the booth every week without fail.

The first was Rabbi Avraham Mordechai Alter, the oldest son of the Gerrer Rebbe. Rabbi Alter was greeted by activists Shmuel Butler and Avremi Raichik, and spent a few minutes watching their outreach to the many travelers. Rabbi Alter told Shmuel a number of stories that had occurred with the Rebbe and his grandfather the Lev Simcha of Gur.

Rabbi Alter also signed up for the 9th Unity Sefer Torah, which is being written to fulfill the Rebbe’s request to unite all Yidden through Sifrei Torah.

Later that day, the Sadigura Rebbe of Yerushalayim also stopped by, on his way back to Eretz Yisroel after a visit to New York. Shmuel Butler showed him the work of the ChabadAir counter. Duly impressed, the Sadigura Rebbe praised their work, and encouraged them to continue their holy work.

At the encouragement of Butler, the Sadigura Rebbe also agreed to sign up for the Unity Torah, and gave over his name and mother’s name to be jotted down on the list.