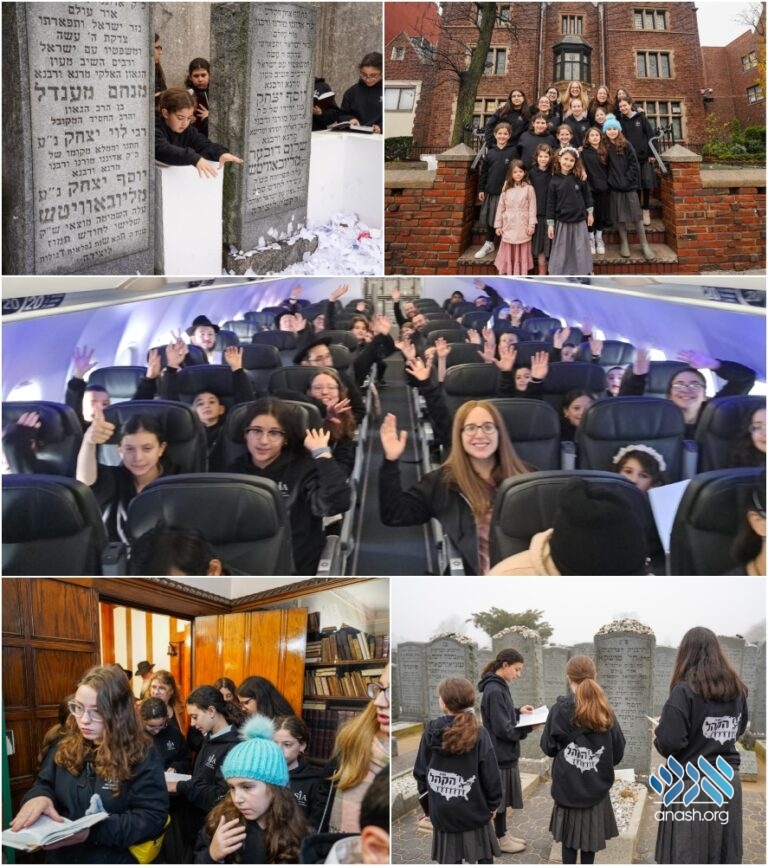 When discussing how Hakhel should be observed in their school this year, the staff of Sacramento Jewish Academy decided to do it in a way as similar as possible to the way it was done in the Beis Hamikdash.

It all began during a teachers meeting at the beginning of this school year at the Sacramento Jewish Academy. A discussion came up about what we can do as a school to properly observe Hakhel.

“Let’s look back at the roots of this Mitzvah. How was Hakhel observed in the times of the Beis Hamikdosh?” one teacher said. “It was about all the Yidden going to hear words of Torah from the king, and that experience enriched them with yiras shomayim to last for at least another 7 years.”

“If so, let us bring our school to the melech to enrich all of us with the same yiras shomayim as in the times of the Beis Hamikdosh,” he said.

Thus was born the idea of the Sacramento Jewish Academy Grand Hakhel Trip!

On Tuesday 12 Kislev, 47 men, women and children from the Sacramento Jewish Academy boarded a flight to come to the Rebbe for Hakhel.

Rabbi Yossi Korik, director of the Sacramento Jewish Academy shared: “Some of our students have never been to the Rebbe yet, and for the many of those who have been, it was as part of another reason, be it a family simcha, visiting relatives or even attending the kinus. The experience of getting on a plane and traveling across the country just to go to the Rebbe, is one that no doubt will have an everlasting impact on our students”.

Already one month before the trip, the students of Sacramento Jewish Academy prepared for this special Hakhel, through stories, farbrengens and learning. Each morning, the principal shared a thought related to the Hakhel trip. Age-appropriate hachana booklets were created for the children to learn about the Ohel and 770.

A song for the trip was composed by Mushka Heidingsfeld, a teacher at SJA, and several students recorded it at a studio. Excitement filled the air as the SJA Hakhel song was heard and sung during lunchtime and beyond. (The SJA Hakhel song is now available on Spotify: https://tinyurl.com/Sjahakhel) Countdowns were designed and hung up throughout the school. Each grade, along with their teachers, discussed the importance, meaning and specialty of this unique experience.

On Tuesday, Yud Beis Kislev, the group of 37 students along with 10 chaperones took off from SFO airport. Each child received a plane package with games, activities, stories and learning. After landing, they took a charter bus to Crown Heights, where they were graciously hosted for dinner by Reb Sholom and Esther Laine. As they enjoyed the meal, Rabbi Yanki Hecht shared a few words about the greatness of Hakhel. Guest speaker Rabbi Levi Goldstein shared stories and inspiration.

After dinner, the group walked to the Rebbe’s home on President Street for maariv. Following maariv, the Rebbe’s mazkir Rabbi Yehuda Krinsky spoke to the group, sharing special encounters he had with the Rebbe and Rebbetzin. The group was then given a tour of the Rebbe’s home. Afterward, they commuted to Queens, to sleep in a house next to the Ohel.

On Wednesday morning, Yud Gimmel Kislev, the group davened at the Ohel. Before writing Panim, Rabbi Chaim Zaklos spoke to the children, sharing stories and insights about the Ohel and writing to the Rebbe. After writing, and signing a Pan Kloli, they went into the Ohel. Students David Pickell and Didi Brownstein led everyone in reciting the Rebbe and Rebbetzin’s Kapitelach and then all sang Niggunim. Rabbi Mendy Cohen, dean of Sacramento Jewish Academy read the pan kloli. The group was then given time to read their personal letters and say Tehillim.

After breakfast, they drove back to Crown Heights and had the zchus to enter the Rebbe’s holy yechidus room, after an inspirational introduction by Rabbi Mendy Cohen, who shared a personal story he merited in yechidus with the Rebbe.

The afternoon schedule included tours of the Jewish Children’s museum, WLCC and the Rebbe’s library, followed by a pizza lunch and ice cream. During lunch, Rabbi Yoel Eidelman shared personal thoughts, empowering the children to recognize that even though they have never seen the Rebbe, the Rebbe sees them. “Knowing that the Rebbes sees us here gives us chizzuk and chayus to fulfill our shlichus,” he told them.

This kedusha-packed day culminated with an uplifting rally in the small zal of 770, led by Rabbi Shimmy Weinbaum from Tzivos Hashem, followed by mincha with Rebbe’s minyan, before heading to JFK for their return flight.

“The children, parents and teachers are all spiritually uplifted from this exceptional experience,” Rabbi Korik said. “Indeed this has been a most incredible way to celebrate Hakhel in our school this year.”