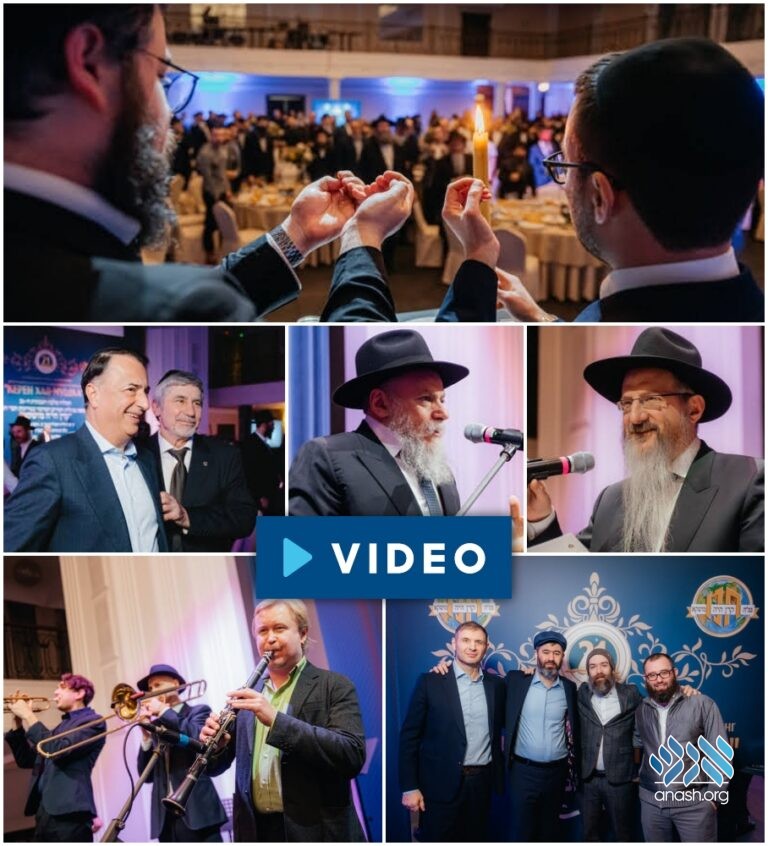 The annual melave malka for the Keren Chaya Mushka Gemach of Moscow, thanking donors and supporters, was hosted this year in the banquet hall of Sberbank, Russia’s largest bank.

It was an impressive event, as Rabbis, Shluchim, supporters and friends all sat down together to a festive Melava Malka in Moscow, Russia for the benefit of the local “Keren Chaya Mushka” Gmach.

What began twenty one years ago with just a handful of people and small scale assistance, has grown into the largest fund helping Rabbis, Shluchim, and families in need of assistance, throughout the FSU all year. Today it serves as a global beacon, a shining example of tzedakah and chesed given to others in a sensitive and dignified manner.

On Motzei Shabbos Parshas Tetzave, just a few days before the twenty fifth yahrzeit of Chaya Mushka Lazar a”h, daughter of yblcht”a Russia’s Chief Rabbi Berel Lazar, many guests gathered at the Sberbank Banquet Hall which Russia’s largest bank so generously agreed to open for the benefit of the Gmach’s Melava Malka.

The event began with Havdala recited by the Rabbi of the Anglo Jewish community in Moscow, Rabbi Yaakov HaLevi Klein, and continued with the reading of the Rebbe’s letter by board member Rabbi Dovid Mondshine, with the Russian translation read by philanthropist Mr. Chaim Nissan Bayer.

As in previous years, the main speaker was Chief Rabbi Lazar, who greeted the many guests and spoke about the greatness of the mitzva of Gemilus Chassadim. He listed the many different forms of assistance provided by the Gmach, especially during the last two years, while dealing with the pandemic. One after the other, supporters were called up to receive special gifts in recognition and appreciation of their ongoing support which enables the Gmach, along with their dedicated team of volunteers to individually care for each case seeking assistance.

One of the event’s highlights was when the guests filled out pledge cards and a raffle was drawn by the Shamash of the Marina Roscha shul, Reb Grisha Gerzhoy. The lucky winner was philanthropist Mr. Zalman Davidowitz, owner of a large group of clinics in Russia, and a true friend of the Gmach.

Birkas Hamazon was led by the director of Moscow’s Jewish communities Rabbi Mordechai Weisberg. It was late at night when the guests dispersed, each returning to their home inspired to continue growing the wonderful Chesed network that Moscow has merited.