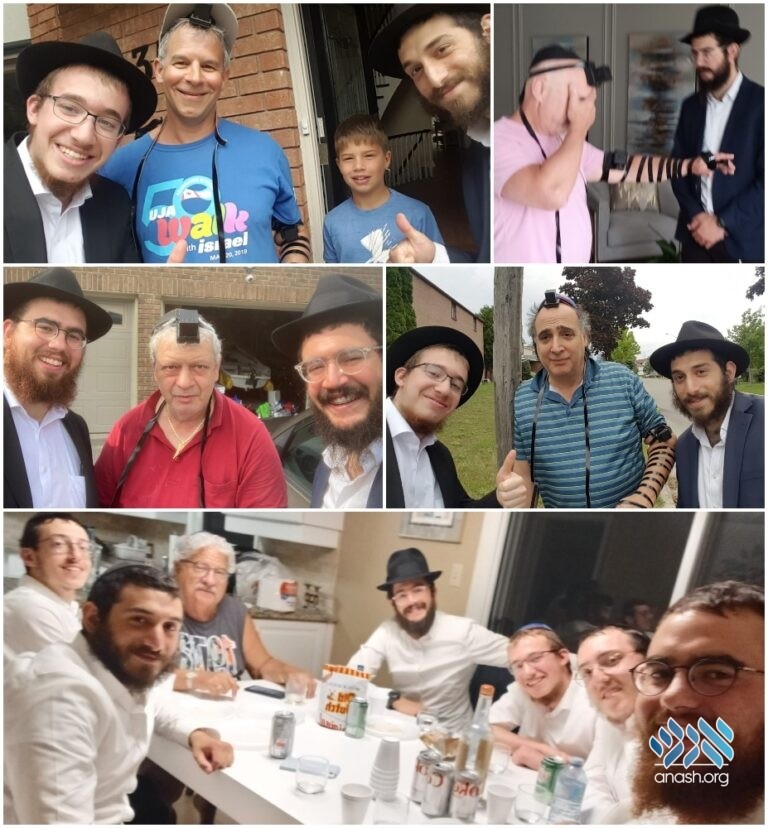 Six Merkos Shluchim managed to reach hundreds of previously-unknown Jewish families in Markham-Thornhill, and connect them to the nearby Chabad House and Jewish community center.

Last month in Markham, Thornhill, saw the launching of “No Jew will be left behind”, a bold new initiative to connect every Jew living in Markham to their Jewish roots.

A group of six young rabbinical students were handpicked from around the world and flown in to run this ambitious summer project The vibrant group of students Avrohom Brower, Avi Baitelman, Modshe Cunin. Mendel Ravnoy, and Berry Zirkind were led by Sholom Ber Plotkin, son of Rabbi Avraham E. and Rebbetzin Goldie Plotkin of the sponsoring local community- Chabad Lubavitch of Markham/Thornhill.

The students arrived on the shores of Toronto on August 3rd all pumped up and ready to take on this daunting but rewarding mission of reconnecting every Jewish soul back to their people. For a week straight the students mapped out the city, divided into three groups and began the work of knocking on every single door in the neighborhood.

The results were staggering. As a result of their non-stop efforts literally hundreds of new Jewish people were discovered living only a stone’s throw away from the Jewish community and Community center in Markham. Through the course of the week, hundreds of men were given a chance to put on Tefillin, women were encouraged to light Shabbos candles. Mezuzot were checked and beautiful brochures about our activities were distributed throughout the neighborhood.

The number of Jews found living near the synagogue and the potential for future growth was very heartwarming to the leaders of the community. According to Rabbi Plotkin, the rabbi and executive director of Chabad Markham “There is nothing as effective as the sheer enthusiasm and optimism that these young students brought to the community and the new connections that they made will transform our community for many years to come!”

This pioneering summer outreach program was then immediately followed up with the Rabbi and Rebbetzin visiting each of these homes over the next few weeks with freshly baked Challahs and a royal Erev Shabbos welcome, personally inviting them to the synagogue right beside them.

“We thank the students who made this happen, all the donors that made this project possible as well as the Chabad Central Summer Merkos Shlichus program,” Rabbi Plotkin said.

Rabbi Jonathan Sacks, the famous Chief Rabbi of the United Kingdom, once said about the philosophy of the Lubavitcher Rebbe that “if the Nazis searched out every Jew in hate, we will search out every Jew in Love!”

And this is exactly what was accomplished last month in Markham, Thornhill, with an abundance of unbridled, palpable love!