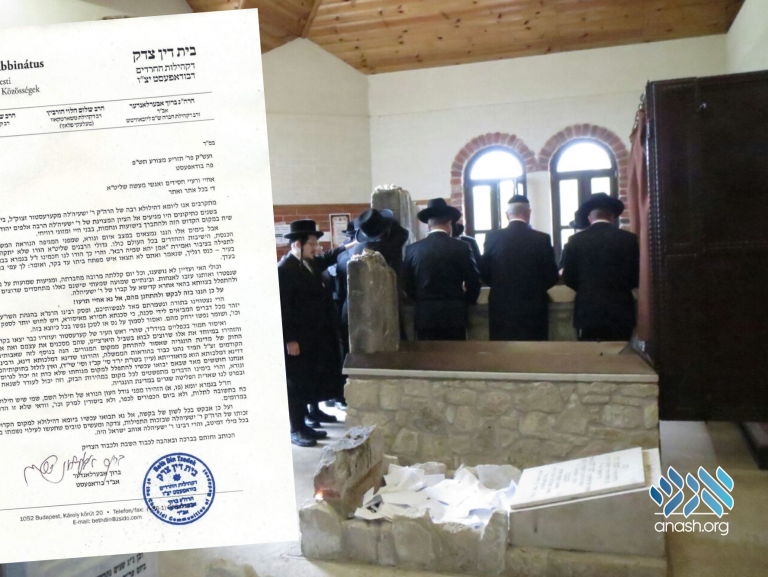 This year, with the dreaded virus still raging, Budapest rov and shliach, Rav Boruch Oberlander, has issued a plea to anybody considering visiting the gravesite of Reb Shaya of Kerestier not to come.

3 Iyar is the yahrtzeit of the tzaddik Reb Shaya of Kerestir, known lovingly as “Reb Shaye’le.” He passed away 95 years ago and was buried in Keresztur, Hungary.

Reb Shaya’le was a meshamesh at the court of Reb Tzvi Hirsh Of Liska. After his passing, he moved to Keresztur, where he became known as a tremendous miracle worker as well as a place where any hungry person can come and be served a delicious meal by the tzaddik himself.

In recent years, his gravesite has become a site where thousands gather on the yahrtzeit. Most Shabbosim also hosts large groups from all over the world. The hachnosas orchim there is second to none.

This year, with the dreaded virus still raging, shliach and rov of Budapest Rav Boruch Oberlander of Budapest has issued a plea to anybody considering visiting the gravesite not to come and thus avoid an international crisis and hurt relations with local and Hungarian officials. (See letter attached below.)

This, Rav Oberlander adds, is in addition to the fact that quite simply, gatherings such as these, even if allowed by the government, are still forbidden by the Torah commandment of VeNishmartem Meod L’Nafshoseichem.

Jewish magazines and newspapers have featured ads this week promising to deliver kvittlach (pidyonos) to the gravesite and that a minyan will daven for you there. Others have shown videos of printers stocked with thousands of sheets of blank paper waiting for you to send your kvittel and that it will be placed on the tziyun on the yahrtzeit.

Rav Oberlander told Anash.org that he had been contacted by Reb Shaye’les descendants that are in charge of the Hachnosas Orchim there requesting that he organizes one minyan and thus be the representative for the whole Jewish world. After speaking to local officials he had no choice but to decline the offer.

It is interesting to note that the only existing photograph of Reb Shaye’le was one that he needed to have made for a trip to Sanz on the yahrtzeit of the Divrei Chaim. Reb Shaye’le would travel there every year. After WWI, when the borders changed and Sanz was no longer part of the Austr-Hungarian empire, passports were required for travelers between Hungary and Poland.

Despite his objections, the government insisted that he have a photo attached to his passport. Reb Shaye’le agreed, but on the condition that he be allowed to wear his hat for the picture and that his complete face not be featured on the photo.

Surprisingly, his conditions were accepted.

Crown Heights residents and guests may remember the Kerestierer Mikvah on Eastern Parkway. It was run by his descendants, members of the Grosz family.