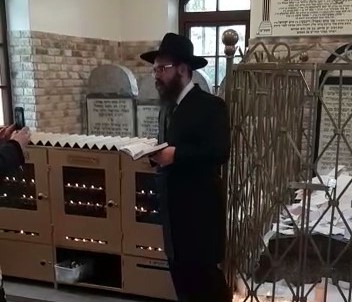 On a day when hundreds would normally visit the resting place of the Divrei Chaim of Sanz, shliach Rabbi Eliezer Gurary of Krakow made sure that at least their requests would be read there.

Sanz is now devoid of visitors.

25 Nissan is the yahrtzeit of saintly Reb Chaim of Sanz, author of the responsa Divrei Chaim, who is interred in Sanz – Nowy Sacz in Polish – in Galicia, Poland. A talmid of Reb Naftoli Horowitz of Ropshitz, thousands traveled to him during his lifetime, including many rabbonim. Many of the Hungarian rebbes were his talmidim and Chassidim.

Some of the Chassidic groups that are descended from him are Bobov and Sanz-Klausenberg. His two most famous sons were Rav Yechezkel of Shineve and Rav Boruch of Gorlitz.

His resting place is a major destination for those traveling to Kivrei Tzaddikim in Europe, and many hundreds would be there on this day. Until the coronavirus showed up and shut down all international travel and local restrictions forbade all large gatherings.

Today it was empty, save for shliach Rabbi Eliezer Gurary of Krakow, Reb Chaim Yankel Silberberg, a mashgiach kashrus in Poland, and some friends. Many people had been in touch with him to read pidyonos at the tziyun, and Rabbi Gurary obliged.