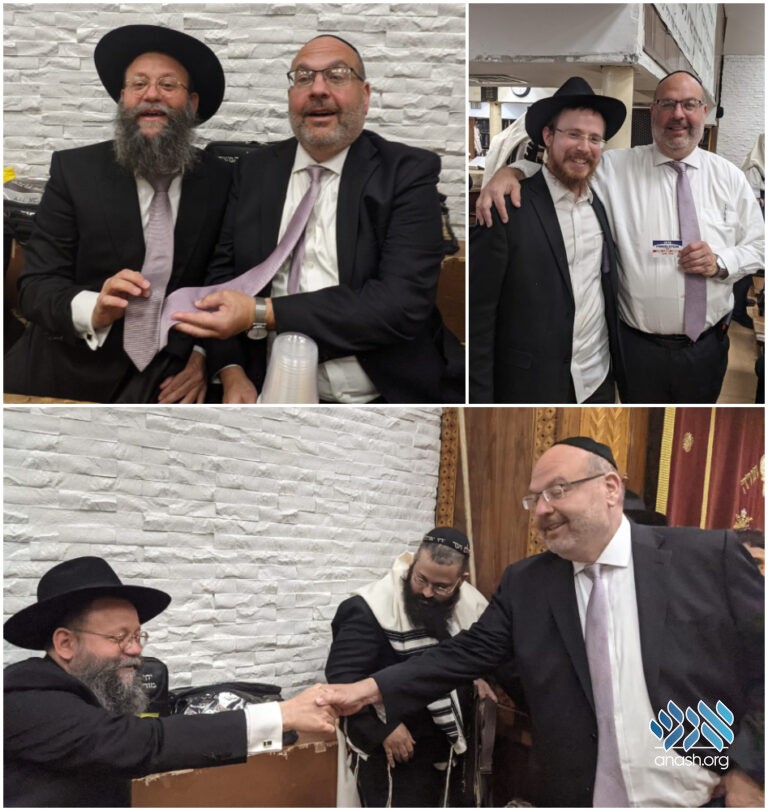 A rov and a civil court candidate shared a light moment over matching ties in 770 Eastern Parkway today after bumping into each other while on their respective visits.

The rov was Chief Rabbi of Lod Rabbi Shimon Meir Bitton, a Lubavitcher chossid who served as the Shliach and Rov of the Ganei Yaar neighborhood in Lod before being elected as Chief Rabbi earlier this year.

Rabbi Bitton was visiting 770 for his son’s bar mitzvah, and following shacharis, they sat down for a l’chaim and recital of the ma’amar traditionally recited by bar mitzvahs.

Joining them at the table was Charles Finkelstein, a candidate for Civil Court Judge of Municipal Civil Court District 5 (Kings County).

A graduate of Yeshiva Toras Emes, Yeshiva University and Pace University School of Law, Finkelstein has been practicing law for over two decades and is running in the Democratic primaries which will be held on June 22nd.

The rov and candidate said l’chaim together and shared some words of Torah. A humorous moment was when a bystander pointed out that they were wearing matching ties, and the two posed for a picture holding them.

Following his stop by the bar mitzvah celebration, Finkelstein continued his campaign stop in 770, introducing himself and handing out business cards to bochurim and locals.