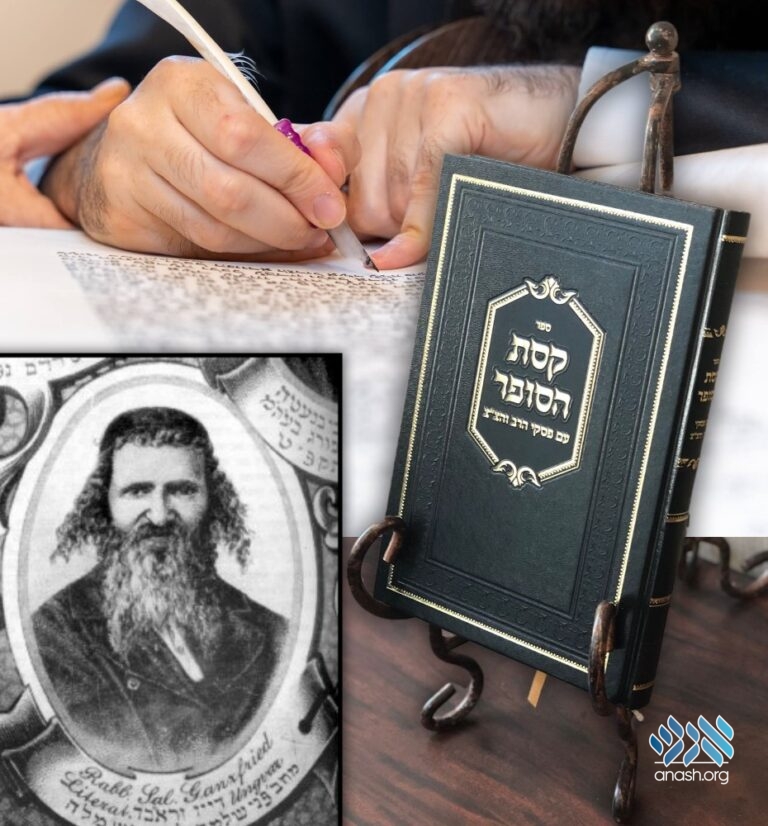 Rabbi Menachem Kahn, one of the youngest roshei kollel in Lubavitch today, published a new edition of a sefer written by the author of the Kitzur Shulchan Aruch together with a complete compilation of the pesokim of the Chabad Rebbeim.

Rabbi Menachem Kahn, one of the youngest roshei kollel in Lubavitch today, published a new edition of a sefer written by the author of the Kitzur Shulchan Aruch together with a complete compilation of the pesokim of the Chabad Rebbeim.

Often described as a complete encyclopedia of all things safrus related, ‘Keses Hasofer’ was authored by Rabbi Shlomo Ganzfried, whose other works include the famed Kitzur Shulchan Aruch. The sefer, his first work, is considered a staple for any sofer, and was highly recommended by gedolei yisroel such as the Chasam Sofer.

Beyond being a handbook for sofrim, the sefer also offers much practical information that the regular layman will find useful. For Chabad chassidim, and especially shluchim, whose tefillin are more heavily used due to mivtzoim, the sefer can prove as a valuable resource for knowing relevant halachos.

A new edition of the sefer, which just arrived from the printers, includes a complete compilation of the pesokim of the Rebbeim from the Alter Rebbe through the Rebbe, as well as the Maharil – the Alter Rebbe’s brother, the Divrei Nechamiya, Reb Avrohom Dovid Lavut – the Rebbe’s great grandfather and author of Kav Noki, and Shaar HaKollel, as well as the greats amongst the chassidim from previous generations such as Reb Aharon Strasheler, Reb Aizik Homler and others. Furthermore, many achronim that discusses the Alter rebbe and Tzemach Tzedek are referenced in the sefer as well.

The new edition was compiled by Rabbi Menachem Mendel Kahn, Rosh Kollel in the Kollel Mayan Chai of Flatbush, which operates under the auspices of the Mayan Yisroel center run by Rabbi and Rebetzen Yoseph Yitzchok Vigler. The sefer has haskomos from the leading rabbonim in the field of Safrus in Eretz Yisroel and America, including Harav Avrohom Osdoba of Crown Heights, as well as a glowing haskama and a lengthy introduction by the author’s father Harav Levi Yitzchok Kahn, Dayan of the Lubavitcher community of France.

“It is well known that the Rebbe pushed that bochurim should receive semicha before getting married, regardless if they are intending to become rabbonim. The Rebbe explained in the sicha of Chof Daled Teves 5712, that the reason for the push was so that every person could be a “rov in his own home.” Likewise, this sefer will help even those who have no plan to become sofrim, by allowing them to have the knowledge they need to keep their tefillin and mezuzos kosher, and other relevant halachos,” Rabbi Kahn said.

A few interesting anecdotes discussed in the sefer include a discussion regarding an incident where women were given a quill by a sofer writing a Sefer Torah in the home of Reb Yisroel Noach Schneerson – the Admor of Nizhyn and son of the Tzemach Tzedek, to be given back to the sofer; an analysis of the Alter Rebbe’s opinion regarding black-on-black retzuos, and an insight from the Tzemach Tzedek on the Alter Rebbe’s opinion regarding lefty tefillin worn by a righty.

“There are many more interesting relevant rulings in this sefer which will enhance your knowledge in the area of something we do every day,” Rabbi Kahn said. “In addition, two of the main subjects – tefillin and mezuzos, are part of the Rebbe’s holy mivtzoim!”

The new sefer is available in Crown Heights seforim stores and anywhere quality seforim are sold. It can be purchased online here.