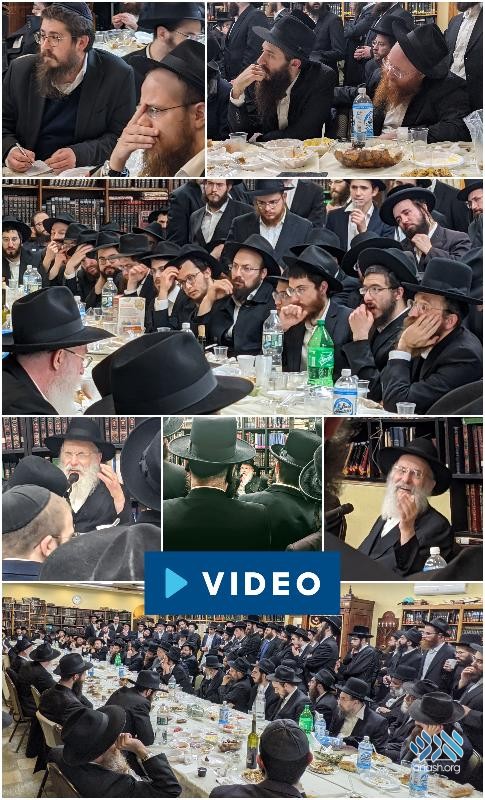 Yud Tes Kislev in the central Crown Heights kolel is a highlight of the year when the rosh kolel, Harav Yosef Heller, farbrengs and shares practical guidance on Chassidus and contemporary dilemmas in avodas Hashem.

At this year’s farbrengen which lasted over 8 hours, Harav Heller addressed key issues and answered burning questions from the crowd. We are pleased to bring you selected highlights from the farbrengen.

Our thanks goes to the transcriber and to the editor who shared them with us.

Chassidus is most effective when it comes with a yearning to find the Eibershter. When you wake up and eagerly say Modeh Ani, wash negel vasser and then enthusiastically recite birkos hashachar. Then, with a desire to meet the Eibershter, you learn Chassidus and find Him there.

In Boston University there are classes on Talmud, chassidic philosophy, Breslov and Chabad. That’s not learning Chassidus; that’s reading books. Someone could learn that way in yeshiva too.

Q: How can an American boy who grew up on jellybeans and green pants be a chossid?

A: We must learn Chassidus with him in his green pants. There’s no point in telling him to change his pants, since then he will simply be a “green pants boy” dressed up in black pants. When he learns Chassidus, then whatever he does, he will do with sincerity. And one day he might also realize that green pants aren’t fitting for a chossid.

Reb Binyomin Mentz z”I was born in Pittsburgh. His grandfather was the learned one in the family: He prepared his grandchildren for their bar mitzvah, taught them the haftorah and the brachos, their speech, and how to put on tefillin at least that one time. He once told his grandson that he would show him something very rare which he would probably never see again in his life. It was a Gemara Bava Kama.

Then an ad appeared in the newspaper that the Lubavitcher Rebbe had arrived in New York and opened a yeshiva free of charge. He joined and got to see the Gemara again. His grandfather once met him walking with a Sefer and asked him, “Aren’t you embarrassed to walk around like that?” He answered with a proud “No!” That’s what the situation was in America at that time.

What does it mean to daven with geshmak? Not to just ‘say the words.’ For a working person, 5 lines of real davening can be enough. But in those 5 lines he should connect to Hashem.

To a degree, we are all pretenders. It pays for us to be frum, so we do it. Those who go off the path of Yiddishkeit are honest since they show their true colors. You can’t look down on anyone. The Baal Shem tov says that what you see by someone else is what’s going on by you.

This person doesn’t keep Shabbos. But neither do I. Can I really say that I keep Shabbos just for the sake of Shabbos? I do it in part because it’s my family custom and my community custom.

You can’t help someone if you think that he’s bad and you’re good. If you consider yourself in the same boat as him, then you can try to work on your problems together.

I once spoke at a Shabbos farbrengen and demanded the bare minimum of avoda, based on my estimation of what the crowd could handle. One of the people present asked me to demand more. It was worth the whole farbrengen just to hear that.

I once asked Reb Leizer Nanes where he got the strength from to keep Shabbos in Russian camps for 20 years. He told me, “Tomchei Temimim taught us not to fear anyone, but the One alone.”

Reb Moshe Katzenelenbogen a”h survived Pesach on a few sugar cubes in a communist prison. He told me it wasn’t hard at all. He simply made a firm decision before Pesach not to eat chometz. Not “let’s start and see how it goes.” That wouldn’t have worked. It was a firm decision that “A yid doesn’t eat chometz on Pesach!”

Reb Nissan Nemenov would say the whole Tehillim before davening, sometimes twice, so that he should be able to daven properly. He once wrote to the Rebbe that he says Tehillim and the tears run freely, but he’s not sure it’s coming from kedusha.

A person can feel holy that he cried, but that’s not real. That’s what Reb Nissan was concerned about.

Reb Shlomo Chaim Kesselman taught iskafya on מדר”ש – מחשבה, דיבור, ראיה, שמיעה – thought, speech, sight, hearing. You don’t need to run to the window when you hear noise outside! Later you’ll complain that you have machshavos zaros. The same is true for following what is happening in Washington.

Reb Pinye Korf, may he have a refuah shleima, never thought about what goes on in Washington. That’s the type of person one should aspire to be.

I heard from R’ Leibel Groner more than once (and from others as well) that the Rebbe held very highly of the Satmar Rov. I think it’s because he only thought about ratzon Hashem without worrying about what anyone thought.

A top bochur in Lakewood one day lost his ability to learn. The father called me and told me to ask the Rebbe since he has a lot of experience and probably would know how to deal with such cases. I told him that if that’s the approach I won’t mention it. A Rebbe isn’t a “smart man with experience.”

He called back the next day and asked me to ask the Rebbe advice “as a Rebbe.” I told him that I don’t believe that he’s truly ready to accept the Rebbe.

Finally, he called again and asked me to ask the Rebbe for a yeshuah. I agreed and the Rebbe gave some instructions to go to a certain doctor, to learn Chovas Halevavos and one more instruction. The bochur was then helped.

The Torah says, “vayaaminu baHashem ubeMoshe avdo,” and they had faith in Hashem and in Moshe his servant. Moshe was a smart man and very learned. Yet, we don’t pay attention to that. We focus on the fact that he was an “eved Hashem.”

To be mekushar to the Rebbe doesn’t mean to sing the same song the Rebbe sang. It means to be an “eved Hashem” like the Rebbe!

If you come to the Rebbe because he’s a smart and special man who can give good advice and give brachos, then you’re missing it. If you come to him because that’s where Elokus is revealed, then you got it.

The process is: First, “vayaaminu baHashem” faith in Hashem. Then, recognize that Moshe is “avdo,” Hashem’s servant, and that you’ll find Hashem by His servant.

The Rebbe didn’t look at what other people said or thought. If things I looked “Rebbish” or not. Only what the Eibershter wants. Don’t look at your father or grandfather. If you believe in Hashem because that’s what your father does, then you don’t truly believe!

Someone asked, “What should I do if I never saw the Rebbe?” What’s the big deal if you didn’t see the Rebbe’s body? The Rebbe is a neshama to which you can always connect. The Rebbe gave us enough sichos and maamorim to live with for 100 years. And that’s before we look at the Igros Kodesh.

They have a living Rebbe. Living means living inside them.