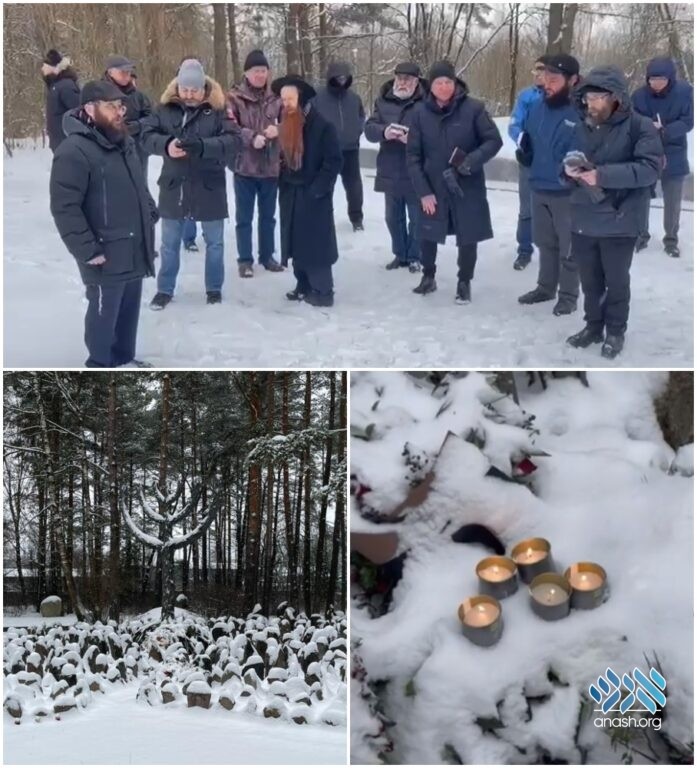 Latvia’s Jewish community gathered on 10 Kislev to commemorate the anniversary of the mass murder of Riga’s Jews among them a number of prominent Chassidim.

Latvian shliach Rabbi Mordechai Glazman and a minyan of local Jews gathered at the scene of the massacre in the Rumbula Forest near Riga to recite Tehillim and Mishnayos in memory of those who perished.

About 25,000 Jews were murdered in the Rumbula forest near Riga, Latvia, during the Holocaust. The Rumbula massacre was carried out by the Nazis with the help of local Latvian collaborators.

A number of prominent Chassidim were among the Jews murdered in the Yud Kislev massacre. Among them were Reb Eliyahu Chaim Althaus, Reb Refoel Cohen, and Reb Hillel Gurevitch. Reb Chatshe Feigin, Reb Mordechai Cheifetz, and Reb Itche Masmid, were also likely killed on that day.

According to another version of events, Reb Chatshe, Reb Mordechai Cheifetz, and Reb Itche were actually killed in the summer of 5701/1941 in the Riga Shul.

The Nazis rounded up hundreds of Yidden and locked them into the shul. Once the building was full poured gasoline on it, and set it ablaze, burning everyone alive.

From outside, the Yidden saw how Reb Itche masmid opened the aron hakodesh, took out a sefer Torah, and declared: “We have the zechus to sacrifice our lives al kiddush Hashem, and we must therefore be happy!”

With that, he placed his hands on the Reb Chatche Feigin, and they began dancing to the tune of Reb Leivik’s hakafos niggun.