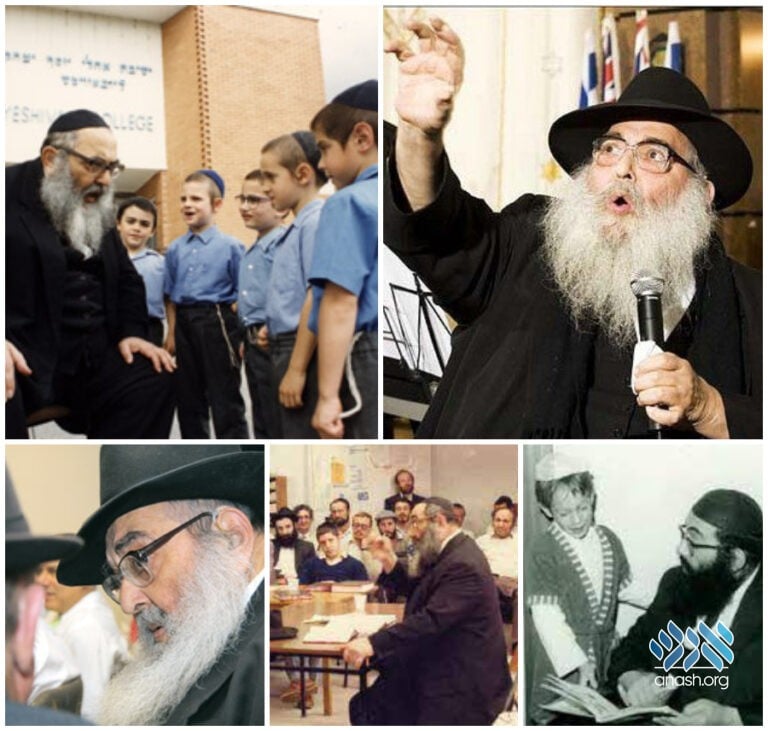 Rabbi Yitzchak Dovid Groner, who passed away on 4 Tammuz 5768, was the man who built Lubavitch in Australia. He was known for his dynamic personality and his exceptional love for his community.

Reb Yitzchok Dovid Groner grew up in New York in close proximity to the Frierdiker Rebbe and the Rebbe. In 5719, the Rebbe sent him and his family (including six children) with a Shlichus to build Yiddishkeit in Australia.

Reb Yitzchok Dovid was a human dynamo. After arriving in Australia, he quickly expanded the yeshiva and the Beis Rivkah schools, and added many new institutions over the following years.

He also served as the rav of the Lubavitcher community, answering urgent shaalos at all hours of the night and day, and also taught a number of classes for the community

He was also a powerful speaker, much sought out throughout the region to address dinners, weddings, and all sorts of functions, where he would entertain the gathering with his powerful voice and commanding style. His presence filled the entire room.

Yet, with all of his monumental responsibilities, Reb Yitzchok Dovid was best known for his personal relationship with every member of the community. He knew the name of every child in shul; he maintained a list of phone numbers of people needing emotional support, calling them on a regular basis.

The atmosphere he created was that of a family; if someone missed a shiur, he would immediately inquire about the person’s well-being. In the case of a someone’s weakness in his observance, Reb Yitzchok Dovid would sometimes send a loving and often humorous rebuke, “reminding” the individual of the existence of the shiur and encouraging his continued participation. His rebuke was legendary; he could loudly berate a person and go on and on about the terrible deed the person did; but no matter how much he spoke, the person wouldn’t feel offended. To the contrary, it was loved and accepted.

Part of his charm was in his candidness; with Rabbi Groner, there was no small talk and no concealed feelings. When he fundraised, he could pick up the phone and tell a local benefactor, “My friend, I need twenty thousand dollars for the new building.” He spoke his thoughts directly from the heart yet was always sensitive to the other person’s feelings.

As the institutions expanded and the workload grew, the Rebbe told Reb Yitzchok Dovid to watch his health. The key to success in the mosdos in the long run, the Rebbe said, was keeping a proper schedule even within all the mayhem and eating and going to sleep on time. The Rebbe also instructed him to hire a secretary to do all of his technical work, and if one wasn’t enough, he should hire two secretaries.

Rabbi Groner was blessed with a loud and melodious voice, and was a powerful and heartfelt baal tefilah. His selichos and Yomim Noraim davening would attract a large crowd, but he always refused to serve as chazzan in 770, in front of the Rebbe.

The reason behind his refusal was an experience he had as a young bochur. One Rosh Chodesh, when the Frierdiker Rebbe was saying kaddish after the histalkus of his mother Rebbetzin Shterna Sarah, a minyan had been assembled for the Frierdiker Rebbe upstairs in 770, but no one stepped up to lead the davening. Reb Shmuel Levitin suggested an elderly Chossid Reb Dovid Shifrin, who had spent time by the Rebbe Rashab, to be chazzan.

He responded in shock: “I, with my machshavos zaros, should daven in front of the Rebbe? No!” He ran down the stairs and out the door.

Reb Yitzchok Dovid once spoke to the Rebbe in yechidus about difficulties he was experiencing. The Rebbe responded with a powerful hora’a that every morning, whether prior or following birchos hashachar, anyone who saw the Frierdiker Rebbe should go to a corner and envision his holy countenance; after doing so, his work will be accomplished on an entirely new level.

In 5727, Beis Rivkah of Melbourne opened a new building, and the Prime Minister of Australia, Mr. John Gorton, attended the dedication ceremony. This gesture brought a lot of esteem for Lubavitch in Australia, and Judaism in general.

Reb Yitzchak Dovid called his brother Rabbi Leibel Groner and asked him to inform the Rebbe of the outstanding success of the event: “The success was so great that we could never convince ourselves that it was brought about with our own strengths,” he said.

The Rebbe instructed Rabbi Groner to relate the news to his parents as well.

“Tell your parents what their son achieved. Why shouldn’t they have nachas?”

Their Shlichus to Australia was initially set out as a three-year trial period. Life was not easy, and at the end of the three years, Reb Yitzchok Dovid traveled to New York for a Yechidus. The Rebbe spoke to him for fifty-five minutes, telling him that Australia has the potential to be a bastion of Yiddishkeit; “It can become like Bnei Brak, Williamsburg or Crown Heights.”

The main points the Rebbe later reiterated in a long, beautiful English letter to Mrs. Groner.

“In regard to your question, ‘Whose ship is it?’ I am surprised that you should have any doubts about it, since, obviously, the ship is that of my father-in-law of saintly memory, our Nossi and the Nossi of our people…

“As I have emphasized to your husband…previously he was in the capacity of an employed “clerk,” and as such, there were certainly a number of advantages. A clerk has definite hours, and upon completion of his day’s work he can dismiss it from his mind, knowing that the responsibility lies squarely on the shoulders of his superior…On the other hand, when one has the task of an executive, upon him the full responsibility rests…

“Obviously… one who has the capacity to be an executive and in charge of a responsible undertaking, if such a person should find himself within the framework of a clerk’s job, it would be a gross injustice even to himself, not to mention to the cause.

“I mentioned to your husband the experience in a somewhat similar situation, when the father of my father-in-law sent two Jews to Gruzia (Georgia), a remote and neglected region. The two emissaries so transformed Jewish life there that even now, 45 years later, we find grandchildren of those native Jews in New York who are strictly religious and devoted Chassidim.”

Then the Rebbe added a postscript. There were other Lubavitch women in Australia, but she did have an important advantage:

“You have the advantage of having been in the proximity of my father-in-law and having imbibed directly from his fountains, whereas the other women in Australia can do so only from a second or third vessel.” The fact that she had lived in close proximity to the Rebbeim gave her a “competitive edge” in the field of hafatzas hamaayanos.

Needless to say, Rabbi and Mrs. Groner quickly came to a decision. They informed the Rebbe that they would remain in Australia.

Order the special Gimmel Tammuz Derher edition today and save 15%!