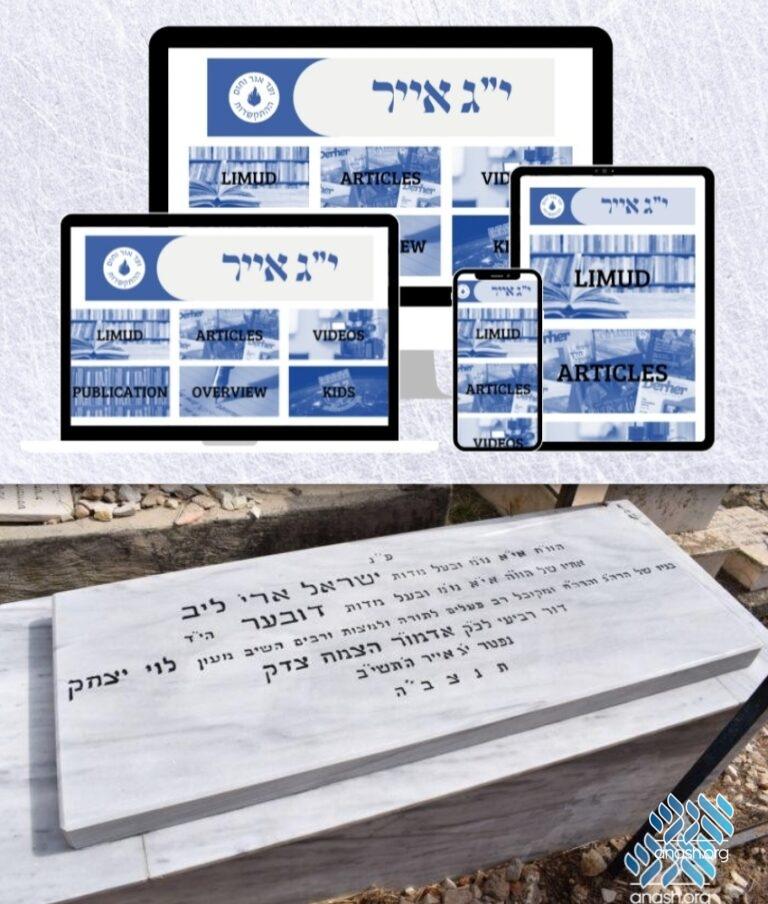 As we approach 13 Iyar, the 70th Yahrtzeit of the Rebbe’s Brother, Reb Yisroel Aryeh Leib, Vaad Or Vechom Hahiskashrus presents an overview of his remarkable life and a one-stop resource site to prepare for the day.

As we approach Yud Gimmel Iyar, the 70th Yahrtzeit of the Rebbe’s Brother, Reb Yisroel Aryeh Leib, Vaad Or Vechom Hahiskashrus is pleased to share a website filled with many resources including ready-to-print articles in English and Hebrew, a short presentation for children, Maamorim, Sichos, Mishnayos and videos, with the goal of helping your family, school and community prepare for and learn more about this day in the most effective way possible.

Below is a detailed recount of the life of Reb Yisroel Aryeh Leib, brought to life through links to sources and other interesting material, prepared by Vaad or Vechom.

An Overview on the Life of Reb Yisroel Aryeh Leib

The Rebbe’s Brother, Reb Yisroel Aryeh Leib Schneerson lived a very private life. Many Chassidim hadn’t heard of him until he passed away in 5712 (1952).

In recent years the community birth records of Nikolayev, the Rebbe’s hometown was recovered and they found the birth record of Reb Yisroel Aryeh Leib which was 21 Iyar 5666 and his Bris was on 4 Sivan. Reb Yisroel Aryeh Leib was known to be brilliant from a young age. In Reshimos Harabash in the year 5675, his grandfather, Reb Boruch Shneur, mentioned to the Rebbe Rashab that “my son Horav Levi Yitzchok has a son who is a prodigy, a Boki in Gemora and Medrash, and he learns very well.” The Rebbe Rashab asked, “How old is he?” to which he responded, “Bez”H before Shavuos he will turn nine years old.”

Many other accounts illustrating Reb Yisroel Aryeh Leib’s brilliance from a young age were printed in Kovetz Yud Gimmel Iyar (Hebrew) and, in a comprehensive article in ‘A Chassidisher Derher’ (English).

Reb Yisroel Aryeh Leib was very much cherished by the Frierdiker Rebbe. In the Rebbeim’s chronological account in the beginning of Hayom Yom, the Rebbe wrote about his brother that Reb Yisroel Aryeh Leib was “cherished very much by the Rebbe Rayatz, who gave him personal attention. He was also adored by the Chassidim, who loved to engage him in discussions of many subjects of Halacha and Chassidus…”.

It is interesting to note that the first Reshima of the Rebbe dated 5 Teves 5689 (1928) records a vision that the Frierdiker Rebbe had of the Rebbe Rashab in which Reb Yisroel Aryeh Leib was present.

With the spread of Communism in 5691 (1931), Reb Yisroel Aryeh Leib moved to Berlin, Germany under the name Mark Gurary where he lived with the Rebbe and Rebbetzin (the name Mark Gurary was adapted from a cherished acquaintance of the Rebbe’s family Mordechai Gurary who tragically perished at a young age in Yeketrinaslov). [There is a letter from the Rebbe’s maternal grandmother Rebbetzin Rochel Yanovsky, with New Year wishes for the Rebbe and Rebbetzin from this time period, at the bottom of the letter Rebbetzin Rochel added a few lines to Reb Yisroel Aryeh Leib.]

In the summer of 5693 (1933), he immigrated to Israel where he met his wife, Regina Devorah Milgroom, and married on 30 Av 5699 (1939) his mother, Rebbetzin Chana records in her memoirs “He (Horav Lev Yitzchok) showed me a letter… that he had received news from Eretz Yisroel that our son Leibel had married.”

Reb Yisroel Aryeh Leib had one child, a girl whom they named Dalia, she was born on 20 Cheshvan 5705 (1944). Rebbetzin Chana mentions her in part 36 of her memoirs. In part 39 of her memoirs, she writes about the pain of not seeing her son for 29 years. “I haven’t met her, and I haven’t seen her father for 29 years…. I don’t often receive letters [from my youngest son], although I’m happy when I see his handwriting.” (This was already after he passed away, as follows.)

The Rebbe kept a close relationship with Dalia, as she related in an interview: “My uncle liked me a lot.” She related how when she would visit the Rebbe in New York she would stay in the Rebbe’s house on President Street and he would come outside to help her with her luggage. Her husband Mr. Avner Rothman recalls how he would often consult with the Rebbe for business and personal matters.

While in Israel, Reb Yisroel Aryeh Leib worked as a librarian and later opened a clothing store. His wife worked in a pharmacy. He kept in close touch with the Chabad Community in Tel-Aviv and especially Rabbi Nochum Goldschmidt, his Cheder classmate, as is evident from a few stories we know from this time.

The Rebbe used to send all the newest publications from Kehos to his brother in Tel-Aviv. Rabbi Nochum Goldscmid, related that when Reb Yisroel Aryeh Leib received the Hayom Yom he commented, “My brother sent me his first composition!” followed by a sigh and “How sad, that no one perceives what is concealed inside it.”

Reb Yisroel Aryeh Leib moved to Liverpool, England in 5710 (1950) to join the Department of Theoretical Physics at the University of Liverpool. He passed away two years later on 13 Iyar 5712 (1952) . Rabbi Berel Junik documented the events of that tragic day.

After his passing, the Rebbe directed the Chassidim in England, especially Reb Bentzion Shemtov, as well as the Chassidim of Israel, how to take care of Reb Yisroel Aryeh Leib’s burial. A few days after the burial the Rebbe sent a letter of appreciation to all involved. Chassidim would visit Reb Yisroel Aryeh Leib’s Kever in Tzfas from time to time, sometimes informing the Rebbe of their visit which received replies of thanks. The Rebbe would inquire about the condition of the Kever. In 5731 (1971) when Rabbi Yitzchok Dovid Groner was planning to be Israel the Rebbe related to him “I have a brother who is in T’veriya [Tzfas], you should go there and see if the Kever needs to be repaired and you should put a Tzetel there as well.” Upon returning from the trip Rabbi Groner wrote a detailed Duch to the Rebbe. another time, the Rebbe asked Rabbi Dovid Raskin upon his return from Tzfas, “Is the situation bad – does it need some repair?”

It is well known that the Rebbe hid the passing from his mother. Mrs. Fruma Junik relates the extreme measures her husband, Rabbi Berel Junik had to take to shield the tragic news from Rebbetzin Chana. The Rebbe arranged for letters to be sent to his mother imitating the handwriting of his brother. At some point, the Rebbe arranged for a letter to be sent to his mother in his brother’s name that he was hired to a position in the Atomic Commission and he can’t accept visits. This was to ensure that Rebbetzin Chana wouldn’t send anyone to visit him in England, as Rabbi Chazkel Besser, a close acquaintance of the family relates in an interview with the “My Encounter” team.

After his passing, Chassidim learned more about the life of the Rebbe’s brother. The Rebbe spoke about his brother on  numerous occasions, sometimes explaining the deeper meaning of his name. Each year on his Yahrzeit the Rebbe would recite Kaddish in his memory.

As previously stated, the Rebbe took a great interest in his brother’s family. A few days after his passing the Rebbe sent a letter asking to look after his brother’s wife and daughter, suggesting that Reb Yisroel Aryeh Leib’s wife, Regina focus on her occupation while Dalia focuses on her education, which they did as Regina moved back to Israel shortly after that to pursue her career in pharmaceuticals.

The Rebbe also took an interest in Dalia’s personal life, often sending people to visit her. For example, after she gave birth to her first son, the Rebbetzin helped with arranging the food for the Bris which took place in Washington DC (where they lived at the time). Rabbi Chazkel Besser who was the Sandek, was asked to consult with the Rebbe regarding a name for the baby, he called the Rebbetzin who called him back 20 minutes later and replied “The father and mother should make the decision.” In the end, the child was named Ariel after her father.

It is also well-known that the Rebbe took interest in his brother’s complex mathematical theories. During the farbrengen of Yud Shevat 5735, a conversation between the Rebbe and Professor Paul Rosenblum shed light on the Rebbe’s efforts to have the sole surviving work be published in a proper manner. They later followed up in letters and eventually Reb Yisroel Aryeh Leib’s work was published titled “ The Location of Eigenvalues and Eigenvectors of Complex Matrices” under the name M. Gurary (not mentioning the fact that he is the Lubavitcher Rebbe’s brother, as the Rebbe explicitly told Rosenblum: “I want it to stand on its own merits.”). The document also speaks of other analogs of Reb Yisroel Aryeh Leib that have unfortunately been lost.