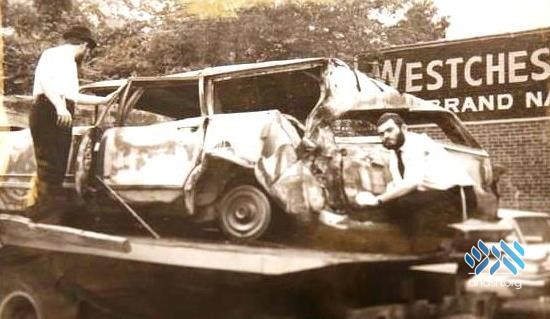 50 years ago today, a group of 770 bochurim were involved in a fiery crash. Through great nissim, they survived.

“On Monday Zayin Tammuz 5729/1969, a group of 9 bochurim from 770 went to to a chasunah of their chaver, R’ Elchonon Geisinsky, taking place in Boston. I was one of the bochurim; the chosson was also my second cousin.” So begins Rabbi Yosef Minkowitz’s account of a trip that ended in a disastrous crash, and a miraculous rescue.

The bochurim left from 770 after mincha with a rented car; their plan was to go to the wedding and drive back immediately after so they could catch a short nap and be on time to seder the next morning.

“After the wedding, we piled into the station wagon and headed back to Crown Heights,” Rabbi Minkowitz continues. “In the front row sat Shmuel Leit, Eli Hecht and Meir Minkowitz. In the middle row sat Leibel Kaplan, Sholom Ber Levitin and myself. In the third row sat Shloma Majeski, Yosef Samuels and Hirshel Morozov.”

About an hour away from Crown Heights, the car slowed down as the driver prepared to get off at the next exit. A tractor trailer was zooming down the highway behind them; the driver swerved into the next lane to avoid hitting them. Unfortunately, he moved too late, and the trailer hit the left side of the vehicle.

The impact lifted the car into the air, causing it to spin several times before it landed against a guardrail on the side of the road. Immediately, the entire car was engulfed in flames. The road was full of gasoline, which caused the fire to spread extremely quickly- it was as though the whole highway was one big ball of fire.

“I was sitting behind the driver’s seat, right next to the gas tank,” Rabbi Minkowitz recalls. “I tried to open the door, but the handle had melted and the door was completely deformed; it was impossible for me to open it.”

The three bochurim sitting in the front were able to open the doors and escape the car immediately. Those sitting in the back row were saved by a big nes. The back door of a station wagon can only be opened from the outside. Since there was no one there to open up the door for them, they should have been trapped inside.

“Hakadosh Baruch Hu makdim refuah lemaka,” Rabbi Minkowitz proclaims. “The impact of the crash caused the entire back window to come out as one piece, and the bochurim in the last row were able to escape through the open window.”

Rabbi Minkowitz and the two other boys in the middle row were trapped, with fire surrounding them on all sides. “I actually saw my hands, the flesh was coming off; I literally saw my bones. I couldn’t get out. I said shema yisrael, and realized that this was it.”

With great nissim, Rabbi Leit was able to get past the fire to open the door on the right side, and the three boys who had been trapped in the middle were able to get out.

“It was a mazal that I was wearing a synthetic suit jacket, which burns more slowly than wool,” Rabbi Minkowitz shares. “But my hands, my face, my head- they had third degree burns.”

As soon as they got out of the car, it completely erupted in flames. There was nothing left of it.

After a quick head count, they discovered that someone was missing: Rabbi Majeski was nowhere to be found. By that time, it was impossible to go back to the car to rescue him, as it was completely surrounded by fire.

A few minutes later, Rabbi Majeski suddenly appeared. When he had jumped out the back window, he had landed over the guardrail and begun rolling down a hill. It took him a few minutes to get back up, but Baruch Hashem he was safe!

Soon, the police arrived, and asked how many people were killed in the accident. When they heard that everyone had survived, they were shocked! They said they had never seen an accident like this where everyone came out alive.

It was a great nes that everyone survived; the trailer had hit the car very hard, yet no one was harmed by the impact! Three of the bochurim, however, were taken to the hospital with severe burns.

Several months before the accident, on Acharon shel Pesach, the Rebbe spoke about Crown Heights, and the importance of not leaving or selling the houses in the shchuna. The Rebbe asked Reb Yoel to prepare the sicha for publication. After it was completed, Reb Yoel sent it in to the Rebbe, who added a few sources.

The kuntres was reprinted and once again sent to the Rebbe, who was magia it; however, in spite of the fact that the Rebbe had urged to have it ready quickly, the Rebbe did not release it.

The month of Nissan ended, the entire months of Iyar and Sivan passed, and Tammuz began.

Suddenly, on the night of Ches Tammuz, the Rebbe gave over the sicha to be printed. However, a number of hosafos had been added. These hosafos brought down what is written by the Alter Rebbe, that after a fire comes great wealth. In addition, the Rebbe had added hosafos where the Mitteler Rebbe and Tzemach Tzedek elaborate on this inyan as well.

The Rebbe said that it should be printed immediately with the hosafos, which seemed completely unrelated to the original sicha. This occurred 6 hours before the accident.

After the crash, the three bochurim who had been sitting in the middle row were taken to the hospital; the other 6 had escaped, through great nissim, without a scratch.

The next morning, Rabbi Meir Minkowitz went into Rabbi Hodakov and told him all that had happened to them. Rabbi Hodakov went in to relay the incident to the Rebbe; when he came back minutes later, his face was pale.

The Rebbe had told him, “When I gave out the kuntres with the hosafos regarding a fire, I had them in mind.” Rabbi Hodakov exclaimed, “Such open ruach hakodesh, such open nissim!”

After mincha, the Rebbe asked Rabbi Leibel Groner for details about the crash. The Rebbe then said, “It seems that specifically for them I gave out the hosafos to the sicha last night.” He then instructed Rabbi Groner to give each of the nine bochurim a copy of the proofs before the sicha was publicized.

Each bochur received a copy of the proofs with a sheet stapled on top of it. On that paper, Rabbi Binyamin Klein had written the Rebbe’s instructions, including a bracha to each of them for a refua shelema ukrova, and to be a Chassid, Yarei Shamayim and lamdan.

Baruch Hashem, the three bochurim who had been injured were healed; the doctors declared it an open miracle.