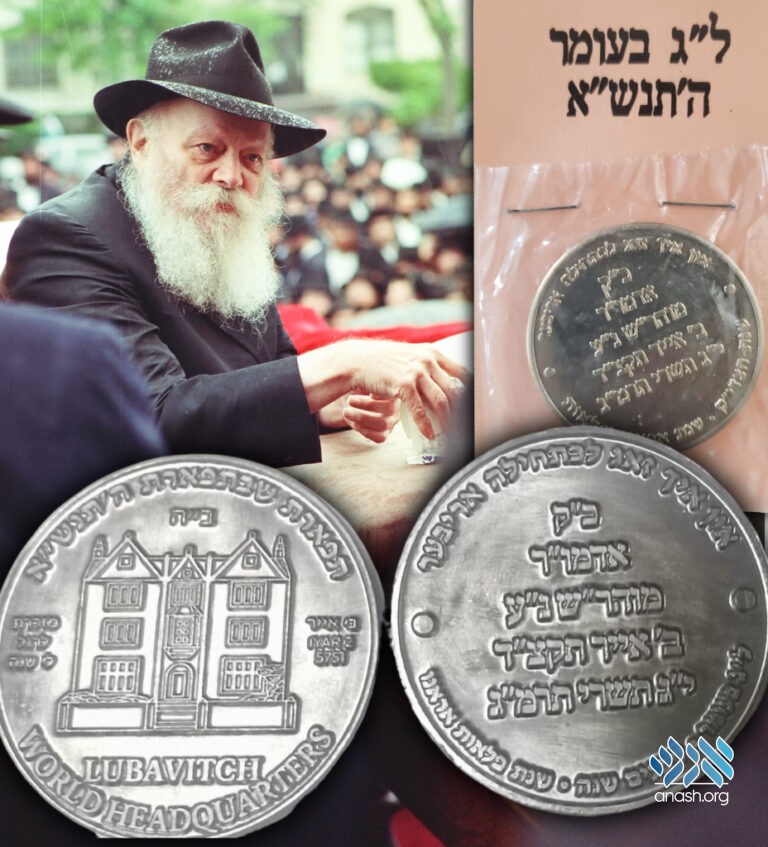 A replica of the coin minted especially for Lag B’omer 5751, and personally distributed by the Rebbe to thousands of chassidim, will be given to all attendees of the grand Lag B’omer rally this year.

30 years ago, on Lag B’Omer 5751, the Rebbe stood and personally distributed thousands of coins to chassidim in 770.

The previous year, at the Lag B’Omer parade of 5750, the Rebbe also requested that coins commemorating Lag B’Omer be made and distributed to all the participants, although the Rebbe did not personally give the coin to each person. “The coin from 1990 is now very famous, but it seems the coin from 1991 is not remembered as much,” said Shimon Sabol, coordinator of the rally for NCFJE. “We wanted to highlight this unique occurrence on its 30th anniversary, educate the children and give them something tangible they can connect with and cherish.”

A replica of the coin was commissioned with slight changes to the date and an added line stating it is a memento of the 30th anniversary. Despite worldwide production and shipping being slowed due to Covid-19, the coins were able to be made and are scheduled to arrive in time for Lag B’Omer and will be distributed to all participants of the rally outside 770 on Friday morning. One lucky child will win one of the original coins, graciously provided by Rabbi Chaim Yehuda Krinsky, chairman of Merkos L’Inyonei Chinuch.

The theme of the rally will follow suit, including the singing of the Nigunim of Shuva Hashem (which was composed 30 years ago) and L’chatchila Ariber, and a special video presentation explaining the concept of L’chatchila Ariber to children in a simple and practical way. There will also be performances by Benny Friedman and the Flippenout Extreme Trampoline Show.

As there is limited capacity, the seating area in front of 770 is reserved for schools only, individuals in the community who would like to join are asked to stand on the other side of Eastern Parkway or in the plaza in front of the JCM.

The rally will also be streamed live on Chabad.org/rally

Lag B’Omer is known as a special day on which many miracles occur, especially in regard to children. It is considered a segula to donate “Chai Rotel”. To participate in the rally and celebration of Lag B’Omer financially, please visit https://secure.givelively.org/donate/national-committee-for-the-furtherance-of-jewish-ed/lag-b-omer-5781