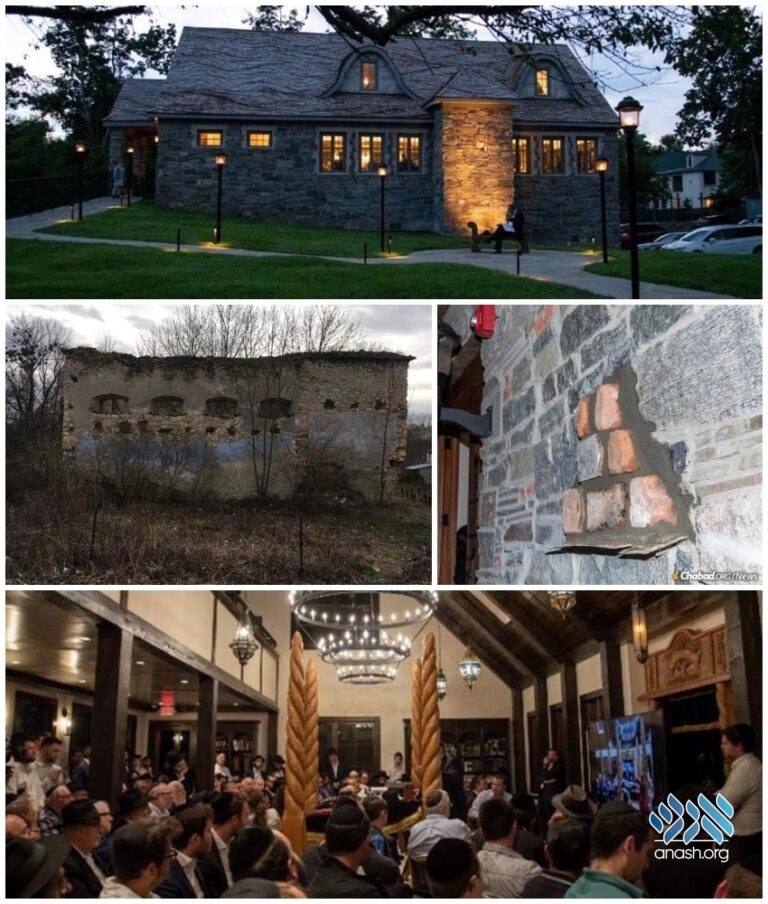 In Monsey, a shul modeled after the Baal Shem Tov’s synagogue in Medzhybizh is being built. 22 bricks retrieved from the rubble of original shuls destroyed during the Holocaust were incorporated into the building.

Following the near decimation of Jewish life in Europe during the Holocaust, many survivors and their descendants have bravely sought to rebuild a world that had been all but destroyed.

In Wesley Hills, N.Y.—a bucolic Jewish enclave about an hour north of New York City—a piece of that reconstruction is in the form of a newly built synagogue that is a near-exact replica of the Baal Shem Tov’s synagogue in Medzhybizh in Western Ukraine.

The synagogue—already ancient when the Baal Shem Tov, the founder of the Chassidic movement, settled in Medzhybizhin in the 18th century—was shuttered by the Communists in 1939 and in 1942 burned by the Nazis, who enslaved and then shot and killed the town’s Jews.

Even as the physical building was reduced to charred rubble and the bodies of its congregants were dumped into three mass graves outside the town, the synagogue’s soul lived on in the hearts and minds those who had been touched by the soul-stirring teachings of the Baal Shem Tov, and by the many stories of his prayers and leadership of the fledgling Chassidic movement from the small shul that was his spiritual home.

Eighty years after its destruction, as the youngest Holocaust survivors enter their twilight years, a group of philanthropists from the Monsey, N.Y., area built a replica of the synagogue to house a neighborhood congregation that was in need of a new home.

“The shul’s design is meant to tell the story of our people, how we’ll never forget, how we’ll always rebuild,” says R’ Dovid Lichtenstein, one of the founders.

When asked why they chose to have the building modeled after the Baal Shem Tov’s synagogue, he explained that Judaism’s continued existence into the 21st century is in great part a credit to the Baal Shem Tov, the founder of the Chassidic movement, who breathed joy, hope, inspiration, and spirituality into the lives of the Jews of Eastern Europe, then and now.

As part of the initiative, 22 bricks were retrieved from the rubble of synagogues destroyed during the Holocaust and shipped to Wesley Hills, where they were built into the structure.

Due to the ongoing war in Ukraine, bricks could not be collected from synagogues there and are all from sites in Poland, mostly from cities that have long lost their Jewish populations.

Additionally, recent excavations uncovered remains of the Mila 18 bunker in the Warsaw Ghetto that held Rabbi Menachem Ziemba, who encouraged resistance against the Nazis and refused to abandon his brethren in the ghetto; the Piaseczner Rebbe, Rabbi Kalonymus Kalman Shapira, known as the Rebbe of the Ghetto; and leaders of the Warsaw Ghetto Uprising.

One complete brick, seven fragments, and three pieces of scorched wood were gathered from the foundations of the bunker and shipped off to Monsey to become part of the synagogue.

On the fast of Tisha B’Av, observed this year on Sunday, Aug. 7, the day that the liquidation of the Warsaw Ghetto began, a brick-laying ceremony was held in the nearly complete synagogue, which is already in use.

Present was a group of five Holocaust survivors who helped cement the bricks into the wall.
In explaining the significance of the bricks, organizers quoted a 1943 entry in the “Diary of the Warsaw Ghetto” by journalist Hillel Seidman: “[W]here else had so many Jews fallen al kiddush Hashem than these roads of the Warsaw Ghetto? Every street is a Mount Moriah, every stone is an akeidah. If, by some miracle, I survive this madness, perhaps I should bring a stone from Nalewki Street to Eretz Yisroel and place it alongside the Kotel Hamaaravi. When Jews come on pilgrimage to that sacred site, they should weep over this stone for the loss of all their loved ones, for the destruction of a large segment of klal Yisrael.

Seidman did survive the war, but the stones of Nalewki Street, along with all the bricks and stones that made up the Warsaw Ghetto, were bulldozed and paved over by a Poland that was all too eager to forget the millions of Jewish denizens who had been shot, burned, and gassed.

The new synagogue is located in the affluent village of Wesley Hills. However, Lichtenstein is quick to explain that attendees represent all strata of the socio-economic ladder. He says this is particularly so since several of the area’s most wealthy residents have guest houses on their estates in which they house (for free) families from abroad who are in the area for medical treatment and need semi-permanent housing.

“The community welcomed us over a year ago,” says Chabad Rabbi Shmuly Altein, who together with his wife, Adina, co-directed the Jewish Learning Centre in his hometown of Winnipeg, Manitoba. “We are humbled by the kindness and love extended to our family while we are here for treatments at Columbia Medical Center.”

Unable to teach their own community back in Canada, the Alteins both relish the opportunity to deliver classes, laced with Chassidic teachings, in the new synagogue.

They are far from unique. The current occupants of a nearby guest house are refugees from Ukraine whose 4-year-old daughter was diagnosed with cancer a week after they fled to Israel and are now in the New York area for treatment at Memorial Sloan Kettering Cancer Center.

“This is what the Baal Shem Tov would have wanted,” says Lichtenstein, “people sharing with each other, inspiring each other, and growing together.”