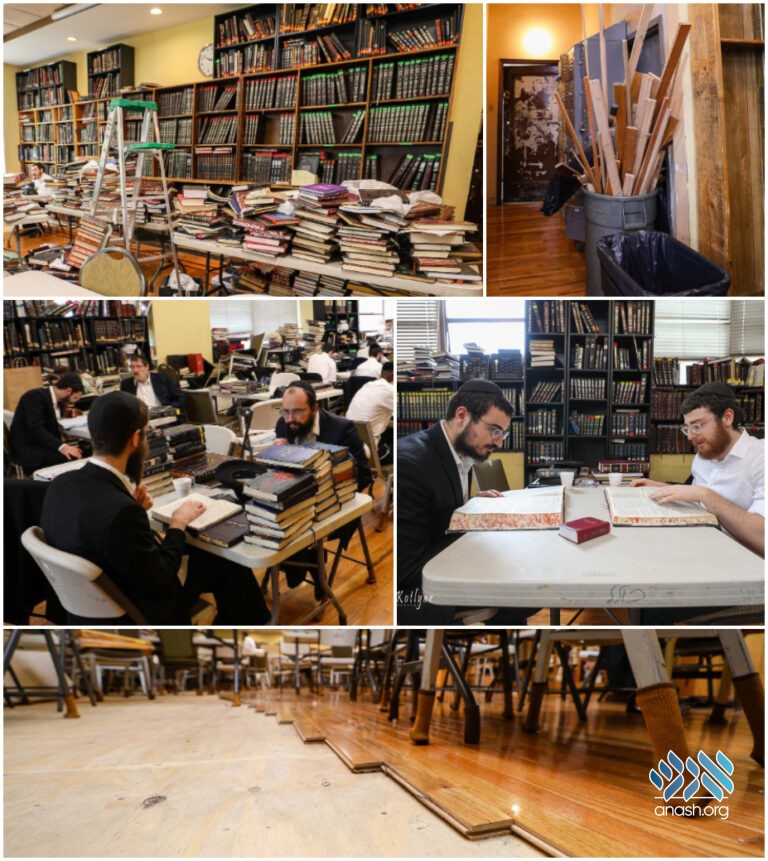 Kollel Menachem of Crown Heights, Chabad’s flagship Kollel, has begun upgrading its Beis Medrash by installing new floors, replacing the decades-old flooring which was in need of urgent repair.

Kollel Menachem of Crown Heights, Chabad’s flagship Kollel, has begun long-overdue renovations and improvements to its Beis Medrash located on the corner of Kingston Avenue and Union Street.

Kollel Menachem – the Chabad Lubavitch Kollel, was established by the Rebbe in 5722/1962, under the aegis of Machne Israel and the Mazkirus. Under the leadership of Harav Yosef Heller, it has since become a renowned institution of Torah study serving students from around the world.

In 5760, the Kollel moved from its original building on Union between Kingston and Brooklyn to its current location. In the two decades since, the Beis Medrash has seen much wear and tear as thousands of young married men spent the first year of their marriage in the Kollel, learning Torah for a full day.

Feeling the acute need, a group of Kollel yungeleit, in conjunction with members of the Kollel Minyan, began to work on having the Kollel renovated and upgraded, as befitting for a place of Torah study.

It began with small projects, such as purchasing a new water machine and a printer for the Otzar Hachochma computer program. But the yungeleit quickly started tackling bigger projects, beginning with installing a new floor.

A major part of the funding was supplied by the Kollel Minyan, headed by Rabbi Noach Fox, the minyan’s dedicated gabbai. The remaining funds were raised by the yungeleit from a number of generous donors.

Over the past few weeks, the Kollel has been transformed, with a beautiful wood floor replacing the older one. Even as the renovations were going on, learning in the Kollel did not stop for a single day, with yungeleit simply moving their table over from the occupied areas to continue their studies.

After close to two weeks of work, the installation was completed this week. The seforim were returned to the bookshelves, and the tables and tables and chairs were outfitted with cloth “socks” to prevent them from slipping on the gleaming wood flooring.

“In addition to the new floor, the Kollel library was upgraded, with old, worn-out seforim being brought to shaimos, and hundreds of new titles purchased,” Rabbi Fox told Anash.org.

Sources told Anash.org that many other plans are in the works for the coming weeks, including redoing the Kollel’s windows, building new bookshelves and other essential improvements.