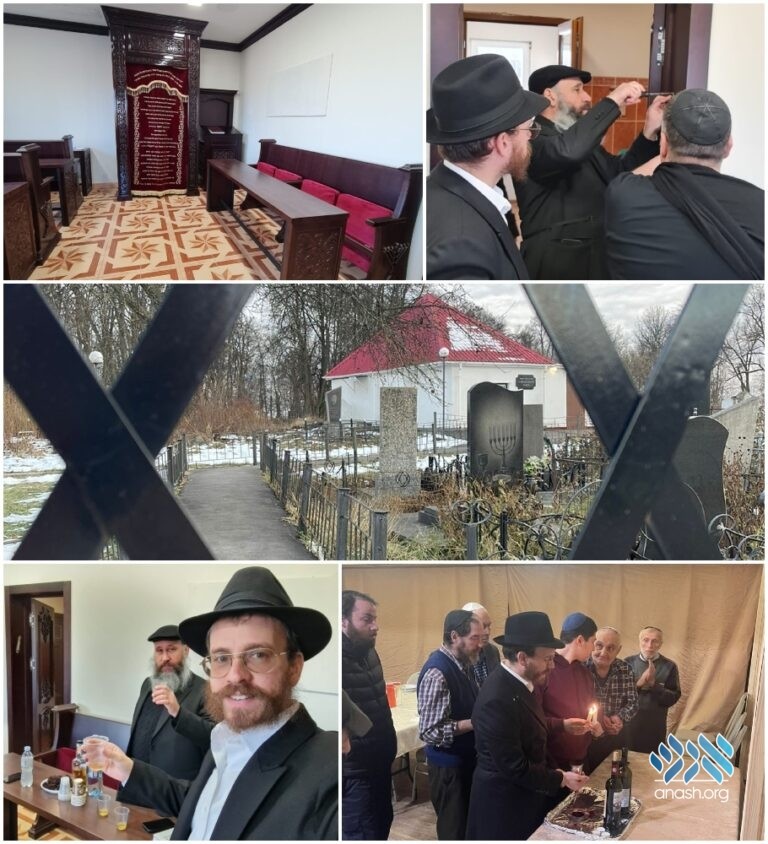 Following an uplifting Shabbos Tes Kislev at Mitteler Rebbe’s Ohel in Nizhyn, a newly renovated Shul was dedicated on chag hageulah Yud Kislev in close proximity to the Ohel.

On Sunday, Yud Kislev, the chag hageula of the Mitteler Rebbe, a new shul was inaugurated near his Ohel in the cemetery of Nizhyn in the Chernigov region of Eastern Ukraine.

The dedication followed an uplifting Shabbos at the Ohel, with over 30 Yidden gathering in Nizhyn despite the ongoing Russian invasion and constant bombardments. They spent the Shabbos davening, learning and farbrenging, marking the birthday and hilula of the Mitteler Rebbe on that day, Tes Kislev.

The group mainly consisted of Yidden from Kyiv, Ukraine, headed by shliach Rabbi Motti Levenhartz. Meals and accommodations were arranged by Rabbi Schneur Zalman Deitch, who worked tirelessly to arrange all the needs of the guests, taking care of all their needs while the temperature outside dipped below zero.

On Sunday, Yud Kislev, the day which chassidim celebrate the anniversary of the Mitteler Rebbe’s release, a newly renovated shul was dedicated for the benefit of visitors to the Ohel.

The renovation took place in recent months, taking advantage of the lower number of visitors during the war. It was organized by Rabbi Deitch, who also oversees the hachnasas orchim in Haditch, near the Alter Rebbe’s Ohel.

Besides for bringing the Shul up to date, the project also included which included a complete renovation of the hachnasas orchim complex, strengthening the structure, setting up proper plumbing and water infrastructure, new furniture, air conditioning and much more. The renovation was sponsored by philanthropist Yitzchak Mirilashvili and generous donors from around the globe.

On Sunday, the project was completed and the inauguration was held. Rabbi Meir Stambler, chairman of the Jewish Federation in Ukraine, hung the mezuzah at the entrance of the complex, and the small crowd shared a l’chaim in honor of the chag hageulah.