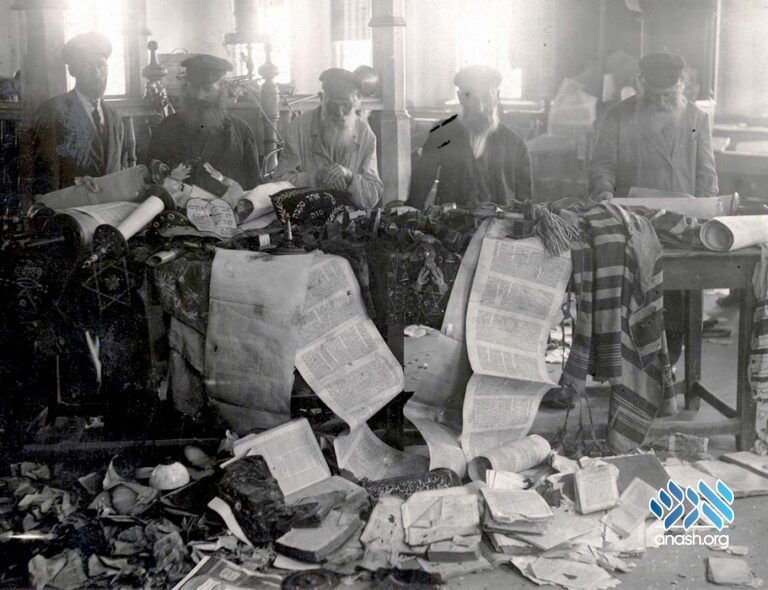 Shliach Rabbi Shimon Posner writes of a miracle that his great-grandparents experienced as the Jews of Nikolayev were attacked, and why is he thinking about a Ukrainian pogrom before Yud Alef Nissan.

The turn of the century – last century that is — was bloody. And fearful. Some fifty years ago, when I was a boy, on a quiet, breezy, Brooklyn night, as her Sicilians neighbors played outdoors, my grandmother spoke of the impending pogrom of that era — some seventy years earlier.

The Jews would know a pogrom was underway in other parts of the city when down feathers would fly by their windows. It was unclear to me whether the “pogromers” would rip open the pillows in a fit of pillage or that their Jewish victims would empty their own pillows in an attempt to warn Jews across town of where things were holding: smoke-signal style. Fearing for their lives, many Jewish families in her hometown of Nikolayiv placed “ikones” in their windows, icons of the Christian faith, with the hope that the camouflage would spare their homes. Their lives. Their children. It didn’t work; their homes were attacked.

Her father, the shochet of the town, refused to in any way separate himself from his G-d and prepared with his children to pay the price. No ikoneh was placed on their windowsill. Remarkably, their home was spared.

Years later, I heard that her father had taken holy writings from the Rebbe at the time (the Rebbe’s great-grandfather in-law) and placed them in the folds of his caftan as he embraced his children.

The Rebbe, the one our generation knows, was then a three-year-old boy. With several other women with small children, his mother took her young family to hide in the basement of a pharmacy. The pharmacist was risking his life to allow them to hide there and was understandably nervous of the crying children.

Hiding crying children creates tragic stories; ask Eli Wiesel. The three-year-old Rebbe made rounds in the basement, silently gesturing to the children, calming them, reassuring them. So they could be quiet. So they would not endanger the others. So that they would be spared.

Monday evening is the Rebbe’s 120th birthday. (Remarkably, it is also my grandmother’s yahrzeit.)

Thankfully, things today are relatively quiet in Ukraine. Yes, those words sound absurd, but the most pertinent question one can ever ask is compared to what? Compared to 1905 things are quiet in the Ukraine and we pray they quiet down yet more and yet more.

Many years later, in the 1950’s, the Rebbe wrote to a member of Israel’s Parliament that those early experiences aroused in him a deep yearning for Moshiach, because only Moshiach could make the lives we have all lived make sense.

Chances are the hand-made matzah at your Seder is from the Ukraine; it often is. The Rebbe was passionate about Jews having the hand-baked shmura matzah for Seder night. I cannot tell you I understand why, but I can tell you I know that it is important.

Thank you for allowing me to share with you a piece of Jewish legacy from the same region: the breadbasket. Like Seder matzah, referred to by Kabbalists as the bread of faith, stories of the greats imbue us with faith.

I wish my grandmother’s beloved native land the blessing of peace. I wish you the gift of faith and I wish all of us unqualified redemption.