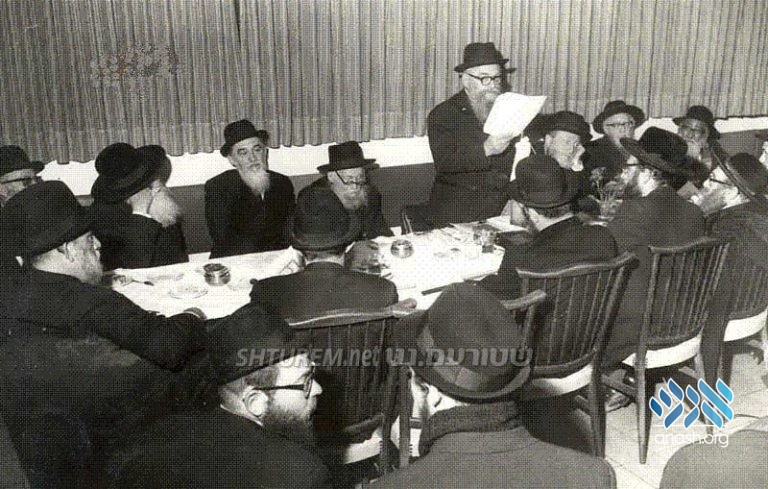 Born in Erlau, Hungary in around 5668/1908 as Chaim Yehuda Feldman, Reb Chaim Yehuda was a talmid of the famed Pressburger Yeshiva, at that time headed by Rav Akiva Sofer, who passed away in 5720/1959. In his youth, he became involved with the Zionist movement and went up to Eretz Yisroel, where he began writing in Hungarian for newspapers there.

In the 1960s Chaim Yehuda was in a motor vehicle accident and needed to be treated in the United States. He had seen the work of Lubavitch in Eretz Yisroel after the Six-Day War, how they cared for the orphans of those soldiers that fell during the war and was very taken by that. He got in touch with Lubavitch and spent Tishrei 5728/1967 with the Rebbe.

In later years he would stay with the family of Reb Shia Korf, a”h.

Chaim Yehuda went into yechidus with the Rebbe, where he told the Rebbe about his writing career. The Rebbe gave Reb Paldi a shlichus, that he uses his writing abilities to educate people that the idea that the founding of the State of Israel was the “beginning of the redemption,” etc. was counter to the teachings of the Torah. He then proceeded to write tens of articles in Israeli newspapers and received much encouragement from the Rebbe in his work.

One example of the Rebbe’s encouragement at that time was when the Rebbe thanked him for his writings during the War of Attrition between Israel and Egypt, which took place from Adar 5729 to Av 5730. The Rebbe wrote that we see from this how the Israeli Government conducting themselves this way only brings more casualties.

In 5730/1970, after the decree of Mihu Yehudi was passed in Eretz Yisroel, Rav Paldi organized the Vaad L’ma’an Shleimus Ha’am, together with Mr. Tzvi Nedivi, Rabbi Shmuel Cheifer, Rav Nochum Trebnik, and Rabbi Yitzchok Yehuda Holtzman. The group’s mission was to organize public opinion and to try to get the Knesset to change the law that allowed non-frum conversions to be recognized in Eretz Yisroel.

A highlight of his activism was at the farbrengen of Yud-Tes Kislev 5737/1976, when the Rebbe called up Reb Paldi to speak to the assembled about his work for Mihu Yehudi. (See video clip below.) The Rebbe “introduced” Reb Chaim Yehuda as a yid “who is moser nefesh to change this strange law that for some reason was entitled “Mihu Yehudi.””

The Rebbe said that since “Mitzvah Bo Yoser MiB’shlucho” = that the Mitzvah should be done by the person commanded, even though to do it by a shliach would suffice, that Reb Chaim Yehuda himself speak to the crowd since he does such great work in this field.

It wasn’t easy for Reb Chaim Yehuda to speak in front of the Rebbe, and he was quite emotional while he spoke. When he finished speaking the Rebbe commented that Reb Chaim was ah greener, somebody who wasn’t familiar with the ways of America and that he didn’t stress the importance of money that’s necessary to run the organization! The Rebbe went on to say that of course, everyone here will do what he can and help this worthy cause. The next day Reb Chaim Yehuda received two checks as contributions to his work, one from the Rebbe and one from the Rebbetzin.

In 5738/1978, he founded and published the “Shleimut” magazine, which gathered and compiled articles about Shleimus Ha’Am from other publications and published it. This he did until his passing in 5743/1982, when he passed away, never living to see the decree abolished.

Reb Chaim Yehuda was buried on Har Hazeisim, where for many years a delegation of his counterparts in the “Vaad” would visit his resting place on his yahrtzeit and say kaddish.