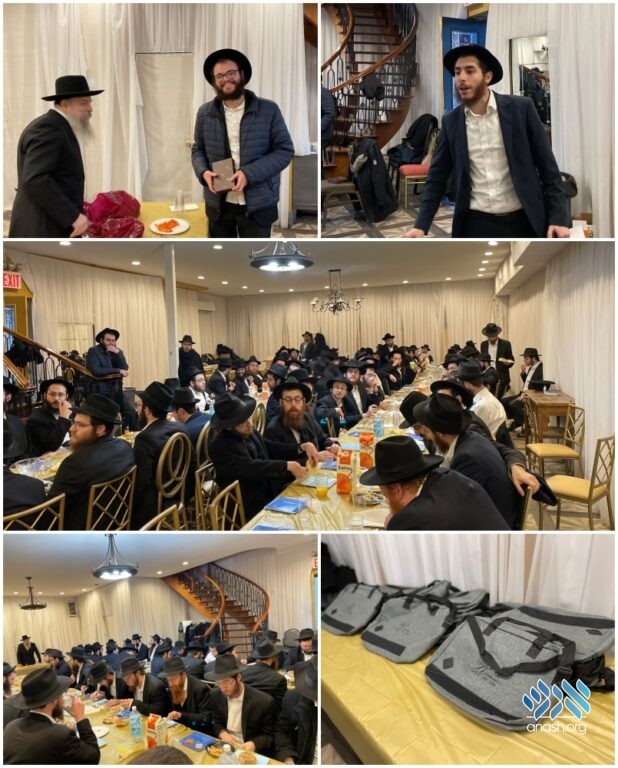 After an amazing start to a new year of Released Time, the program’s teachers and recruiters gathered for a Hakhel lunch to brainstorm how to take the program to the next level.

After an amazing start to a new year of Released Time, the program’s teachers and recruiters gathered for a Hakhel lunch to brainstorm how to take the program to the next level.

“It’s all about taking it to the next level,” said Mendel Pink, as he spoke to his fellow Released Time teachers at the exquisite lunch. “Boruch Hashem this past week we got 14 new sign-ups to the program, this week we have to get 28.”

The Lunch was held at the home of R’ Moshe Rubashkin and was led by the programs director Rabbi Shazak Zirkind, “First and foremost, all of you in this room deserve a big Thank you. The hard work you put in to ignite the Neshamos of the hundreds of children does not go unnoticed”.

Rabbi Zirkind continued to speak on the importance of putting in extra effort to make a lasting effect on the children. During his talk he shared the following story:

R’ Nachum Gross, a Lubavitcher Chossid was recently stopped on the street by a middle-aged man asking him if he was ever a teacher in the Bronx. R’ Nachum replied No, then thought for a moment and said half-jokingly, “but I used to do Released Time there every Wednesday”. Hearing those last words, the middle-aged man became a bit tearful and replied “I remember clearly I was in your Released Time class! Thank you so much for everything you taught me, I still remember the love you gave me for Yiddishkeit!”

“The lasting effect the Released Time class has on children is unimaginable” concluded Rabbi Zirkind, “Now it’s up to all you.”

At the lunch, the Bochurim were informed about the next month’s new initiatives and programs such as the winter Day-camp, Chanumah house parties and Bikur Bayis, the Shabbaton, and a new reward system for the children to encourage their friends to join the program.

The teachers and recruiters left the lunch invigorated and determined to continue growing in their special and holy Shlichus.

Released Time staff and Bochurim give special thanks to R’ Moshe Rubashkin and family for opening their home and being so hospitable.