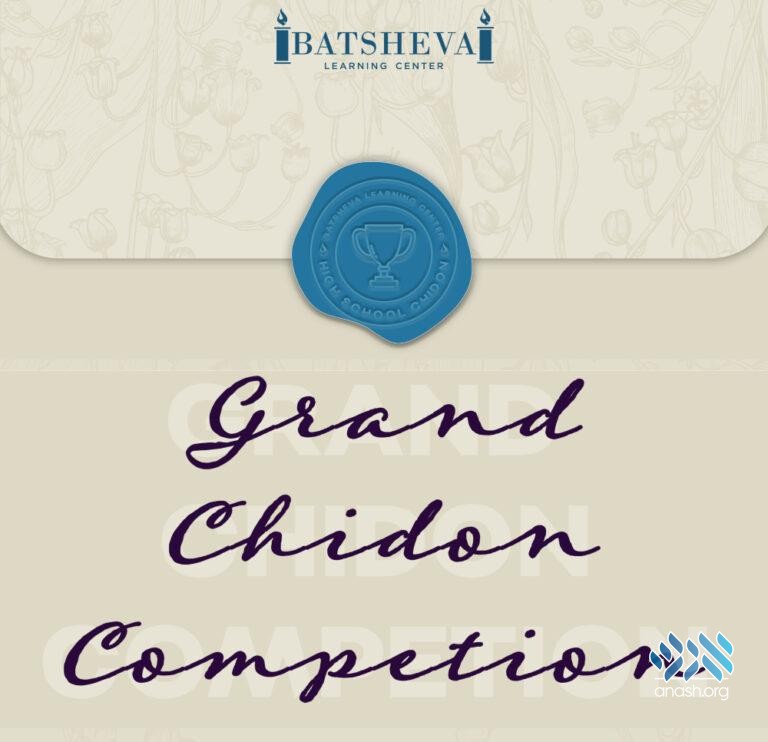 After five months of studying the Frierdiker Rebbe’s ma’amarim, girls from 18 Chabad High Schools around the world will be gathering virtually for a grand Chidon and grand championship.

5781 was not the year any high school girl imagined it to be. With events cancelled, classrooms restructured and activities limited, many girls dreaded the changes that came with the new school year.

Amongst the many extracurriculars that had to be redesigned was the annual high school Chidon. For four years, the program has been steadily growing, with high school girls from around the country participating in the challenge to master an entire sefer.

Upon concluding five months of studying, the girls gather for a weekend retreat where they reflect on their experience, bond with their peers and celebrate their impressive accomplishment.

After last year’s retreat had to be cancelled due to Covid concerns, Batsheva Learning Center decided to reimagine the Chidon experience and challenged students from around the world to reimagine what their high school year could look like.

“Challenge yourself this year to master a sefer of Chassidus that will transform your worldview. Your year, reimagined. Connect with dozens of high school girls around the world with the same goal. Your high school experience, reimagined. Leave with the confidence and the skills to open any sefer on your own. You, reimagined.”

This was the slogan the organization used to pitch this year’s Chidon to 18 schools around the world, including high schools in England, South Africa and Australia. Over one hundred students took on the challenge, committing the next five months to mastering the entire Sefer Hamaamarim Yiddish of the Frierdiker Rebbe.

Every 4 weeks the girls take a multiple-choice test on the material and those that pass participate in a monthly virtual event. The virtual events feature art workshops, musical performers, farbrengens, interactive games and more. They offer an opportunity for the students to interact with girls around the world who share their passion for learning and reflect on the learning they’ve done together.

Mushka Brook, a participant from Los Angeles, CA, said: “Chidon has really made me feel like Chassidus is mine. It’s not just for my father or my brothers to learn. I have the ability to open up a sefer and understand it on my own. It’s such an incredible gift.”

Another participant from Montreal, Bracha Cohen, said: “I realized that when I put myself to it and just started learning, I was able to do a lot more than I thought. It really changed my mindset.”

This year’s grand championship will take place virtually on 23 Adar/March 7. It is always a heartwarming and momentous night for the family and friends of the Chidon contestants who get to watch the girls demonstrate the knowledge they’ve gained through the Chidon. Most importantly, it’s a night for the girls to reflect on how they’ve grown from the experience and the impact it will have on them in the future.

Devorah Silberstein, who recently took over running the Chidon after its founder, Chaya Ceitlin, moved to Israel, said, “Something transformative happens when you give a high schooler a sefer, and tell her that she has the ability to master it. On her own. For most girls, they are in the “drivers seat” of their learning process for the first time. And for many, once they’ve tasted the excitement of learning on their own, it’s not their last.