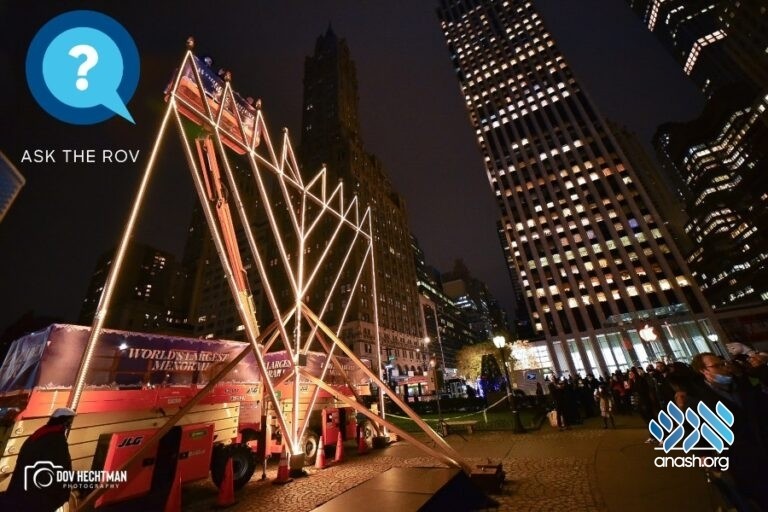 Ask the Rov: Should a bracha always be recited when lighting a public menorah?

There is an age-old custom for the menorah to be lit in shul after mincha, though it doesn’t fit the original mitzva of “ner ish ubiso,” which is fulfilled by lighting by one’s personal residence. This practice is not mentioned in the Gemara, but it is discussed by the Rishonim and codified in Shulchan Aruch.[1]

Rishonim note that the Chanuka miracle occurred in the Beis Hamikdosh, thus it is appropriate to commemorate it in the shul, which is a miniature Mikdash, and in the presence of the many who gather there.[2] Some add that it is motzi those who cannot light themselves,[3] or for travelers who are staying in the shul building.[4] Furthermore, this serves to publicize the miracle, especially today that people don’t light outdoors anymore, and some view this as the primary reason for lighting in shul.[5]

When lighting in shul, a bracha is recited. But reciting a bracha on a minhag is the subject of debate, so why do we make a bracha at the shul lighting? R. Shlomo Zalman Aurbach explains that this isn’t an independent minhag but rather an extension of the original mitzva, in which case all agree that a bracha may be recited.[6]

While some later poskim hold that a bracha should not be recited due to doubt, and others arrange to have a minyan for maariv at the lighting so it will like a shul,[7] many rabbonim accept pirsumei nisa to be the primary aspect for which public lightings qualify on their own.[8] Indeed, by the Chanuka Live program with the Rebbe watching, menorah lightings took place in outdoor non-shul areas (e.g. Eiffel Tower) with a bracha.

While pirsumei nisa still requires a tzibur (i.e. ten people) to be present, some poskim include women and children over the age of chinuch since they are also obligated in ner Chanukah.[9]

In any event, the participants do not fulfill their obligation by a public lighting and should be informed that they must still light in their homes.[10]