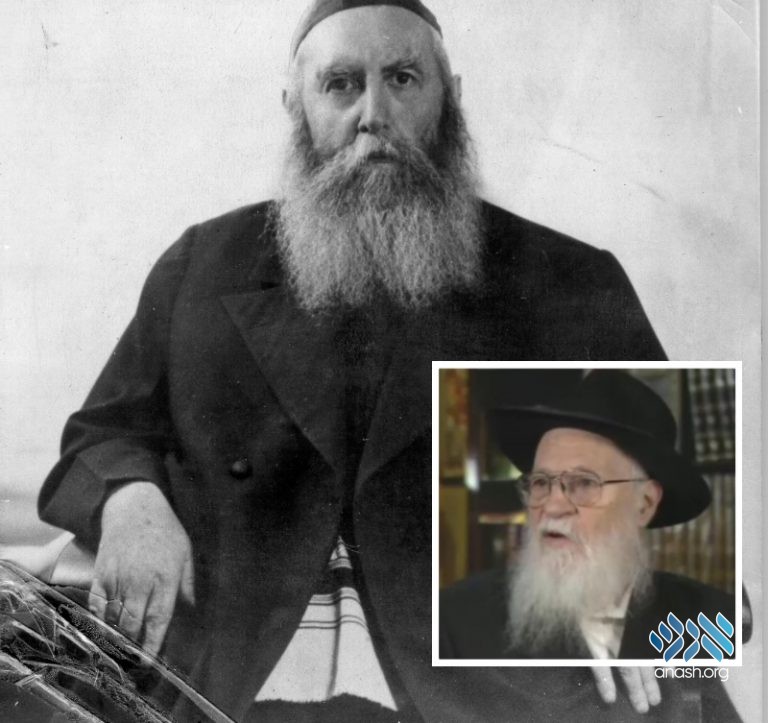 A fund in memory of Reb Gedalya Korf will encourage the wearing of full-size tzitzis garments as the Rebbe had told him and Reb Dovid Raskin 70 years ago.

The Mitzvah of tzitzis is the third and final paragraph of Shema. Its four corners represent G-d’s reign over the “four corners of the universe.” Its garment represents G-d’s essence, which is beyond our capacity to grasp, and therefore can only envelop us. The fringes are conduits, portals through which He channels His essence to us below.

Sunday, 4 Shevat, 5710 – January 22, 1950, five young men had just arrived from Russia and were ushered into the private study of The Previous Rebbe on the second floor of 770. Each was introduced by name, their father’s name and their family name. The Rebbe placed his holy eyes on them, nodding knowingly as their names were read. These were the children of his closest Chassidim back in Russia. These were Temimim who had miraculously escaped the evil claws of Nazism and had now arrived safely to New York, to The Rebbe’s inestimable delight.

Six days after that Yechidus, Shabbos morning the 10th of Shevat, The Previous Rebbe passed away. But not before he had personally witnessed, and blessed, a new “bridge” between the spiritual grandeur of Lubavitch in Russia and the “goldene” America.

A decade earlier, upon his arrival to these shores, The Previous Rebbe declared that “America iz nisht Anderesh,” America is no different. Six generations of Chabad Rebbes in Russia led their spiritually intense, uncompromisingly sincere following of tens of thousands of Chassidim. They were immersed in a warmth and joy that was as vibrant as it was loving. Tragically, it was decimated by the War. But now it was being transplanted onto American soil.

The five Temimim that had arrived were: Gedale Korf, Sholom Morozov, Yizchok Pewzner, Berel Junik and Dovid Raskin. Their arrival and Yechidus with the Previous Rebbe was immediately followed by a seamless transition into becoming needed “foot solders” under the tutelage of the new Rebbe. Indeed, this began a life-long trajectory for each of them as they fulfilled major leadership duties placed upon them by The Rebbe. Seven decades later it could be said that these were the original pioneers of the “seventh generation” of Chabad Chassidus in America.

In those early days of endeavoring to spiritually enhance the then, American-based, student body in Tomchei Temimim, a “reconditioning” effort to fully represent the sacred ideals of Lubavitch in Russia, was led by these five “originals.”

Today, thousands of Temimim comprise The Rebbe’s army of Shluchim in over 100 countries throughout the world. They trace their life’s selfless devotion to Yiddishkeit to the early 50’s when The Rebbe’s fearless worldwide leadership was launched with this small cluster of Temimim. Four had already passed when on the 5th of Nissan, 2020, Covid-19 mercilessly snatched Rabbi Gedale Korf a’h, the fifth and last from our midst. Otherwise well, 90-year-old Reb Gedale succumbed, within days, to the disease. With his tragic passing, the last of the pioneering, original Temimim transplanted to America left us.

Within months of his father-in-law’s passing, The Rebbe called Gedale Korf and Dovid Raskin to come into his office. The Rebbe was standing in front of his desk which was entirely covered by the Previous Rebbe’s tzitzis. It was a shock to have been called by The Rebbe, but “the exhibit” that the Rebbe had prepared for them, really caught their rapt attention. The Rebbe told them that he wanted to show them the unique features of the Friediker Rebbe’s tzitzis.

The Rebbe had already measured the garment. He showed them the width was 63 centimeters (25 inches) and the length, was double that, 50 inches. Rabbi Chaim Naeh, a renowned expert on Torah measurements, sizes an Amah at 18 inches, The Rebbe advised. But The Friedeker Rebbe chose a much more stringent measurement as was evident in the width of his tzitzis being 25 inches. The length, two Amos long, was 50 inches.

The Rebbe noted that the 50-inch length of the tzitzis included the round hole one uses to don it. Although, The Alter Rebbe does not include this hole in the measurement of the tzitzis garment, The Rebbe explained, evidently the Previous Rebbe relied on Rabbi Naeh’s measure of an Amah being 18 inches for his tzitzis’ length, as each side of the hole had a remaining 18 inches of cloth and in this way completed two Amos in length even without the hole. Affirming they had understood, The Rebbe then tasked them with publicizing this practical information.

The five pioneering Temimim who merited to be educated in the teachings and ways of Chassidus in the cold darkness of secret cellars, surrounded by Chassidim whose lives ended with the ultimate Mesirus Nefesh, brought the Lubavitch of old, in its original form, to our seventh generation of Chabad-Lubavitch in America. They exhibited, by living example, what a true Tomim and a genuine Chossid is. Through their life’s examples “America iz nisht anderesh,” began to materialize.

Reb Gedale published the details but remained unhappy with its dissemination. Throughout the years, he felt somewhat guilty not having fully fulfilled The Rebbe’s request of him. On a recent interview for JEM’s “My Encounter” project, he expressed that the publicity was not sufficient and he regretted it.

At his Shloshim, the family announced an initiative to promulgate this yet to be fully delivered message from The Rebbe, personally vested in Reb Gedale and Rabbi Dovid Raskin a”h.

Perhaps due to its being less visible, the Mitzvah of tzitis is often left “unsung.” But given its representation of G-d’s essence and His Infinite blessings, channeled through its holy strands, it is certainly worthy of our focus.

Soon after Rabbi Gedale’s untimely passing, his son Rabbi Yaakov Korf who also had been struck by Covid 19 tragically passed away. The Rebbe’s undying teaching that darkness can only be pushed away by light, now requires a double measure of uniquely powerful light and blessing.

In these harrowing times, this initiative offers an auspicious opportunity to spread the Rebbe’s message regarding the proper measurements of this central Mitzvah of tzitzis. Through it, we can materialize all of its powerful brochos, while keeping the inspiration of the “bridge to our past,” very much alive. Please help spread this message.

During this Pandemic, we can draw down urgently needed blessings for our community, our people and for the entire world.

Should you, or anyone you know, be interested in acquiring properly-sized tzitzis (size 25 or larger), a memorial fund was established to assist anyone needing assistance to purchase it.

For more information and/or to request your purchase of these Rebbe recommended sized tzitzis, please email “The Gedalye and Yaakov Aharon a”h Fund” at RebbeTzitzis@gmail.com.